Here's the first of potentially several posts about Mike Davison's WARBAND! This time, I show off how we re-jiggered the round sequence as well as a few other house rules that we put in place. In reality, we started with the other house rules first and added the new round structure around them to make it all feel suitably grotty.


Combat Round Sequence Of The 41st Millennium


One of the great things about the WARBAND! rule set is how closely it hews to the BX rules that are so near to the hearts of so many gamers, myself included. However, for those of us who also have a fondness for 40k and other Warhammer properties (Rogue Trader is in my heart, y’all), a slightly more Warhammer-y round structure may be desired. What follows is a combat encounter round structure that more closely (though imperfectly) mirrors the round structure of 40k, but retains much of the BX sensibility.

At the start of the round, a small amount of planning and housekeeping needs to happen. First, take note of any effects that happen every round (such as “damage over time” effects or psychic powers) and resolve them. Next, players must declare whether their characters will be making a Fighting Retreat (see below) or using any psychic powers in the round (though they do not need to announce which powers they will be using). Please note that the same sorts of declarations must be made for henchmen as well. Finally, each “side” in the combat encounter must roll 1d6 as their initiative roll for the round. In each Phase below, the belligerents will act in the order of their side’s initiative scores. 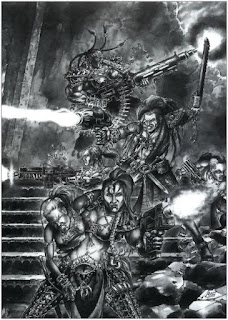 Characters may move up to their combat movement speed.

Moving Into Close Combat Range: If their movement takes a character within Close Combat range of any foes, they must stop.

Fighting Retreat: This action must be declared before the Ranged Fire phase begins. The character may move half their normal movement rate out of Close Combat range and does not provoke any attacks for doing so.

Characters may make Close Combat attacks against foes within Close Combat range. Characters’ gear largely determines the number of attacks they get, though some monsters, robots, vehicles and other opponents may have attacks defined differently.

No Weapon or Improvised CC Weapon: One attack per round.

Combat Knife / Chain Sword or Axe / Power Fist /  Power Sword or Axe: Character gains one attack per round which must be made with the weapon indicated. A character is limited in the number of Close Combat weapons they can wield by their number of hands or other similar appendages.

Lightning Claw: Character gains two attacks per round which must be made with the Lightning Claws. A character may gain the benefit of wearing no more than two Lightning Claws, despite physiology. If wielding another weapon in a non-Lightning Claw hand, follow the rules for additional attacks normally.

During this phase, any Psykers who declared during Round Setup (see above) that they will be manifesting a psychic power may do so, following the normal rules. However, if the Psyker took an injury earlier in the round, they must resolve a Psychic Power Test (roll 1d20 equal to or less than the character’s PSY score) to manifest the power. If the character fails the PSY Test, the manifestation fails; however, the character may choose to open themselves up to the power of the Chaos Warp. Characters who do so may still manifest their psychic power, but at the cost of losing one point of a random ability score (roll 1d6; 1 = STR, 2 = DEX, 3 = CON, 4 = INT, 5 = PSY, 6 = CHA). During Round Resolution (see below), be sure to record all of the effects of such a loss.

Witches shall not be denied.

At the end of the round, resolve any lingering effects that may be pertinent. Sides that have suffered a significant loss may have to make Morale rolls based on the following conditions:

Finally, record the effects of any changes to the characters involved to their game statistics. For example, if a character has suffered damage or loss to an Ability Score, this is the point where that loss takes effect (ie, that damage does not take effect until this phase).

Once the Round is resolved, return to Round Setup for the next round or exit the combat encounter if all opposing sides are defeated or routed.
BX Chaos WARBAND! Warhammer WH40K