Another Unwise Experiment I Don't Have Time For - Or, How To Be Your Own Hargrave

17 July
From time to time, I think we all feel like starting over, right? Like trashing everything we've been working on and starting from a blank slate. I feel like, in a lot of ways, that whole "this is what my life was like seven years ago and here's what it's like now" thing from Sunday night was about that, but not really about this blog. It was about an idea I had.

What if we started over with RPG gaming completely. What if we went back, way back, and started where published RPGs began, with that beautiful old white box (or woodgrain box if you prefer) and the three little books inside? Three classes, a handful of spells, some misleading rules... What if we went all the way back to that rule set and started there. Started.

Because it's not going to take long for we to need to add something. It'll probably be a monster, right? Maybe some spell or magical treasure? It's probably not going to be a class, but maybe a race? Doesn't matter, because it's coming.

And here's where the experiment starts: you make the thing you want to add yourself. Let the answer be your answer. Challenge yourself to make the thing and to make as many other new things as you may need.

After enough of these alterations, additions and arcana accrue, the experiment is to see at what point does the game you're playing cease to be Whitebox OD&D and start playing another game entirely. And not in an "ooooh, you added something, not it's a whole different game!" way, but in a very real way, just like how Gary chided "Dungeons & Beavers" (read: Warlock and Compleat Warlock) for not being D&D anymore. 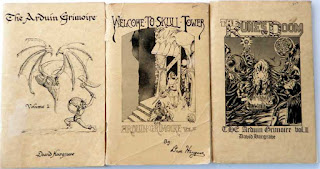 Because you're still kind of playing OD&D, right? But you're also very much not.

This used to be normal. This used to just be the way things were. And in the DIY D&D movement, it's still very much how it is, so I don't really expect that folks who read my blog will find this very revolutionary, because it's not supposed to be.

Instead, it's an experiment in differential gaming. Where does that Dave Hargrave moment exist? How much do you have to add or change to get there? How much of you do you have to put into the thing to make it no longer reasonably interpretable as OD&D? Is it even an interesting distinction?

I really enjoy the idea of a sort of alternate reality D&D where instead of someone else making the decisions that shape D&D, the choices made were the ones I would have made. They may not be the right ones, and that's okay. This experiment isn't about perfection. It's about what I would've come up with, and, frankly, I expect it to fail.