Michelson, Morley and the Winds of DWIMMERMARS

16 May
In 1887, the physicists Albert A. Michelson and Edward Morley, in true model of scientific rigor, sought to test the working theory of the day by a critical experiment. The prevailing theory that scientists of the day used to describe the wave-like motion of light, aetheric theory, posited a medium through which light waves move, particularly in a vacuum. Previous to aetheric theory, all forms of waves described by Physics were known to travel through a medium (consider the very use of the term "wave" as a descriptor for the phenomena and the motion of waters is conjured, is it not?), so was it not meet to attribute to the transmission of light waves a medium as well? How could light travel through a supposed vacuum if there were no medium -- imperceptible to human senses as it may be? After all, we do not instinctively identify air as a thing, as a medium, save by logical inference, primarily in the notable effects of its absence. And yet, even in the absence of air, the transmission of light remains possible, thus the presence of a medium, an aether (after the primordial Greek deity of light), may be inferred. 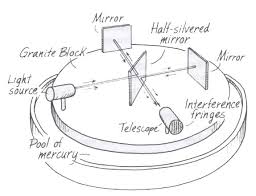 As one invents experiments to disprove rather than prove any theory, so did Michelson and Morley create an experiment to test the aetheric theory that they trusted. They predicted that if one refracted light far enough that its speed could be measured (the speed of light had been calculated as early as 1676 and accurately from 1729), and compared that measurement against those taken of refractions made at different angles, different times of the day, different points in the Earth's orbit and rotation, were aetheric theory correct, then some of those measurements would reflect a slowdown, an amount of drag, a sort of aetheric wind that would make some measurements of the speed of light slower. The Michelson-Morley experiment ultimately showed no difference between any measurements taken in any direction, at any time, under any conditions and thus was the nail in the coffin of a well-regarded and widely-accepted hypothesis. Aether was dead, despite the hue and cry of conservative scientists and future generations of steampunk enthusiasts.

It is undoubted that the Michelson-Morley experiment would be known, particularly for its revolutionary revelations, to the science-minded attendants at the 1889 Expedition Universelle, such as our beloved Professor Kingsley Bridger of the Royal Society (now peaceably returned to the relative safety of the fortress at Mun-Bur from his convalescent torpor within the Dwimmering Mount). It must have been a shock to Dr. Bridger, then to discover that the alien world of Tellus is cursed by no such deficiency of aether. Dr. Bridger's earliest experiments in Tellurian wireless telegraphy quickly taught the good doctor that not only was there an aetheric wind on the planet, but an entire aetheric weather pattern!

Much as predicted by the aetheric theory that Michelson and Morley disproved, were it to have the benefit of understanding the electromagnetic spectrum upon which future work in light and optics would be based, the aetheric wind affects all manner of phenomena. The long-distance communicators employed by the Tellurians, for example, may be interfered upon by aetheric weather, and the airships they fly sail on foils of light, the aether refracting light to create lift unimagined by the men of earth. Even stranger, the aetheric climate may affect and be affected by the electromagnetic emanations of the nervous systems of living beings; thus it is that those acclimated to such an environment may possess a certain telepathic capacity (I must also conjecture that this same capacity, when exercised, is what gives rise to the powerful mentalists of Tellus).

Professor Kingsley Bridger has learned much of the nature of the aethersphere of Tellus, and yet its greatest secret lies hidden in the depths of the Dwimmering Mount. Now that he has recovered from his suspended animation and nigh-mortal injuries, perhaps Dr. Bridger shall discover these secrets, the features of the Tellurian aether that Michelson and Morley ensured that no other Earthman would learn.
DWIMMERMARS