30 April
This post will not be revolutionary, it is merely me discussing the rules that DWIMMERMARS appropriates from other OD&D-ish games. As a reminder, all of the player-facing dice rolls (as I intend it) will be d20's and d6's to keep it as old school as possible. This makes damage and weapon rules of exceptional interest here, right? Well, here's some words about it. 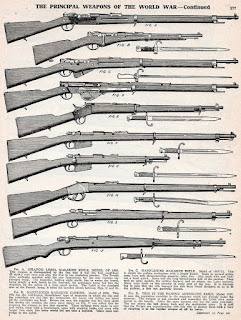 Some definitions before we go too much farther. Obviously, we have the distinction between melee and ranged weapons, but largely we're going to treat these types of weapon the same, just use them at different points in the combat round. Instead, we're concerned with three different sorts of weapon at this stage: light weapons, hand weapons and large weapons.

Hand weapons are the easiest to sort out. They are used at the normal point in the initiative and combat round order, whether they are melee or ranged weapons. All hand weapons do 1d6 damage (bonuses for high Strength or Agility or range [see below] apply normally) and require only one hand to wield. At the Judge's discretion, certain weapons may be wielded with two hands and be treated as Large Weapons (see below).

Light weapons are small affairs and may only ever be wielded in one hand, things like daggers or saps or small holdout pistols. All light weapons do 2d6kL (roll 2d6, keep the lower of the two rolls; modified for high Strength, Agility or range as normal) during normal combat situations, but allow the wielder to act before any character using a heavier weapon during the appropriate phase of combat (ties follow standard initiative order). Further, if the wielder of a light weapon has Advantage on his attack roll (for surprise or any other reason), the weapon is treated as a Large Weapon for purposes of determining damage (see below).

Example: Osterhagen has sneaked up behind the leader of a group of swinemen and strikes the unaware fiend with his dagger. Since the swineman leader is not aware of Osterhagen's attack, he has Advantage on the attempt and, since he is using a light weapon, he may treat it as a large weapon for purposes of determining damage! Phil, Osterhagen's player, rolls 2d6 and gets a 2 and a 5, and thus Osterhagen scores 5 damage against his foe. In the next round, since Osterhagen is still wielding his dagger, he gets to attack before the swineman leader does with his battleaxe in the melee portion of the round. Phil rolls a hit and then rolls 2d6 for damage. This time, he rolls a 3 and a 6; sadly, Phil ignores the 6 and Osterhagen deals 3 more points to the swineboss, a total of 8 points before the villain could even react!

Large weapons are weapons that, by definition, must be wielded in two hands, things like halberds, pikes and rifles. When a hit is scored with a large weapon, roll 2d6kH (roll 2d6, keep the higher die value) for damage (modified for Strength, Dexterity or range as applicable). Due to their large size, however, large weapons always act last during their normal phase of the combat round (ties follow standard initiative order). At the Judge's discretion, damage done in excess of that needed to fell a foe may be applied to another nearby foe. Similarly, at the Judge's discretion, some large weapons may strike as a Light Weapon (before any weapons heavier than light) only during the first round of a conflict. It is not recommended that the Judge allow both of these options, however.

Example: Fonso the Remarkable is fighting a brace of swinemen while Osterhagen dispatches with their leader. Enduring a hail of blades from the swinemen, encountering only the most superficial of injuries, Fonso strikes back against the brutes. He swings his heavy maul into the side of one of their number, and Gabriel, his player, rolls for damage. He rolls 2d6, getting 4 and 6 for his rolls, taking the higher and adding one to it due to Fonso's prodigious strength, dealing a total of 7 damage! The maul strikes true and crushes the swineman's rib cage with enough force that the Judge rules that the strike carries through and strikes the proximate swineman, though without enough force to slay that fiend as well.

At Long Range for any ranged weapon, that weapon strikes without penalty or bonus to either attack or damage rolls. At Medium Range, however, both attack and damage rolls gain a +1 bonus. At Short Range, these rolls gain a +2 bonus, making them exceptionally deadly!

Turns out, this post was in no way about the weapons of DWIMMERMARS, and I should probably rectify that in a future post. Also, it became apparent that a post about combat procedures should happen soon because, in a way, this was one.
DWIMMERMARS OD&D