21 April
I've been talking about DWIMMERMARS a lot over on DSR's G+ page and Twitter. Last night, the first DWIMMERMARS session was streamed on DSR's Twitch channel (twitch.tv/dsrcast). But WTF is DWIMMERMARS anyway? After some prompting from +Christopher Mennell, I figure it's about time to talk about it.

I'll be honest: I never read any of the Barsoom novels before I got started on my own personal OSR, and even then, it wasn't until a few years ago, after I'd started this blog.

I'll be honest: I can't run a game straight, the way it was intended. I have to chop it up, rearrange it, swap out parts I don't like for parts I do, make it my own.

I'll be honest: my fascination with World's Fairs began with reading Devil in the White City, but there's so much cool history to the World's Fairs that I just got hooked. It's like looking at a snapshot of how scientific and societal innovations shaped history over time.

I'll be honest: I just can't stop monkeying with rules and so I'm always looking for an opportunity to test them.

I'll be honest: DWIMMERMARS is what happens when all of these things get together and give me the opportunity to run with it. 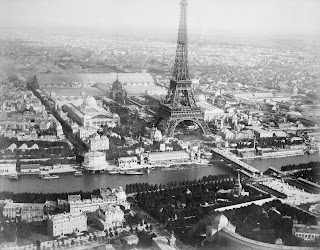 After its maiden voyage on the morning of May 8th, 1889, the 2nd day of the Expedition Universelle, it would be decades before another lift would make another voyage up the height of the Eiffel Tower. That ascent would be accompanied by phenomena throughout the Champs de Mars. One reporter from Le Monde Illustre reported that as that fateful traverse began, the arc lights pulsed brightly several times -- despite the glare of the rising morning sun -- before flaring in a bright flash that burst many bulbs in a hail of glass shards and blue crackling electricity. One of his compatriots from Le Figaro was, at the time, at the pavilion of the Theosophical Society. The Le Figaro reporter was regarding a series of stone artifacts, recently rescued from Neptune's clutches, that the Theosophists purported to be relics of Atlantis or Mu or Lemuria depending on one's source. At the moment of the arc lights' eruption, their hellish lightning corruscated through the Theosophist's pavilion, channeling through the unnamable, inscrutable runes, previously invisible, across the stony facades of those forgotten objets. Those unlucky few who crossed the threshold onto that lift did not merely ascend the tower, but rather were transported, accelerated at a rate hitherto unwitnessed by man, up into the heavens, on a bolt of blue and violet fury that tore its way skyward, beyond the limit of any attendee's vision.

The lift and her doomed entrants would not be found anywhere in the arrondissements of La Ville Lumiere. Mr. Eiffel's engineering marvel would allow her visitors to ascend no higher than her second platform, and then only by the stairs. Arc light bulbs would be replaced, as would the glass in the Theosophists' pavilion. Time would pass and soon  the articles in Le Monde Illustre and Le Figaro would be forgotten, for other feats of scientific wizardry and happenstance would soon cloud the popular consciousness.

For the passengers on the lift, however, these events were eminently memorable. When they regained their senses, they found themselves naked, lying in the multicolored dust under an alien sky. They had arrived on the foreign badlands of Tellus, their only path home through mythical Dwimmering Mount, the looming stone colossus on the western horizon.

And that's all we have time for today. Next time, I'll get into particulars.