Thoughts on Running One of the Fiddly-er Old School Systems 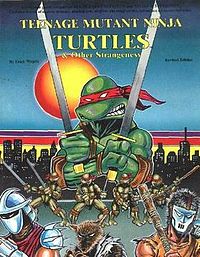 This past Sunday, I ran the second session of +Drink Spin Run - An RPG Talk Show Podcast's "Drink Spin Run Actually Plays" live stream where we played Palladium's 1986 classic Teenage Mutant Ninja Turtles & Other Strangeness RPG. Continuing problems with our Twitch feed aside (I apparently have no idea how to get sound to our Twitch feed anymore), we had an awesome session that made me realize a few things about (a) how Palladium games actually work and (b) how my DMing has changed in regards to success and failure.

I used to think of Palladium's hand to hand combat system as being really clunky and fiddly. With strikes, parries and dodges along with maneuvers and stuff they don't actually ever explain in the rules (as far as I can see), I thought of Palladium combat as a bit of a mess. What I wasn't seeing is that, in TMNTOS and Palladium's other games, combat is less "roll to hit AC" and is more of contested "I roll to hit against your roll to dodge." Add to that tracking actions and determining whether someone gets automatic parries that don't use up an action and whether their dodges use up actions and stuff like that and now you're looking at something that seems far too complicated for my "fewer rules, more play time" brain.

Because you knew there would be a "however."

In play on Sunday, as we were rolling to strike and then to parry and to strike and to parry yadda yadda yadda, we started to think about what that flow of combat looked like. Sure, the lowbie mooks with tranq guns did their jobs: they showed up, got off some pot shots then got killed. But the big bad muscle man who killed the Krav Maga Byker Lionz's mentor? He was a fight worthy of an awesome action movie. Punch! Block! Kick! Block! Punch punch block! The guy hit like a truck, and the players were glad for their automatic parries and did everything they could to use up some of the villain's actions on dodges (because while there are automatic dodges in other Palladium games, there aren't in old school TMNTOS).

Though the Krav Maga Byker Lionz left the battle bruised and battered (The Slab was in only slightly worse shape), they walked away with the feeling of being action movie badasses, like a cross between John McClane & Jet Li.

I've been experimenting with the "fail forward" concept of a lot of story games for awhile now. I don't like the idea that skill use in games should be a simple, binary, "succeed or fail" result. I get that it's simple, I get that it's easy, I get that we're almost hardcoded to understand "yes" and "no" and to look askance at "maybe" or "kinda." But in my experience, we get "maybe" or "kinda" far more often than a cut & dried "yes" or "no" and, if anything "maybe" and "kinda" produce far more interesting result.

Take the following situation: King Louis of the Krav Maga Byker Lionz is driving the van, trying to get away from the police after the shoot-out & fight with the Slab and his minions. "Roll Pilot: Truck!" What happens if he succeeds? "Yes, you successfully drove the van?" Nope, that's dumb. What if he fails? "You cannot drive the van now?" That's even dumber.

I'm pretty sure that most folks reading this will have made the conceptual leap to only roll for a skill when it's reasonable or necessary. You don't roll Pilot: Truck to start the van, or to pull out of a parking space, or even to drive down the street; you roll it when you're in a police chase and you're about to pull off a maneuver.

That makes sense. That's what every DM worth his salt is already working on doing if not doing already. The thing is, I usually just stop there. The player tells me the cool thing he's going to do to get out of the situation, overcome the obstacle, pull off that sweet maneuver, whatever, then we roll dice and he did it or he didn't as the dice tell us.

Failure here is pretty boring. You just don't do the thing. It's far more interesting, however, to have done the thing, but pay a price for it. Maybe you pulled off that tricky driving maneuver, but now you're leaking oil or gas and now you've got to make a hard choice about how hard to push the van before you have to ditch or ruin it. Maybe you blow a tire and are spewing sparks and the cops can find you easier because you're making a spectacle of yourself.

The concept of "failing forward" as most folks presented it didn't make a lot of sense to me because they seemed to place the failure on the character side, rather than the dice side, of the action. Really, the "failure" is a "failure to roll the way you wanted to" which only means that things don't go the way the player wanted them to. The player is stating the "goal state," and the failure on a dice result is merely telling us that the "goal state" hasn't been attained, which can easily mean that the "goal state" has been muddied with all sorts of stuff that wasn't accounted for the first time around. This is the "forward" part of the "failure:" rather than simply indicate that a character doesn't do a thing, it's often a more interesting choice to complicate the waters and introduce new things that weren't there before, to give the players more, new and interesting things to react to.

I'm really not a fan of folks who say "OSR is this" or "OSR is that." Those rabid 1e fans (for example) who think that OSR is only 1e really irk me and bore me with their interpretation of old school. In order for the OSR to be interesting to me at all, the "old school" part needs to refer to the old school-i-ness" of games and what that means for the way they are played rather than reference any specific rule set, modern or old. Is DCC not OSR because it's not 1e or BX? If so, fuck the OSR, it's stupid. If Marvel Super Heroes is OSR because of the way it approaches the game, then fuck yes, OSR.
podcast TMNTOS