This Old Moldule-Ing B5: Horror on the Hill, Tres Brujas

12 February
First, enjoy this. Second, be aware that [SPOILERS] await below for stuff other than B5.


One of the cooler features of B5: Horror on the Hill are the witch sisters on the Hill. Why aren't there more witches in RPGs? In the context of B5, the witches fill an interesting role: they're not necessarily good nor bad, nor even somewhere in between. They can be allies, they could be enemies, they could be "quest-givers," all depending on how you play them. The significantly less awesome part of the way the witches are presented in B5 is the way they're presented. Instead of being strange wise women that villagers tremble at the thought of, we're treated to, well... we're treated to a pair of friendly grandmas. 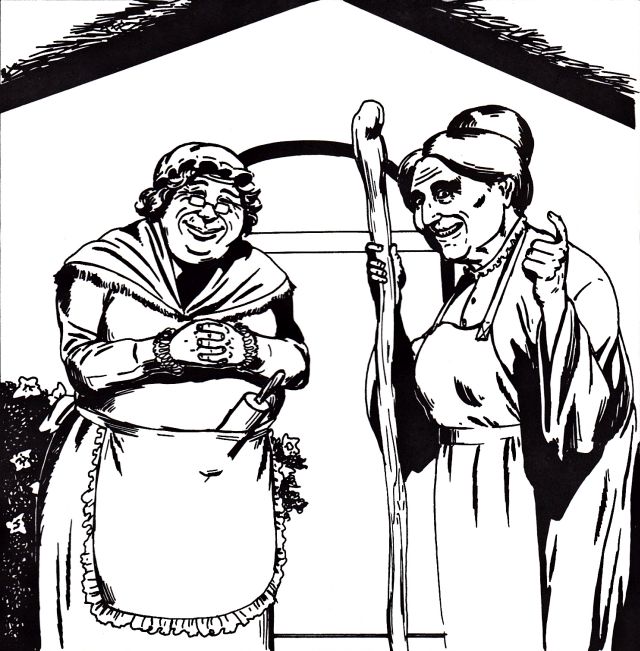 The description of their abode presents a doily-frilled, tea time chamber of nothing-anywhere-near-like horror. Do you see that rolling pin? Ridiculous. I can't imagine who these witches would engender fear in, except for my middle school-age kids who don't want to have their cheeks pinched and smooched.

In DCC # 66.5: Doom of Savage Kings, +Harley Stroh writes one of the coolest witches in any RPG product ever. Ymae, the Mad Widow (is she ever even directly referred to as a witch? If not, well done, Sr. Stroh!). She offers to help the PCs, but at a price, and it's a wonderfully witchy price: marriage to one of the PCs. Doesn't this sound like it belongs in a folk tale? Then, the help she offers requires a further task of the PCs, gathering the hair of seven corpses (these can be pre-existing corpses or the hair of dead PCs) which is again wonderfully folk tale-y. Then, she'll weave the hair into a rope that can be used to bind the demonic Hound of Hirot. Got that? Corpse hair rope that binds a demon, all for the price of marriage to a PC.

This is the model we want our witches to take, not cheek-pinching, tea-and-cakes grandmas.


Three Witches You Shall Meet

For not a few reasons, I like to have witches come in threes. Whether it's because of the Sword song above or because of the symbolic significance of threes, I can't tell. I think it's probably because I just naturally organize things into threes. So, there are three witches. And, because it will make sense out of some stuff later on, the three witches suffer under a curse. And, because of [curse rules], they suffer under a ban preventing them from talking about their curse. Their curse also ensures that PCs will meet only one of the witches at a time.

The witches may be sisters, they may not be. We'll talk about that later. Here are the things we know about the witches for sure:


For fear of getting snagged into writing and re-writing this post over and over again, I'm going to stop right here. In near future posts, we'll be exploring the witches some more, you'll learn more about Hanuszka's Secret and The Horror and -- I promise -- we'll actually get to the dungeon sooner rather than later.
5e B5 Horror on the Hill This Old Module