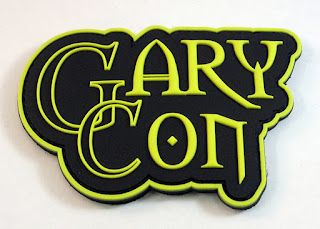 Yeah, I know I've sort of let the B5 posts fall off. I really mean to get back to this. I have a post about cavemen half-way finished (yes, yes, I know I can just finish it off but it led to some research that I hope will bear some really interesting fruit), and I still want to talk more about the witches, so there's definitely more coming.

However, it's GaryCon time around these parts.

That means a few things.

First, it means that I'm rushing to get every order of the Metal Gods zine and Black Sun Deathcrawl that I'm delinquent on out the door in the next few days. We even opened up BSDC to a few more sales (I found 20 "reserve copies" I had on hand and made those available for sale) in anticipation of the 3rd printing (absolutely no difference between the 1st through 3rd printing as far as I know). Once that's all done, I'm going to start implementing a new strategy for keeping better track of orders and how many copies of zines I have on hand to hopefully tighten a few loopholes in my attention span that some things seem to fall through.

But that's not what you came for, is it? You wanted to hear about GaryCon before GaryCon is GaryCon, right? Cool, 'cause that's what I'm here for.

This year, the Muszkiewicz family hope to leave our fair city of Ypsilanti, MI, at the crack of 8a. We'll be accompanied by our friend +Brooke Schuette (who's totally +Kathryn Muszkiewicz's "mini me," even though neither will admit it) to help Katie & I keep an eye on Stan during stuff. Brooke was one of my original Quasquetherion players and even was part of the Iron Coast crew for a time and is really excited to hit up her first gaming convention.

After stopping in Chicago for lunch (because), we plan on getting to the Grand Geneva in the mid afternoon, giving us time to unpack, unwind and maybe go for a swim before the obligatory "meet up with everyone at the bar" thing that happens every year on Wednesday. If you're going to be there, stop by and say howdy. I'll be the "hulking Pole" with the baby.

The only event that I have planned -- as in "on the books" -- is the podcasting seminar that takes place some time on Thursday. I should really find out exactly when that is. I'll be repping +Drink Spin Run - An RPG Talk Show Podcast despite being the more abrasive of the show's hosts. Apparently, there will be a happy hour event after this, too. So, good stuff. Let's hope they have good beer on tap.

The only "off the books" thing I have planned is co-DMing the Saturday night DCC "DougKon" nonsense with +Doug Kovacs and other folks. I'm sure I'll get roped into running stuff other nights, but this is the only night that running shit is a lock, and here's why: Last year, +Jobe Bittman lamented to me that we just kept playing the same games over and over. We play DCC every night. We might play Metamorphosis Alpha during the day. That's fine and all, but there are so many other goddamn games out there  that get neglected. At a convention, you've got this ready and willing collection of folks who show up to this specific gaming convention precisely because they're amenable to playing disparate games, particularly old school ones. Last year, we managed to get in some Traveller as run by the ever-awesome +Todd Bunn, but other than that, it was pretty much just DCC & MA.

It's time to get some different shit in.

I talked to Jobe about what he wants to run/play, and compared it to my own list. There's not a lot of overlap, but there is some. Some of the overlap, though, was of a "if you run that, I will play," variety. Jobe plans on running Rolemaster at some point, now, which is pretty cool. +Jason Hobbs (or, if you prefer, "Scott Hubbs") also requested some games, and I liked his requests, so they're on my list of "yeah, I can run that" stuff.

Without any further ado, here's the stuff that I'll have "on deck" and gtg at a moment's notice:
Other stuff I want to play or run:
There's no way I plan to play/run all of these things. If I get three or four games in all weekend, honestly, I'll be happy.  I'll try to keep folks in the loop about stuff I'm doing so you can either live vicariously through me or so you can participate, but I don't hold out a lot of hope for it.

Hope to see you at GaryCon 2016!
convention