This Old Module-ing B5: The Horror on the Hill; Foundation Edition

22 January
A few weeks ago, on +Drink Spin Run - An RPG Talk Show Podcast, we played this neat game I called "This Old Module" with +Stan Shinn & +Nathan Panke of Rogue Comet games (here: http://www.drinkspinrun.com/2016/01/drink-spin-run-s2-e52-this-old-module.html). Not only was this one of the most fun episodes to record (if only +Donn Stroud didn't have this weird hangup about "spoilers" and could contribute), but people seemed to like it, too. I've always liked the idea. I liked it back when I had it the first time in the dawn of this blog (I called it "This Old Module" back then, too), when I talked about how I would update/personalize/improve B2: Keep on the Borderlands and pretty much every time I mention Quasquethierion (my take on B1: In Search of the Unknown's dungeon of Quasqueton).

In the wake of that incredibly fun venture, I've had a lot of folks (most vocally Nathan) say that I need to bring back This Old Module on the blog or do another round on the podcast and "renovate" a single module as a committee. That sounds like fun, sure, but I feel like "redesign by committee" is a bit beyond the scope of the podcast and I'm not sure if it'll be a productive or fun use of the 1-ish hour we have our guest panelists on for.

And so, instead, I'm bringing it back on the blog and talking about module B5: The Horror on the Hill. If you're not familiar with the module, two gents I have immense respect for have already told you pretty much everything you need to know.


I will not be focusing on what they wrote. Those links are for your reference. (I also thought that James Raggi wrote something about this module, but I can't find it. If anyone can point me in that direction, I'll add it to the list.)

I have my reasons for picking B5: The Horror on the Hill, but I'm not going to go into that, either. Instead, I want to treat this like Bob Vila & Norm Abram did on This Old House. 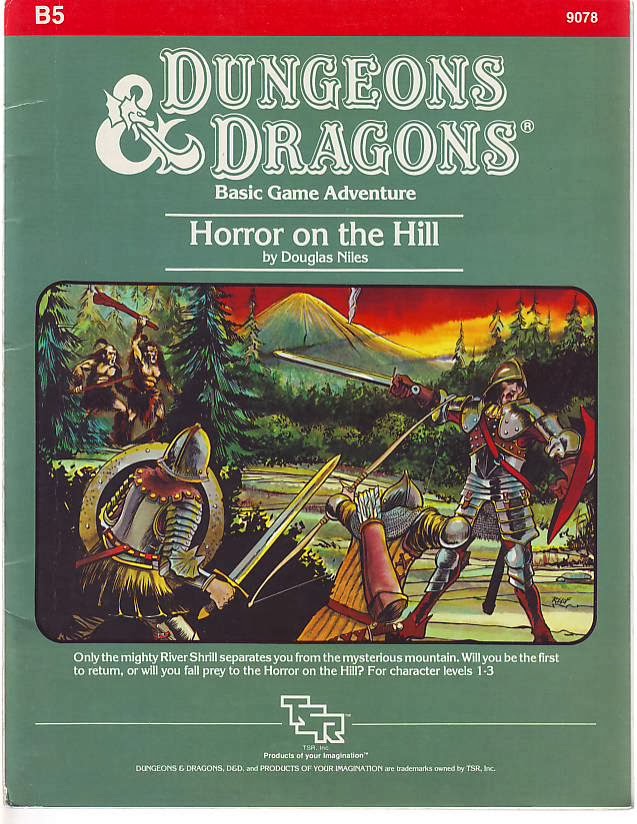 We have a Basic-series adventure module from 1983, written by Douglas Niles. Although its publishing date marks it as a BECMI-era release, since it was released the same year as the Mentzer Red Box (the "B" in BECMI), it was probably designed with Moldvay BX in mind, not that there's really a lot of difference between BX & BECMI (I know, I can catch hell for that remark, but if we're looking at the "BE" in BECMI only, the differences aren't that huge, mostly stylistic). B5 is in many ways an update of B2: Keep on the Borderlands, with many of the additions and "improvements" that TSR -- with this module -- began to introduce across the board. James Maliszewski does a great job calling these out, so I won't waste your time reiterating them.

For this project, we're looking at accomplishing three things:
Many of these changes mean that at times I'll be dispensing with what many (including James) have referred to as "Gygaxian Naturalism" and instead give more of a "fantastic dread" feel. "HORROR on the Hill," remember?

Why work with B5 at all, though? Why not just start over from scratch? Well, much like Norm & Bob would think about houses, this module has good bones. The foundation that this adventure lays down is very solid and worth building off of and its worth "fixing" the problems that we identify later on in the process. Before we get to punching holes in this thing and tearing down walls, lets look at that foundation and figure out the strengths of this one.

Here are the parts that I identify as being the exceptionally solid foundations of the module that we can build up from, working on accomplishing our goals.
Next time, I'll start talking about some of the larger details we're going to change to make the Horror on the Hill a unique and fun modern gaming module.
B5 Horror on the Hill This Old Module