09 August
I know it's been a while since I've mentioned any wargaming stuff here on the Dispatches... Wait, do I ever talk about wargames over here? I'm not sure. I'm clearly far more of an RPG gamer than a wargamer, but my gaming youth lavished just as much love and admiration (if not slightly more!) over Space Marines and Blood Bowl teams as it did over fancy campaign settings and cool module covers. That is to say: it's shit I admired from afar and wished I could get into but money and a lack of folks to play with it kept wargames out of my grasp for a long time. I know I talk about this on DSR from time to time, if only because +Donn Stroud is more of a wargamer than I am, but I figure it's about time for me to talk a little bit about it over here since it's far easier for me to actually document things on a blog rather than on a podcast. 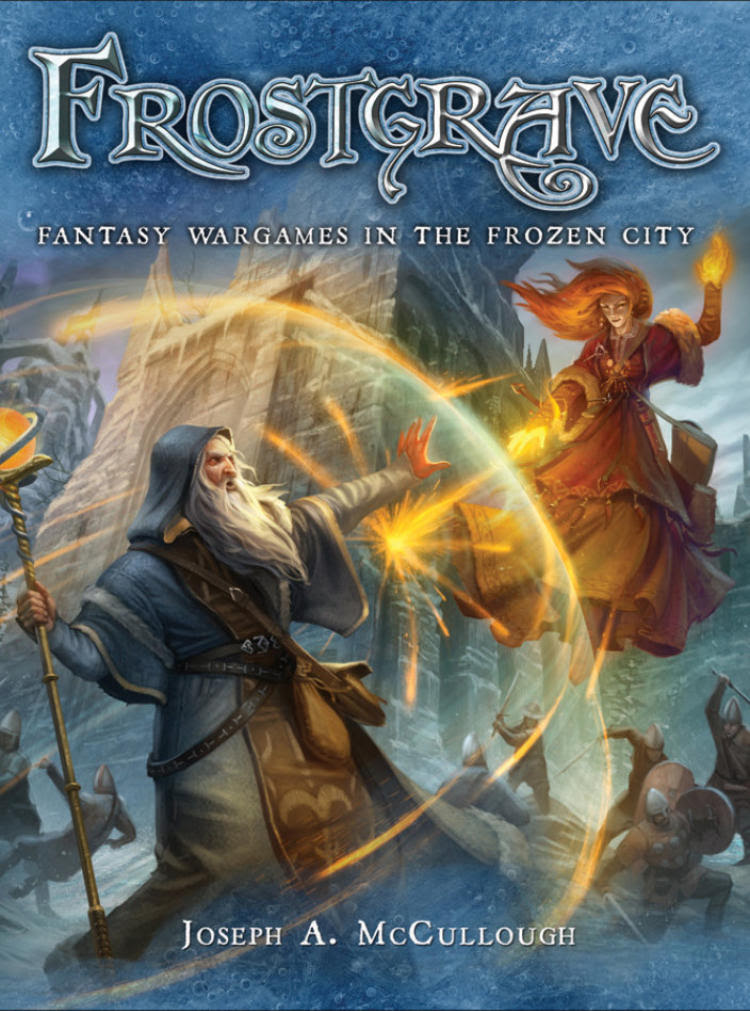 A few months back, I discovered Osprey Games. Yeah, I know. If you're a hardcore wargames dude, you've known that Osprey has been kicking out wargames for years now. I did not. Every gamer who's picked up games or minis in a hobby shop (not a games shop) of the "every sort of crazy hobby under one roof" style knows Osprey Publishing: these are the dude who publish all those guides to what every fucking troop type that has ever existed wore, what their colors were, what the historically accurate this-es and that-ses are, yadda yadda. So, those dudes started making wargames. The draw for me works like this:


So, about Frostgrave. I'm not going to try to sell you on it. You know two of my reasons for digging Osprey games already. Frostgrave is very rules-light and streamlined. I've heard some people think otherwise, but I don't get it. You're rolling at most one die at a time (and it's a d20!), not a fistfull of d6s, the stat line is super short and self-explanatory, etc. So, here's my two-word sales pitch that I said I wasn't going to give; WIZARD FIGHT!

So, I've got fighting wizards, I'm happy. Now I just need some wizards (and henches) to fight each other. While I did participate in Osprey & North Star's "Nickstarter" program (and netted some sweet ass minis!), I've got all these minis from Reaper Bones II (and I bought in to Bones III because I'm a fiend, man!) so I figured I'd start there. Thus, I've started putting together themed warbands, grouping not-so-different stuff together.

I bought the Rats! addon for Bones II because I just can't get enough skaven or ver-men or ratlings or whatever the fuck you choose to call them. The cool thing about the Bones II ver-men is that -- and I didn't realize this at first -- she's a she, with a wide-open robe proving that not only is she a she, but that, clearly, ver-ladies have inguinal nipples. Look it up if you don't know what that means. I figured that she'd have to be a summoner since, really, what sort of magic would ver-men use? Clearly, the most corrupt and corrupting. Cleearly, being ver-peeps, she's not merely a "summoner," but a full-fledged "scummoner."

I'll come up with cooler names for these warbands as time rolls on; the RPGer in me won't just let them sit without having some sort of story behind them. Dwarves, I'll admit, I have a little trouble with because I can't stand a lot of the dwarves stereotypes. No, my dwarves will never speak with an illogical highlands accents. That shit is stupid. I figured that dwarves were perfect for Enchanting magic since that fits the role they traditionally play in myth and pretty much all of the fantasy tropes involving dwarves. Yeah, it's kind of low-hanging fruit, but I think it would be a solid starting warband.

I got a bunch of derro models in Bones II (I'm not sure if everyone did) and I think they're pretty neat models. While I had initially thought to make the derro wizard a summoner (outer dark, aberrations, madness, all that), I decided that illusionist would be stranger and less obvious, so I'm going that direction. These models look like they'll be a lot of fun to paint.

Yes, I already have a bunch of Wargames Factory vikings to use with Domains At War. That's all part of my plan. So, why not build a viking warband for Frostgrave? I got a really cool Red Box viking hero that would make an awesome wizard (probably either a Thaumaturge or Soothsayer; I think either could be cool), but sadly I'm getting away from my vision of using my Bones minis. Still worth doing, though.

I know that I'll end up playing a Chronomancer in Frostgrave. Time magic is always a conceptual favorite of mine and my strategies tend to lend themselves well to time-magic-y thought. The wizard I picked up from the Nickstarter was the chronomancer, and given how much I love the North Star figures, I might just wait on this warband until I've gotten some games under my belt so I know what I want to pair with the wizard, henchman-wise.

Of course, I've got a ton of other ideas as well and am starting on getting some of these things based and primed. Pics probably next weekend.
Frostgrave minis wargames