Though I didn't exactly go out and make a huge announcement about this fact, on Friday, July 17th, my wife +Kathryn Muszkiewicz and I had our first baby, Stanley Isadore Muszkiewicz. Sure, I let some folks around the internet (G+ & Facebook) know, and there have been some pictures on Instagram, but I've not really made any announcement.

For the intervening weeks, as I'm sure most of you all can understand, I've been a bit busy. Stan had a pretty gross bout of jaundice early on and had to spend about a week on a biliblanket, this sort of strange mesh of LEDs that kick out just the right frequency of light to break down the excess bilirubin in his blood stream that causes the problem. Despite being on this thing, he still managed to be stinking cute. Here's an example: 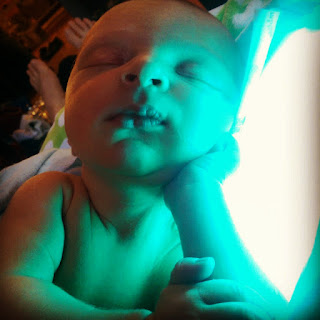 Aside from the biliblanket, we had to get little man out into the sunlight as much as possible (yeah, great, pick the nerd parents to take the kid out into sun, great planning, Nature!) and to the med lab EVERY GODDAMN DAY to get his bilirubin level in his blood checked. Just what every new parent wants: for their adorable super baby to get poked every goddamn day and bled a little.

Once we got the word that Stanley's blood was coming back with acceptable levels of bilirubin, we took off for my parents' house in South Haven, MI (right on the Lake Michigan shore for those unfamiliar with Mittengeography) where we rested from Wednesday of last week until this previous Sunday (7/29-8/3). Yep, for the GenCon period.

It was a bittersweet realization that occurred when we found out that we were pregnant that there was going to be no way we could attend GenCon this year. It would be our third year in a row going, and the little network of awesome folks (the "DCC royalty") that we spend all of every con with were going to be sorely missed. Some folks, we won't see until U Con (+Jim Wampler, possibly +Roy Snyder, etc.) and still more we won't see until GaryCon (+Jen Brinkman, +Bob Brinkman, +James MacGeorge, the Cincinnati crew and possibly even +Doug Kovacs) or later. Yes, the con is cool, but what I miss more than anything else is the people. Y'all is my tribe. If I didn't mention you here, it's not that I didn't miss you, just that I don't know when I'll see you again. Or meet you in the first place. Damn, that's the shit I miss.

With all this paternity time on my hand, you might think that I'd use some of it to get some shit done around the Ministry of Tourism. Well, you'd be wrong. Mostly. Since at least one of my hands was always in use for the past two weeks, I didn't have much time to write anything (as you've noticed by the lack of posts here), but a few projects are moving along more smoothly now as a result of some conversations I've been able to have with folks and the time during long, jaundice-defeating walks where I've just closed my brain off from the world around me to solve how I want to handle a particular topic or whatevs. So, I've got a little more direction. I suppose it also helps that I got burned out on video games during paternity leave; I can put a video game on pause, but I can't necessarily do that to a train of thought, so it was much more reasonable for me to occupy myself with "brain off" activity than I normally do.

That was a lot of words without any baby pictures. Let's make up for that. 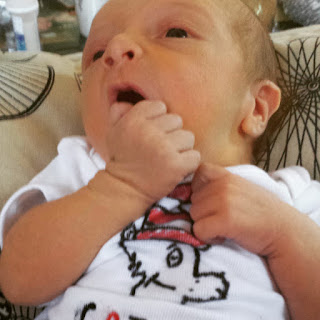 Apparently, his hands are delicious.

I've got a few more thoughts to spill out over the next few days before I resume my regularly-scheduled programming. Some announcements, some work that's simmering. Some stuff I need to confer with my collaborative partners about, some I can just come out and blurt about, but I'll wait on that for tomorrow.

I can say that I'm going to have to change my workload and expect to get more writing done during the day job than when I'm at home. Just need to make sure that no one notices...

This instance of Joesky Tax is brought to you by my increased understanding of jaundice and how much damage it can do to you if left untreated. There's a reason my little man spent a week on a blanket of LEDs.

Amongst the creatures and beings of the World Below, the Bitterblind Fever is so common a malady that most species native to cavernous dark are immune to it and many serve as carriers. To residents of the World Above, however, the Bitterblind Fever can be disastrous, unless they return home to the sunlit realms in short order. Thus, the malady has cut short many expeditions into the deeps, as infected expeditions must backtrack or find a new way upward or face the ravages of the Fever.

Typically introduced via the claws or fangs of a carrier-creature, a character infected with Bitterblind Fever must make the appropriate save (Poison/Death or Fortitude DC 18) or begin to exhibit symptoms. The first symptom is a slight yellowish tinge to the skin, though this is not commonly noticeable in subterranean lighting conditions (everything looks yellow and orange in torch- and lantern-light) and thus the disease is rarely diagnosed at this early stage (-4/20% to all attempts to do so without the proper spectrum of light); upon his next rest, the character will require 1.5 times as much sleep as normal or suffer the effects of sleep deprivation. The following day, he must succeed at another appropriate saving throw (as above) or the effects begin to worsen: his vision decreases bay halves each day until he is completely blind (he will be considered blind if his vision does not extend beyond 5' from his body). Each day beyond this point, the victim of Bitterblind Fever becomes more irrational, impulsive and violent; for each day he fails his saving throw (as above), reduce his Intelligence, Wisdom and Charisma (or Intelligence and Personality) by one until each score reaches a minimum of three, at which point the Fever has reduced him to, effectively, a blathering, violent lunatic.

The most common treatment for Bitterblind Fever is exposure to natural sunlight, but a daylight spell will work as well (a standard light or the light of mundane sources such as fires will not), as will a cure disease. Once the disease advances to the progressive blindness stage, a cure blindness spell may alleviate the blindness, but the disease will progress to the brain damage stage as normal (if you don't want to keep track of where the eyesight degradation is, count it as 1d4+2 days). A cure disease spell cast at any time during the infection will halt the worsening of the disease, but will not undo blindness; cure disease will restore half of the damage (rounded down) done to Intelligence, Wisdom and Charisma (or Intelligence and Personality). It will take a restoration spell or its like to repair all of the brain damage. Sunlight will not reverse any damages caused by this disease.
#joeskytax Joesky tax