13 August
Big thanks to +James MacGeorge for contributing to this idea and +Shane Harsch for having a similar idea at Marmalade Dog Con this year that I'm drawing inspiration from. Here's a semi-ridiculous patron for your wizards and elves to debase themselves to.

The Resplendent Aweswine, fabled and much-storied hog of the gods, is not an animal spirit of the normal, "progenitor of its species" sort so often seen in literary, folkloric and symbolically logical thought. Rather the Aweswine is a specimen of a porcine derivation so perfect, so enlightened and so sublime that even the gods cannot bring themselves to eat him. At home among the eternal rewards and punishments that the gods preside over, the Resplendent Aweswine travels as he wills throughout the universe, fulfilling the inscrutable agenda he keeps to himself, laying down heavy cosmic knowledge on those wise enough to listen and enthusiastically devouring any food set before him. 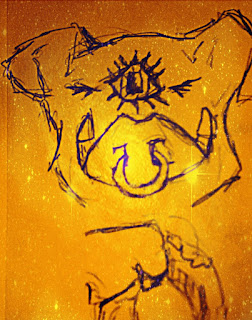 While the Aweswine has earned himself a transdimensional reputation as a sort of pan-cosmic gatecrasher, so awe-inspiring and sublime is he that, wherever he wanders across the face of reality (and sometimes into unreality and semi-reality, as well), a place at the table is found for him and he is welcomed with whatever hospitality the attendant gods, demons, wizards, sorcerers, angels, abstract conceptual beings and even mere mortals can bathe him in. In return, while he dines upon whatever delicacies and rarities the hosts provide, the very clever an the very wise contend with every other feast-guest, clambering for a close position to the Aweswine, that he may be the first to catch whatever golden nugget of enlightenment might fall from the Aweswine's lips. Being perhaps the universe's most perfect storyteller who does not regard himself as such, the Aweswine regales all attendants with tales of his travels, observations upon places few but he dare to tread, nuances of courts infernal and divine, all interspersed with his legendary wit and precise, cutting insights into the nature of all things. "Were one to have an eternity in which to dine and drink with the Resplendent Aweswine," observed Master Guang-Yuan Jo during his tenure as personal physician to the penultimate Pascha of Ur-Hadad, "one might not merely learn all things but have the an impossibly good time while doing so. I am certain that the highest of heavens and most supreme of afterlives await those mortals who die of over-eating and alcohol poisoning in the pursuit of such perfect knowledge; this would be the third-best of all possible deaths, I believe."

Several mortal sorcerers -- including the court sorcerer in the employ of the Gourmand of Shugab -- have sought to enter into the Resplendent Aweswine's confidence and have supplicated themselves before him in hopes of attracting his attention and supernatural patronage. This he can provide, assuming the supplicant meets his criteria. The invoke patron ritual must include an extravagant feast, from which no one may be barred (the supplicant need not invite everyone, but he may not turn away any who deign to attend), be they mortal or immortal, man or beast, monster or saint. Second, the supplicant must entertain the Aweswine (even in proxy, which is most likely) with a story, tale, poem, information, scientific data or the like which the Aweswine does not already know. Finally, the Aweswine requires that the supplicant undergoes an ordeal wherein the supplicant listens to -- and stays awake during the entirety of -- one complete story, history, recounting of scientific or arcane theory, religious revelation or some other sort of wisdom such as the Aweswine is known for throughout the universe; only then can the supplicant truly be considered a follower of the Resplendent Aweswine.

No being of such universal import as the Resplendent Aweswine is without his detractors, however, and such is it that a cabal of "Aweswine deniers" have sprung up within the wizardly community. These deniers claim that the Aweswine is not actually sublime or enlightened or excellent in any way but is rather a ruse carried out by Atraz A'Zul, the mother of spiders, in some mad attempt to control the flow of knowledge. The Aweswine's public statements, the deniers purport, contain just enough truth to be accepted, but are deeply flawed on a number of levels and accounts, thus assuring Atraz A'Zul's dominance in the field of purveyor of secrets and knower of all things. So far, A'Zulites and Aweswine devotees scoff at these claims, which deniers and their supporters point out the omnipresence of spiderwebs in shrines to the Aweswine scattered throughout the cosmos, some even seeming to contain words.