09 June
Have I talked about Yoon-Suin here on the blog before? I can't really remember. If I haven't, it's because I've been waiting for a blog post like this where I talk about one thing to the exclusion of others. I don't do product reviews (that often), so this won't be a review of Yoon-Suin so much as an examination of how it's useful and important from a dynamic hexcrawl point of view.

If you don't own Yoon-Suin or don't know what I'm talking about, here you are. Moving on.

You know I like charts and tables. Some people look at charts and tables as crutches or old school relics that we rely on as we allow our imaginations to atrophy. The idea seems to be that if we, the table-users, had sufficient creativity and imagination, we shouldn't need tables and should be able to come up with adequate variation and innovation for our games without recourse to those selfsame tables. Sure. Why not. Here's the thing though: my own personal perspective and experience can be limiting parameters on one's ability to imagine. As it's been pointed out to me by folks like +D.j. Chadwick, if you're not thinking about the parts that make up Hindi-inspired cosmic owl worshipers, you're not like to create Hindi-inspired cosmic owl worshipers. This, I feel, is where tables and charts come in.

I never feel like a slavish devotion to tables and charts for the sake (dirty word) "balance" or verisimilitude is ever really warranted. If anything, charts and tables exist as fodder for your imagination. Sort of like "Here are facts A, B and C. We still need to know about how they're interrelated."

Thanks for sticking with me here, this is going somewhere.

One of the answers to the challenge of the epistemic regress is known as Contextualism which is the view that justification for a belief as knowledge is only as good as that justification's ability to tie in other things that we think we have good reason to know, creating a sort of self-supporting web of information. Contextualists point to the Dictionary as a great example of contextualist theory: every word within it is defined using other words within it, creating a self-supporting cycle of "this is what this stuff means and we know that's what it means because all these other things explain it and we know what those other things mean because all of these still other things explain them and those still other things are explain by the things we were concerned about in the first place." The basic idea is that if you tie up your logic neatly and tidily in an internally consistent knot, you've got knowledge. 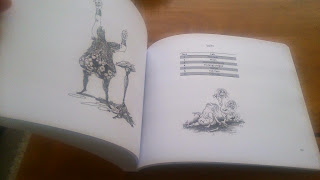 I believe that such syntactical weight should be given to the improvisation, innovation and creation processes. Charts and tables can give you elements to play with, but it is through a conscious, creative action of building interrelations between those elements that details become facts and that facts are given life at the game table. We must interpret the data given to us and it is in that act of interpretation that data-gathering becomes synthesis, where we create something new out of the raw "A, B, C" of our data source.

This is why I love tables.

The best things that tables can be are (a) inventive (introducing new things I might not have thought about otherwise) and (b) useful. Yoon-Suin's tables do these things on nearly every page. The book focuses more on creating interesting and useful social structures than stuff like terrain and lairs because, let's face it, there's enough stuff out there in other resources (or already in our brains) that reinventing the wheel isn't always the most practical thing an author can do. But what is practical? Taking the "here, make it yourself" a few steps further than I've seen it done before and instead of telling me "this kingdom is like this, this other kingdom is like that," author David McGrogan gives us different series of tables to let us figure out for ourselves what each place is like. In essence, he provides an aesthetic, you and I fill in the blanks when set about using the material. He provides the words, you and I supply the syntax.

Social structures can be some of the hardest to write, if only because they are natural outcroppings of that most chaotic of substrata, the human mind, and even more erratic since they're the product of several to many human minds and so you really couldn't help for a more unstable foundation. Yoon-Suin's ability to replicate that instability and erraticness is precisely why I consider it required reading.
#hexdynamics hexcrawl