02 April
As I return from my fantastic trip to GaryCon in the just-as-frozen-North-as-the-place-that-Adam-comes-from-in-the-first-place, I realize that I have a lot of things that I want to talk about. Here's the first in my series of "Let's Talk About [Whatever]" posts that I'll be posting over the next few days or weeks just to get these things out of my head.

Regular readers of the Dispatches know full well that I'm a big fan of the old Judges Guild materials. I was really excited at GenCon 2014 when Joe Goodman announced that Goodman Games was going to release over-sized, coffee table book-sized collections of old issues of the Judges Guild Journal, including modules that were contemporaneous to the issues in question. Specifically mentioned were Tegel Manor, Citadel of Fire and Thieves of Fortress Badabaskor. There was some mention of the book including multiple versions of the same text so that it could be demonstrated how that text had changed over time, because it's common for Judges Guild material to change from one printing to another (which is a very cool feature of this old stuff the more I think of it). 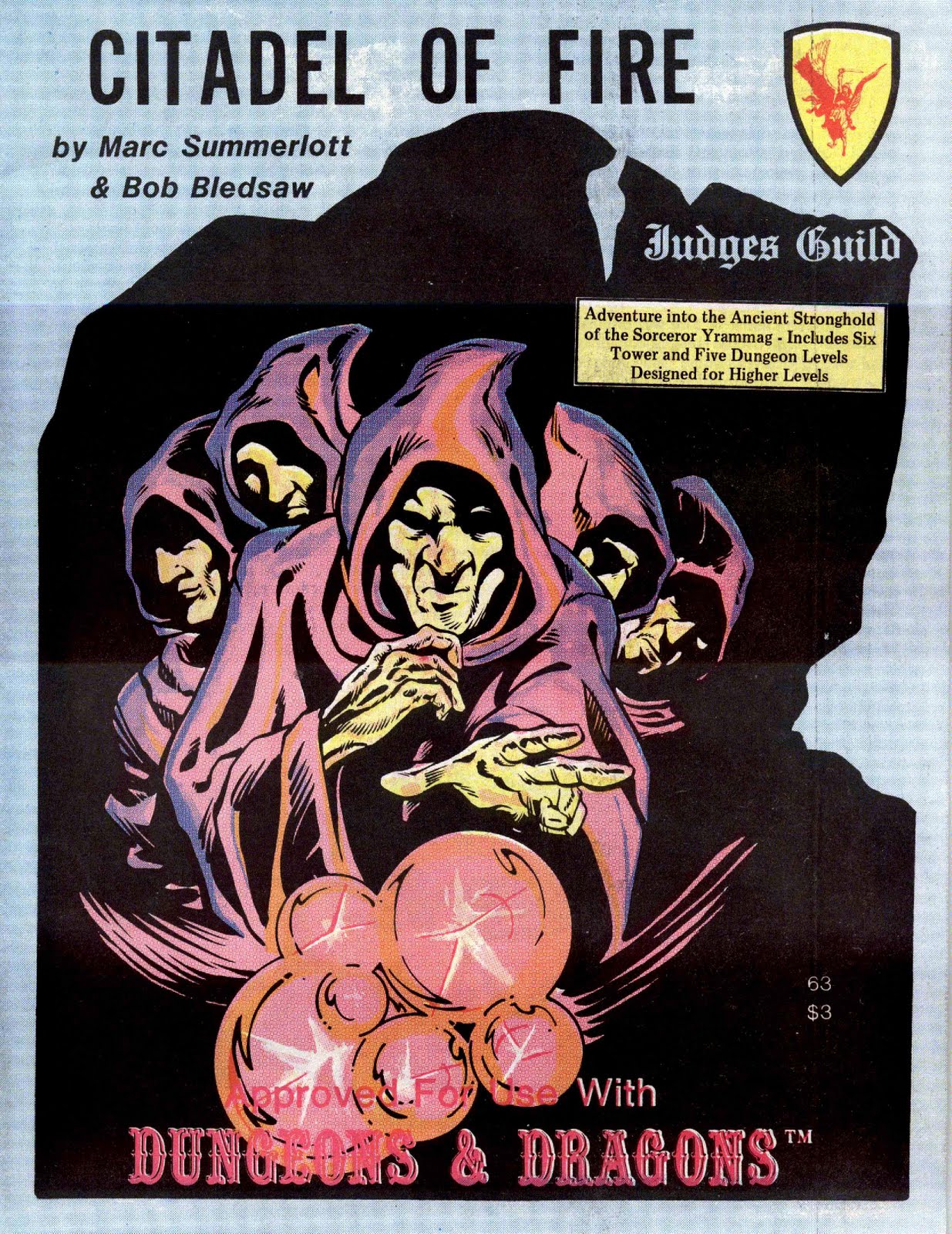 At GaryCon 2015 this past Saturday, the What's New With Goodman Games seminar once again brought up this book, including a demonstration of just how damn big the thing was going to be. As of then, for me at least, the actual details of this book (or even these books, I can't tell) got a little more confused. It seemed to be that Joe Goodman was talking about one book, but that that book would include multiple complete versions of the modules in it. So, first printing Tegel Manor, second printing Tegel Manor, third printing Tegel Manor, all in one book, but that seems way too repetitive and frankly wasteful. You'd also need to do one volume for each of these modules, which is probably not the wisest of ideas.

Joe showed off the size of the book (you can see it in the video that +Jim Wampler posted here on the Spellburn website: http://spellburn.com/2015/03/31/gary-con-vii-whats-new-at-goodman-games/ ) and demonstrated that a page of the book is equal in size to the original printing of the Judges Guild Journal, which is pretty dang sweet. It also means that, at that scale, they're going to have to do something with the pages that the modules themselves are reprinted in. The modules, you see, are about 1/2 the page size of the broadsheet Journal pages. To my eye, this means that they could either print two module pages per page (thus print them as a two-page spread on one page), which would save some space (especially if reproducing each separate printing of the texts), particularly in a book which threatens to have a really high page count. Alternatively, they could print one module page per book page and include the changes from one edition to the next as marginalia.

The three modules being included in this book are some of Judges Guild's earliest work (if not first three modules; time-keeping on these is tough for me) and Goodman has already published two out of three of them (although these versions to which I allude were for D&D 3.xe) until very recently, when Goodman released a version of Tegel Manor (thankfully in the original rules, not any newer rule set) that includes an extra adventure chunk from +Michael Curtis. I have a few comments on this book.

I had not read Tegel Manor before Katie & I picked this thing up at the BlackBlade booth. Somehow, despite my love of all the strange early JG stuff, I missed this one. I'm familiar with the simple layout of Citadel of Fire, and so I expected to see something similar. However, I wasn't prepared for how little I was told by this module, particularly about the stuff it includes. Now, I knew to expect room descriptions that basically just said what monsters and treasure were in each room, and that those would seem remarkably odd to modern eyes, but what threw me were all the seemingly random things that were included, just strange room effects (like "candles light themselves and maniacal laughter from next room;" that's not an actual example, just stuff like that). Also, a list of random portraits with no explanation of what they were or what to do with them. In fact, I realized there was little to explanation of what to do with any of this, almost as if it were supposed to be self-explanatory. Sure, there was a dangling plot hook that a DM could use to drag in PCs, but what to do with this stuff once you did so? That's when I realized that the whole module was really just a big haunted house. Being a big fan of 1986 or 7's horror-comedy classic House II, I realized this could be right up my alley and that I'd never quite understood that these early modules aren't necessarily to be picked up and played as is, but rather drastically reinterpreted by each DM himself, filling in the lost details with his own style and making it fit in with his conception of the way the game should be, just like D&D used to be back then. Whew. Huge sigh of relief. And a small amount of eagerness to use the thing to do something very much Adam-style, but what?

Michael Curtis writes a decent-sized adventure to round out the piece that, yes, does add quite a bit to the page count (about 1/3 of the book), but it's good, useful stuff that draws on material presented in the original release. During the seminar that I linked above, Joe Goodman tells us that his team (I'm pretty sure he specifically calls out the excellent Mr. +Jon Hershberger, but I haven't actually watched the video, so my memory is just from Saturday morning) went so far as to sort out what font to use to best approximate the JG side of the module. So, I was expecting the Curtis adventure to pretty well mirror the JG side. Which was stupid. We don't write things the same way they did back in 1977 or whenever Tegel came out. We can't. Even when Mike tried his hardest to do stuff like that in Stonehell, he still included page after page of "here's how to make sense out of the barebones junk I just fed you" because that's what we do now! Doesn't make it right, doesn't make it wrong. Part of our modern gaming conscious includes making sure our game materials include context. In the original JG Tegel, that context was only the thinnest of an implication; to even write a companion adventure, Mike had to include more information because modern gamer-brains ask the question "Why?" in ways that earlier gamer-brains were happy to just put in the hands of their DM and ride the wave of crazy to victory! So, is the Curtis adventure a perfect fit for the JG side of this module? Eh, mostly. It lacks that "you will only get out of this what you put into it"-ness of the original, but that's both a blessing and a curse. You have less to make up, but you'll have more to customize if you take this out of the implied setting that Mike draws from.

While Goodman is busy working with Bob Bedslaw II to preserve the history and legacy of the Judges Guild -- and hopefully Joe keeps this up for as long as he can -- I'd like to make my plea for Goodman to reissue a personal favorite. Joe, if you're listening/reading, I'd love a reissue of Caverns of Thracia by +Jennell Jaquays. In many ways, I think that Caverns hits the sweet spot of module design and single handedly spawned a series of "best practices" for module design. Hell, we now call "ensuring multiple routes in, out and around inside a dungeon" "Jaquaying a dungeon." There's a reason for that. I know Caverns has a bit more setting info than the earlier stuff (and is thus harder to shoehorn into an existing campaign), but ultimately is really very rewarding. For me, Caverns is the JG module that set the bar and set it high. Everything that came after it falls squarely within its shadow or misses the point of Ms. Jaquays's innovations.

[Also, while we're here, Joe, if you're looking for someone to write a companion adventure to go with a reissue of Caverns, here's my hat. There's the ring. Throwing it in.]
convention Goodman Games Judges Guild