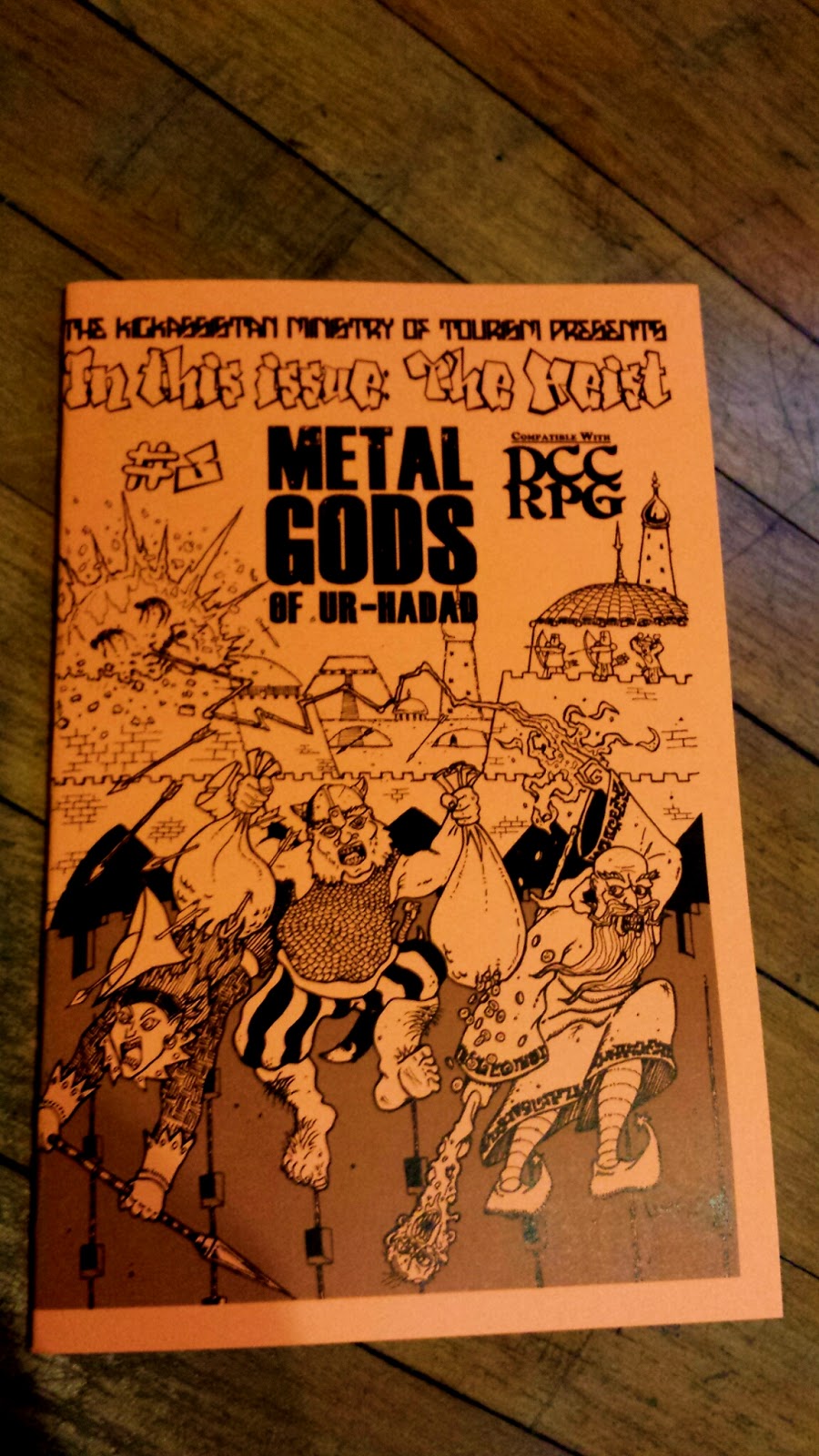 Right, like I said 11 days ago, the Metal Gods of Ur-Hadad zine is only days away from publishing its 3rd issue. Because I like suspense and things of that sort of anticipatory nature, I decided that the zine should be available for sale online at the same time it's available for sale in real life which means at GaryCon. So, as of right now having only halfway checked into whether this is possible or not, I'm planning on delivering Issue #3 into the hands of +Roy Snyder & +Jon Hershberger on Wednesday (at latest early Thursday) so they can have them on sale and ready to rock. Unlike last year, this year I do not plan on selling any of the zines myself, so if you want one the moment it's available, you'll probably be buying it from one of these two excellent gents.

While tonight I have a bunch of work ahead of me prepping stuff for GaryCon (making zines, making DSR flyers for the flyer table, packing, no game prep whatsoever, etc.), the amount that I'm prepping probably belies the fact that, for me, GaryCon is a vacation. I'm not running any on-the-grid events (though I'll probably run some after hours stuff with Doug & Jobe), and I'm not registered to play in any (but I'll totally pop a squat in any game that'll have me when I'm ready to play a game), but that's part of the vacation: I'm not about to run around from game to game like a madman on my vacation! That's ridiculous!

I know this has been a frequent refrain over here on the blog, but I'm about to be a first-time dad. Katie & I are really happy that we're going to be able to make GaryCon (she loves it as much as I do, if not more), especially since we're going to have to miss GenCon this year since our little future man is due the week before. This isn't really a "last hurrah" for us, but it probably is the last convention we'll be attending without the werecub in tow. So I guess that does sort of make this a "last hurrah," but I don't see anything final in it, so I'm not thinking of it in those terms.

As I said, I'm not running in or scheduled to play in any on-the-books games, which is cool with me. I prefer to go with the flow, see what games have open seats and weasel my way into games that are totally full already, if only because, for me, the real reason to go is almost entirely social. Sure, I'm going to play games, but I'm going to play games with folks I like spending time with. There are plenty of other folks that I don't know if I'll get to game with, but it'll be pretty sweet to actually hang out. And then there's the folks who I've wanted to meet in person for awhile who I've never managed to coordinate with in real life, like +Del Teigeler. We've got to work those folks in.

I need to wrap up a few more loose ends before we pack up and head off, so I'm going to have to let you go, but before I do, let me give you my heartfelt pitch for why you should come to GaryCon:

It's like those gaming sleepovers of my youth writ large and for adults.

I have no greater endorsement.
convention Metal Gods of Ur-Hadad zine