25 January
It feels like, these days, my gaming calendar has two calendars: con season and holiday season. Seriously, the holiday season is the only time were there's not one convention or another that I attend each month. This past weekend broke the con dearth of the holiday season with the coming of WinterCon. Now, D&D historians out there will recognize the name WinterCon. It's traditionally run by the Metro Detroit Gamers association and way back in the day (as in THE ACTUAL FUCKING DAY, the 70's) this con was some serious shit. I mean, Uncle Gary wrote 'The Lost Caverns of Tsojconth" for this thing in '76 (before it was renamed "Tsojcanth") and then Allen Hammack's "Ghost Tower of Inverness" was written for WinterCon VIII (1979) as the con's D&D tournament. So, some serious cred.

Sadly, the con has fallen on hard times.

I don't know who runs the Metro Detroit Gamers, but WinterCon is a little anemic, being only a single day. That having been said, I think the con has a lot of room to grow, particularly if it bothered to embrace its past, its serious old school cred, it could go places. I think, however, that this is one of those times where folks don't know how good they've got it because the old school is just too far off their Pathfinder-fogged radar.

Anyway, on to games

I got to the con later than many, but not all. I know +R.J. Thompson & +Andrew Moss were there super early -- well, super-early for me. I don't think I was awake when the con started at 8a. I have a hard time understanding events that start before noon. Or really, pretty much anything that starts before noon. I timed my arrival at Oakland University (where WinterCon is held) to be as close to noon as I could manage, banking on some dealer hall time before Andrew's ASSH session (which I thought was at 2p but ended up being at 1:30p). Last time I'd been at a MDG convention (MichiCon 2013), the dealer hall was a sore disappointment, but this con, there was a friendly face there in +John Reyst of d20pfsrd.com and its attendant store. I love seeing John at cons and not only because he's  cool guy (he is) but also because he doesn't just support Pathfinder, but also makes sure Swords & Wizardry stuff is on hand as well. 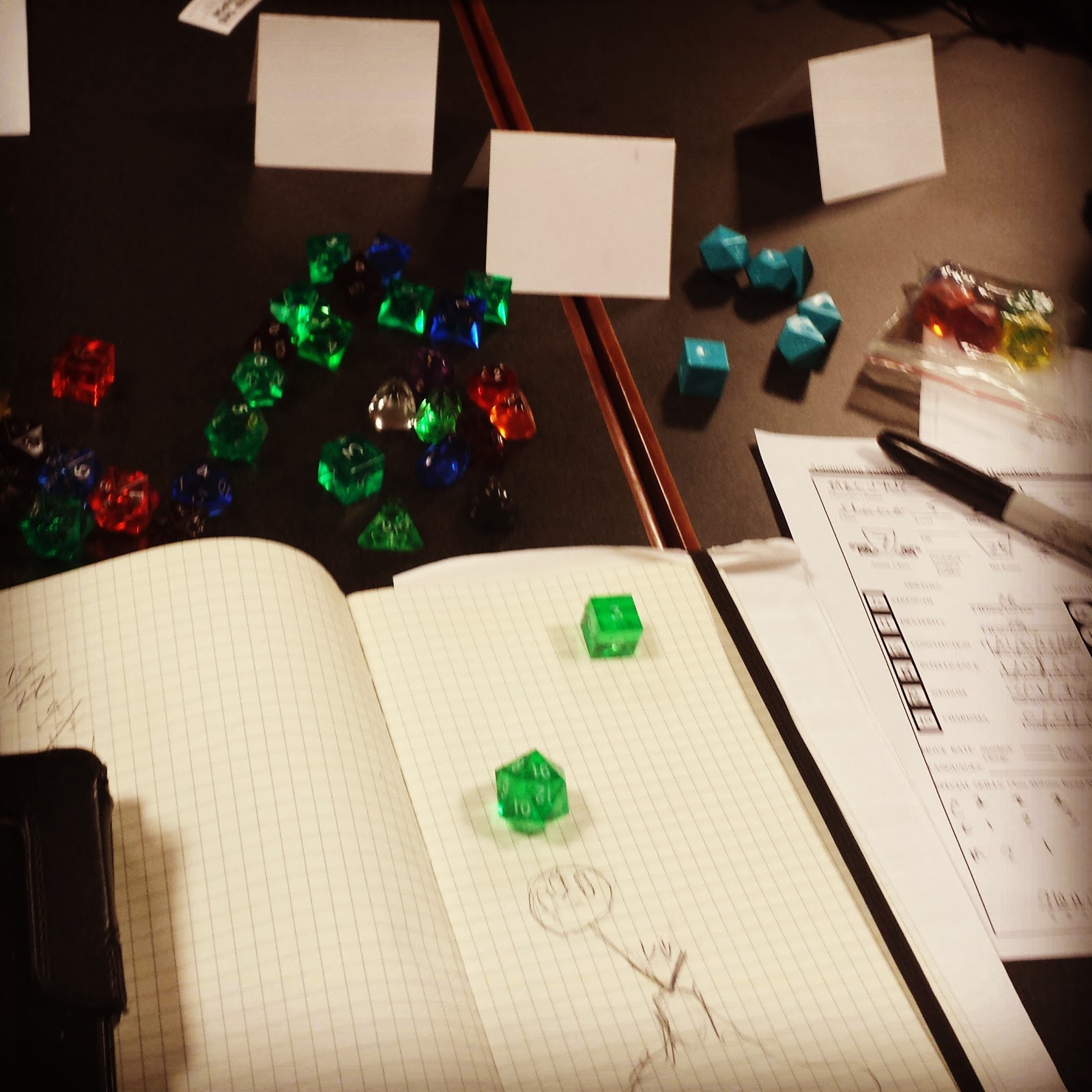 Andrew's ASSH session went great. He ran "Taken From Dunwich," which I'll admit that I own in pdf, but don't know well enough to have any spoilers up in my brain. I got to play an Esquimaux shaman -- in ASSH this is pretty much one of the coolest classes. They're sort of a multi-class cleric (or druid) and wizard (or necromancer) that gets some cool heal-y stuff and comes drenched in campaign flavor. Also at the table was Ryan Thompson's Ixian witch -- sexy male witch -- Layne Wood's Kimmerian ranger & Reece Al's Viking bard (skald?). We trudged into a mountain, executed a familiar-exploitative plan that we named "the weasel maneuver," and did a pretty great job of avoiding death. Also, we ended up with rayguns. Well, at least one raygun. Oh, and I got to cast Call Lightning on a giant of some sort. Call Lightning in ASSH is brutal if you can manage to cast it. Good session, great fun. 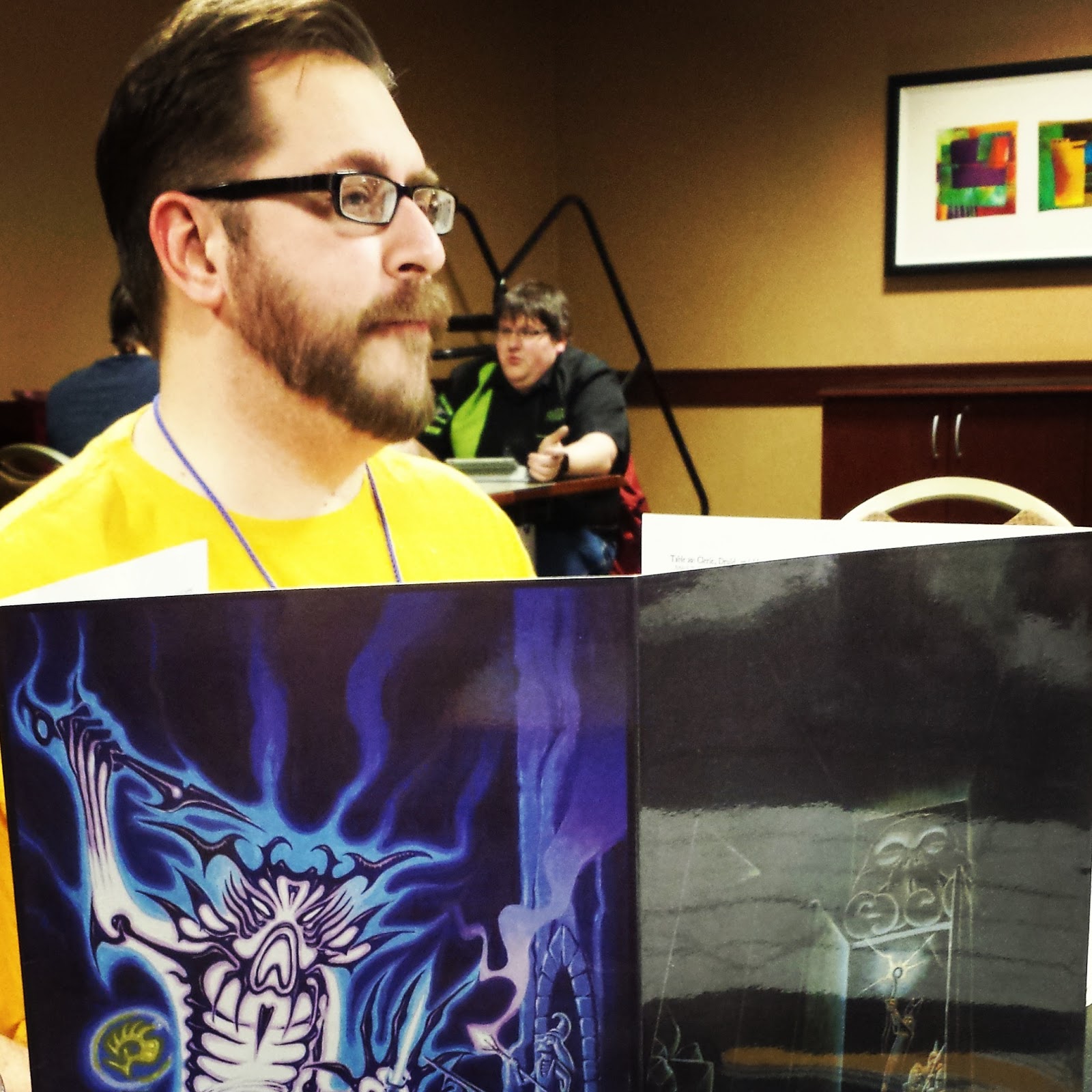 Next, we moved on to Ryan's Swords & Wizardry Complete game, which was also a playtest for a rules supplement he's working on that affords all sorts of extra options like fighting styles and spell retention and stuff like that. Ryan was running us through the old Judges Guild gem, Portals of Torsch, but we didn't end up getting very far, especially when Layne had to bow out early. This was the same crew of players from the previous session, plus a "very enthusiastic" young player of all of 13 years or so named Jonah. Being a young man of that age and that degree of inexperience and inexposure to gaming, Jonah played an elf wizard. There were a few times where the party had to suggest that he calm down and let the older players ask the questions, but it was good to see the young gent having a good time with old school gaming. Oh, and Portals of Torsch is super cool! I'm really going to need to look this thing up and have some fun with it. 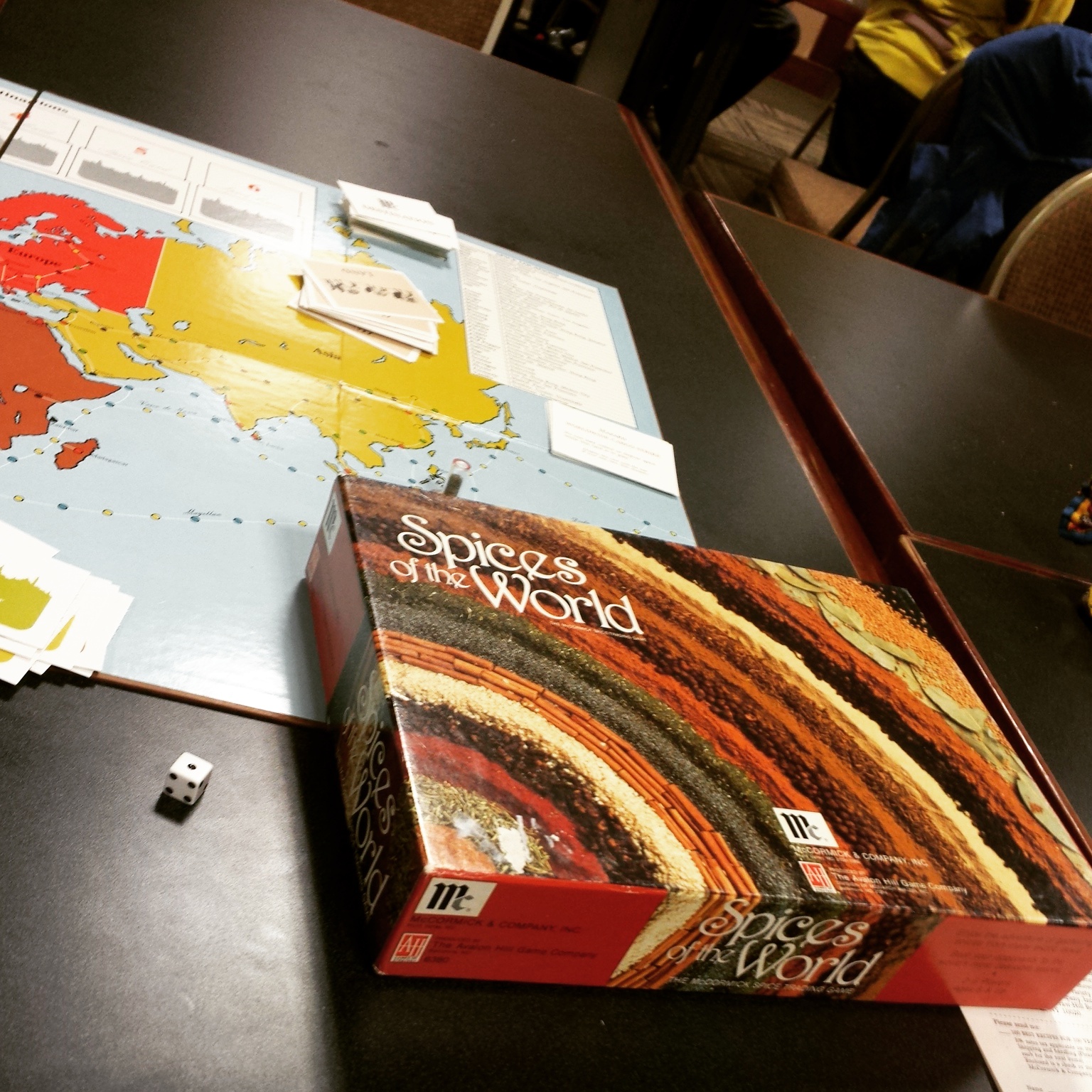 After Ryan's game fizzled out due to Layne and Reece needing to beat a tactical retreat due to the hour, Ryan broke out the copy of Spices of the World that he'd purchased earlier in the day. You might not believe this, but it's a joint effort between Avalon Hill and McCormick spices. No, seriously. It even has small amounts of real spice encased in plastic for the game's pawns! Each of the "spice" cards not only explains the spice, but also includes a recipe that uses it, straight out of the 80's! Add in some blissfully out-of-date names for foreign cities (we had to look up a few like "Hssi Chou") and you've got a recipe (ba-dum-dum) for that sort of awkward cross-branding that marked the board game market of the 70's & 80's. So, we played it. And you know what? Spices of the World really isn't a bad game at all. I don't know if it's one that I'd choose to pull off my shelf and break out at a party, but it's not a game I'd turn up my nose at.

We called the party off when we got kicked out of the room because the con HAD TO CLOSE at 11pm. I'm really looking forward to Marmalade Dog coming up in a few weeks. And then GaryCon in March. So far, I've got nothing in April. Any suggestions?
ASSH convention SnW