14 December
Many folks out there in the DIY gaming & OSR blogosphere are familiar with the concept of the Joesky Tax. It's the idea that if you post a lengthy diatribe about a conceptual topic in gaming where you're trying to make a particular argument, you need to include some gamable content before your post is over. If you write a screed but don't include anything gamable, your argument loses. Well, it's really more of a "loses face" sort of thing, but it's also a way for folks to willingly "make up" for readers indulging the blog author for expressing whatever it was. Not nearly enough people pay the Joesky Tax when they really ought to, and those are people whose blogs I read less and less. Or just delete from the Feedly entirely.

Well, I'd like to propose something similar: The Noah Tax. Here's where it comes from. 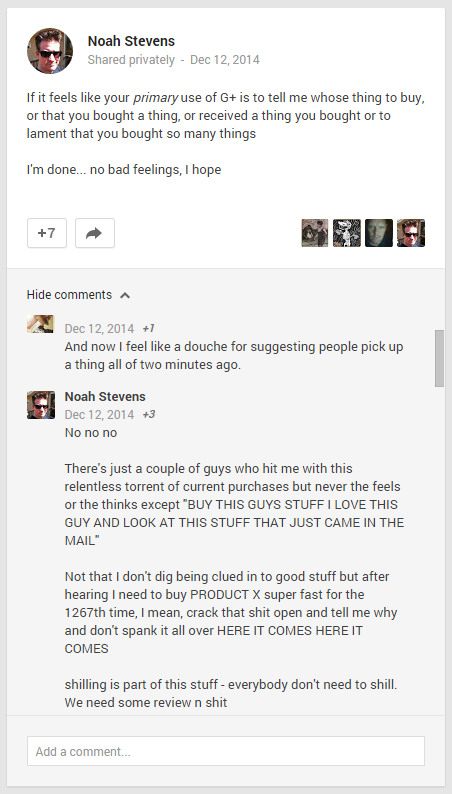 Pretty much directly after I made a G+ post about how I think people should support a particular writer and buy a thing he had done, +Noah Stevens posts this and makes me feel like an ass (that's me saying "And now I feel like a douche..."). Turns out, that's not what he was trying to do. This is the season where lots of geeks buy lots of cool stuff that they get really excited about and share with G+ how excited they are about their geek consumerism and OMG YOU MUST BUY NOW! And then, when they get the stuff in the mail, they take pictures and brag about how they got some thing in the mail and it's mine now and I own it ha ha ha look at me world!

I'm pretty sure I've been guilty of this sort of junk before, too. I clearly was in the case that made me feel like a douche.

I don't know why this got all darkened in the process of me screen-shotting it, but it did and we'll have to live with that. Now, here's what I did wrong with this post: (a) I asked other folks to buy this thing, (b) I bragged about just getting it in the mail and (c) I asked other folks to buy it without saying why they should as if just knowing that it exists should be enough for folks to want to own it. Bad form, Adam from last night, bad form.

And yet, from the bad form springs a great idea. 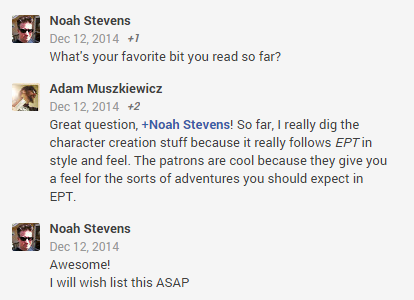 This exchange exemplifies to me what we really should be talking about when we talk about new products. In asking "What's your favorite bit you read so far?" Noah's really asking me, "Hey, exactly why do you think I should buy this thing?" A valid and remarkably insightful consumer-side question. You should know why you might be interested in buying a thing, any thing. My answer to his question took some thought and made me quantify what I actually liked, thereby thinking about the thing critically.

And so, I put this to you, dear readers and probable members of the broader gaming and G+ communities. I propose a Noah Tax, not unlike the Joesky Tax. Whenever you post about a thing that you've purchased or are going to purchase and you think the rest of us would be interested in purchasing it, too, let us know why. Tell us what you liked about it so that we can see if it's the sort of thing that we might like, too. I'm not calling for full-scale reviews, but rather short bits that tell us more about your experience with a thing than anything else, since that's what really matters. I think if we all do this, we'll all be much better-informed consumers of RPG products and that can't do anything but help the industry as far as I can see.

Joesky Tax For The Post About The Noah Tax: New Spell

So, in broaching the topic of a "Noah Tax," I make myself eligible to pay the Joesky Tax. Well, I'll own up. Unlike many of my countrymen, I'm not allergic to paying taxes. Here's a new spell for your wizards, sorcerers, magic-users, warlocks and whatnots.

If the target of this spell fails a saving throw vs. Spells, he must answer the next question asked him by the caster truthfully. The target must answer as fully as he is able (typically, the only limitation is language); i.e., he cannot lie by omission or partial truth. Similarly, the target is compelled to answer (he may not stay silent). The caster may ask one additional question at 8th level, another at 11th and one more at 14th.
G+ magic spells