13 October
Howdy folks and welcome to the Dispatches from Kickassistan special coverage of the Delving Deeper RPG. Imagine me saying that in my best news announcer voice. My news announcer voice is pretty good, too. Here's the deal: +Simon Bull, the guy who's really the driving force behind Delving Deeper, offered me a review copy of the new version four revision of the rules that are available in print from Lulu.com or, as always, as a free pdf from the Immersive Ink forums for the sake of, naturally, review. Simon made the mistake of saying that if I had any questions, he'd be happy to answer them. That turned into me (roughly) interviewing him for a few weeks. This post collects a few of those questions and answers, as will several of my next few posts.

Before we go any further, I do want it to be recognized that (a) this is a game I currently play and enjoy. (B) I was given a review copy of the POD version of the rules (thanks again, Simon!). And (C) the primary reason I agreed to do this is to give a little love to OD&D-style gaming, Delving Deeper and the creator of a game that I really, really enjoy.

[My questions are in bold, Simon's responses are indented.] 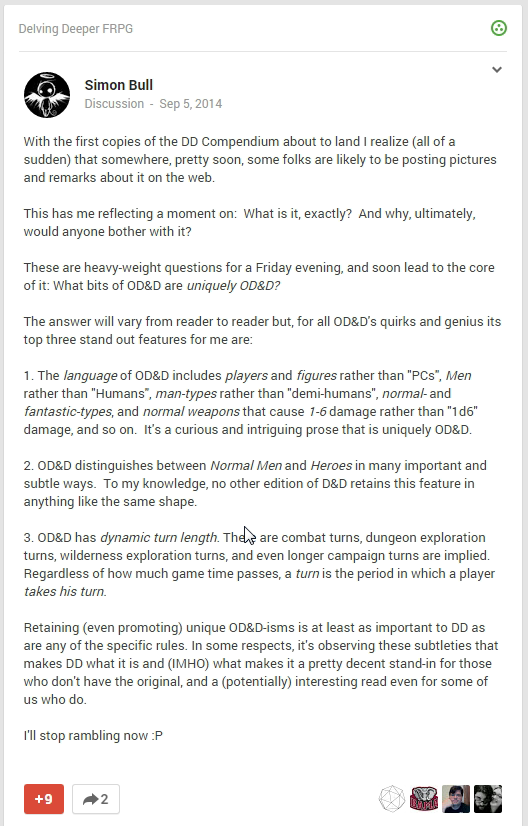 The key motivation for DD was originally, I believe, as a legal 0e publishing platform for BHP. While BHP is no longer driving it, this central motivation still remains.

Of the other 0e emulations that were "out there" at the time of DD's inception:
. S&W was seen as covering 3LBBs+Supplements,
. S&W whitebox was seen as covering volumes one and two of the 3LBBs,
. The single volume OD&D PDF was of course illegal so couldn't serve as a legal publishing platform.
. Torch and Sword also appeared around mid 2011, and probably (in my view) ticked most of the boxes very neatly--except that by that time the DD project was already "in flight."

Imagine for a moment that I'm not already positively predisposed toward OD&D gaming. How would you, the person most intimately familiar with the game, convince me to try Delving Deeper?

Part A is frequently debated in the gaming community. "Why would anyone bother with those antiquated, 0e-style games?" Here are some thoughts...

* 0e games are accessible. There are few rules a new player needs to know, so even a novice can get involved and have a character in game in a few minutes. And for the experienced guys, all they need for decades of gaming is in three little brown booklets (or if you don't have them, then the one DD booklet will do). It's a whole different level of accessibility compared to, say, the one thousand pages of core rules you get with 5e.

* 0e rules tend to be pretty coarse-grained and don't have lots of modifiers. This makes the mechanics easy to memorise and fast to run. For all the myriad subtleties of "more advanced" rules, they are rarely better simulations and frequently more cumbersome to use.

* 0e games tend to be pitched at just the right level of abstraction to enable a game spanning dungeon, town, and wilderness exploration, and one-on-one duels to battles involving scores (or even hundreds!) of belligerents.

* 0e games are fast paced. Combats run briskly; even major fights that can take hours in other systems can be all over in just minutes. You can get a whole lot done in a typical 0e game session.

* OD&D is deadly (as are 0e games in general) in a way that few other RPGs are. Challenges and rewards are not scaled to be "appropriate." The game can be deadly, but so too the rewards can be tantalizing. Deadly risk plus the possibility of Very Real Reward is a pretty good recipe.

* OD&D is ultimately a rules framework rather than an exhaustively complete and polished system of game rules. It's the toolkit rather than whatever you might build with the toolkit. It can be used "as is," or built on, or adapted into just about anything you want it to be. OD&D is a RPG tinkerer's dream; so much can be done with it so easily!

So what then does DD, specifically, have to offer?

Given that scenario, DD is one of a number of 0e-style games "out there." So why choose DD?

Probably most importantly (and in contrast to the original) DD is current and available. It's easy to find and price is no barrier to entry--the reference rules and hypertext editions are free, and even the POD soft copy is dirt cheap. So there's really nothing stopping anyone from checking out what all the 0e "fuss" is about.

That aside DD is, to my knowledge, at least as representative of the original material as is any other 0e game. I would say "more so" but of course I'm biased ;) Even allowing for bias, it's my view that DD stands alone among the 0e-style games in terms of its faithfulness to the language and unique features of the original game. If you haven't played the original game, I'd say DD is a pretty good representation of it.

DD is also a "reasonably" mature product in micro publishing terms. There have now been four versions of the DD Reference Rules with each version being tighter and "better" than the last. Quality-wise (in terms of writing, editing, production, attention to detail) I reckon DD is as good as anything else out there--certainly in the "freeware" space.

So, if you're curious about Original D&D but don't have $200 for a collector's white box set, why wouldn't you check out DD for free?