30 September
Last time, we talked about the two 2e era settings that got me really excited by allowing all PCs to mess around with stuff that had been reserved for higher-level characters (namely, planar travel and domain management), but that pushed me away with some poor choices in design. Before that, we discussed two 2e-era settings that promised awesome heights of genre specialization, but wimped out by an over-application of what I call "post-genre D&D" and the tropes of D&D in general. Today, unfortunately, the only thing these settings have in common is that fact that I never ran any of them.

I'm at a weird place today when I discuss Ravenloft because I think what we wanted Ravenloft to be when I was coming up is what +Scott Mathis's Transylvanian Adventures is: a rollicking, Hammer Horror-inspired ass-kicking vampire stake-fest. Well, you know what I mean. The thing is, we've all been exposed to the horror tropes so many times over and over through the past decades, nay, centuries, that when TSR announced that it was taking its unreasonably-popular I6: Castle Ravenloft module and expanding it into a full-blown setting, we should have known it wasn't going to do what it claimed on the box. How many vampires, wolf-men, Frankensteins and mummies can we possibly see rehashed and believe that a gaming company who was making its money by playing it safe (at the time) and not innovating was likely to bring something new and interesting to horror gaming?

[I'll clear this up right now by saying that I believe that, yes, it is possible to innovate in horror gaming, even when using traditional horror tropes. It's just really freaking hard. Much harder than TSR was capable of back in the late 80's & early 90's.]

That having been said, Ravenloft the setting managed a few things that I enjoyed. From a certain point of view, Ravenloft is a sort of prison where the prisoners are the "big bad evil guys" of various campaigns (or horror tropes) and the prisons are shaped to fit their particular idioms. Sure, Count Strahd gets to run rampant over the hills of Barovia, but he's trapped there. Completely unlike Camus's Myth of Sisyphus, we have to assume that this does not make Strahd happy. The revoltingly-poor novels written about Strahd (thanks to +Jack Shear, I'll never have to read another one; here's the link) constantly place him at odds with his imprisonment, focus on his attempts at escape or self-satisfaction, and even touch on his attempts to become one of Ravenloft's "Dark Powers."

Sure, that sounds kind of cool. Or, nearly so. It has its toe dipping into "No Exit" waters, which I should be happy about, but the whole concept of this particular prison introduces an unfortunate moralistic dimension: there are people trapped in the domains of dread with the big bad evil guys. Because we as players (or DMs) tend to think of these poor saps as "innocent bystanders" (or at least that they have the potential to be innocent bystanders, even if they're jerks), and because of the very existence of big bad evil guys in the same inescapable locations as the bystanders, we're forceably shoehorned into that classic 2e-era trope of having to be to good guys. The monster hunters. The saviors of the village. The VanHelsings or, if you prefer, VanRichtens.

This setting might have been interesting if it focused on (and thereby rewarded) the sort of stories that make sense in the dark domains. I'd vast prefer playing both sides -- which are probably a werewolf and a hag -- against the middle to get the vampire slain. Don't burn down Castle Frankenstein, you blackmail the Baron into giving you the alchemical/arcane knowledge you need to make your escape from Ravenloft. Why settle for the lesser evil, especially when that way lies eternal imprisonment in the domains of dread? That's what I want to see out of Ravenloft, but we were given the same treatment that TSR gave everything back then and that was especially reinforced by Hammer horror. Not scary, not interesting, nor fun. 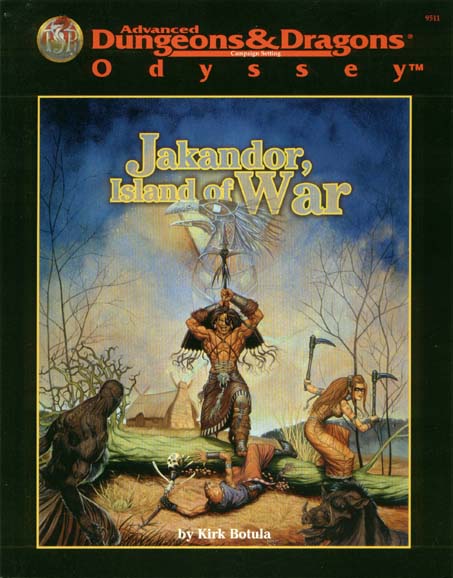 The next setting I want to talk about wasn't technically a TSR setting, but rather was a WotC-era 2e setting that came out near the end of 2e's run (1998). The idea behind Jakandor was that two cultures inhabited the island of Jakandor: the savage, magic-hating, barbaric Knorr (which felt like a cross between Native Americans and Vikings, which is pretty cool) and the decadent, civilized, magic-using Charonti (which, again to me, felt like they fit somewhere between the Aztec and the Sumerians which, again, I think is awesome). The Knorr were newcomers to Jakandor and inhabited its eastern side while the Charonti were the native culture and dominated the west. Knowing that players tend to identify strongly with whatever side of a game-related conflict they encounter first, WotC very carefully released both the Charonti & Knorr books at the same time, ensuring that the choice of faction really amounted to player choice and not exposure bias. Further, neither side was painted as "the good guys;" both had features that weren't objectively good and others that weren't objectively evil. Set all that in a far more swords & sorcery background than high fantasy and it starts to sound like the sort of thing I should really be sold on, doesn't it?

You, dear reader, I'm sure are keenly aware of the "except" or "but" or other interjection that looms large before whatever I say next. At this point, I think we know each other well enough to take it as read, don't we?

So here's my problem: the faction books for this setting spend way too much time demonstrating that their side is the good side. And not by showing you how evil the other side is, either (remember, this was written in the 90's and bipartisanship still had a chance in the US back then), but by showing you remarkably dull and utterly banal the factions are. I expected to love the Charonti, particularly with their CA Smith-style embrace of Necromancy as a solution to their society's woes. I was hoping for a twisted form of Nietzschean nihilism writ large across society and instead was given a zombified Rosie the Riveter and a "we can do it!" speech. The Knorr were kind of haughty at least, and self-righteous in most of the right places, but all in all this setting was too kindly and, frankly, not nearly brutal enough. Add to this extensive support of WotC's "2.5e" supplements and reliance on more kits and proficiencies than are healthy and you've turned an exciting Skraeling/Vikings vs. Aztec/Sumerians cross-cultural, morally-void slugfest into an option-clogged round of one-upsmanship, each faction one-upping the other on the ladder of tedious self-affirmation. It's not really a wonder that Jakandor never received more than 3 books, nor that WotC, after killing the setting, released those three for free on their website at the turn of the edition.

Whew. Well, thanks for joining me for another slog through the settings of yester-edition. I'm only planning on one more of these, then we'll start looking at what I would do with them. Next up is the setting so good, TSR had to steal it from itself: Mystara & the Hollow World.
2e Dungeon Mastering TSR