28 September
Last time, I picked apart Dark Sun and Spelljammer and how they ultimately fell short of their particular brands of promise. I felt odd writing the "promise" so many times, but really, that's what I felt that Dark Sun and Spelljammer had in common: they fell short of the promises they'd made. Today's settings share something in common as well: they're settings that drew me in with a central feature, but then pushed me away with another.

I will admit to a previous career as a power gamer. Thankfully, this was back in my youth, but I'm afraid I would have been the type of gamer who used the Deities & Demigods as a Monster Manual had I been born about 8 years prior, so it's a good thing I wasn't. I became fascinated with things like the Manual of the Planes and the biggest bad guys that Uncle Gary & crew could come up with and figuring out how to involve my PCs with them, only to find them chronically underpowered to do so, and the whole thing would end in a stupid exercise in futility and practice at rolling up new characters or in an even worse, ridiculous contrivance that saved the players' collective bacon while making little to no sense, all played off as part of some "grand scheme" that players might never understand or see evidence of again because I was 15 or 16 and stupid.

And so, Planescape seemed like a great idea to me. Planar travel was right up my alley, as well as allowing players to muck up the schemes of transcosmic badasses at level one. Never before had there been much ability to screw around on the Outer or Inner Planes at that low of a level, and I was excited about the opportunity for a departure from the traditional AD&D fare. At the time, games with more of a focus on role playing and gaming-up social interaction (games like Vampire) were taking off; even back then I recognized that rules for social interaction weren't exactly necessary, particularly when players have enough agency to make decisions about how their own PCs behave (which should be always). The idea of standing against the agents of Demogorgon and Orcus, much less the schemes of lesser extraplanar beings, from the lowest of levels with their wits as the players' chief weapon appealed to the tiny sliver of story gamer in me, as well as that swiftly-dying ember of a power gamer.

My core disappointment with Planescape, however, comes from the fact that it never felt like it adequately rewarded the activity that the players were expected to undertake. Though I didn't know it at the time, I seem to always have had a working concept that games reward experience for the sorts of behavior they want to encourage. Classic editions of D&D reward experience for defeating monsters and collecting loot, but that's not the sort of thing that Planescape deals with. Sure, there are guidelines in the Planescape setting box for awarding XP for non-combat activities, but they rarely seems as rewarding as "traditional" D&D murderhoboism. And so, the focus of Planescape games always seemed to drift away from what they felt like they should be about and more and more toward the standard D&D "beat up the bad guys and take their stuff" tack that I had already gotten bored of. Obviously, this could have been made to work for me back then, but there wasn't as much of a point in that for me; instead, I just moved on to something else and spent many years enjoying WEG d6 Star Wars and getting stuck with the World of Darkness.

It's going to be very hard to write about Birthright without using the word "promise" again, but I'll try. I always wanted to get a character to "name level" (despite the fact that most games I played didn't have "name level" anymore) so I could build my keep, rule my barony and build a kingdom. I always want to do new stuff in gaming, especially things I've never had the chance to do. As a result, the Domain Game idea always appealed to me if only because I've still never gotten to play it. Birthright opened up the idea of the Domain Game to all players (rather than just the ones who could have a character survive to level 9) by detaching rulership from level and instead attaching it to campaign elements. Add to this a very streamlined Domain Game with a built in mass combat engine that didn't threaten to get bogged down with too much fiddling with troops and you've got a winner! (It might have helped that I was a huge RISK player at the time and had just gotten into Axis & Allies as well.) 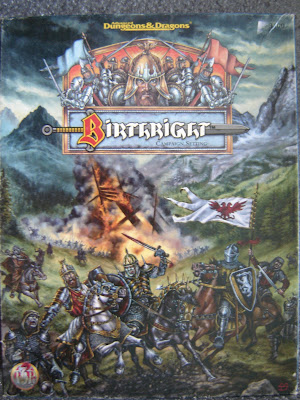 Well, almost a winner. The problem with Birthright was not the rules (well, parts of the rules; the Domain Game was solid, but the whole "you've got the blood of a dead god in you" system was wonky and felt like a backhanded attempt to make psionic wild talents work in the campaign by giving them a different coat of paint), but the incredibly lame, boring setting they were given, full of terrible and hackneyed D&D and Anglocentric tropes. Instead of nations arraying themselves against each other in vainglorious struggle for supremacy, the by-then-old-hat themes of "these are the good guys, these are the bad guys" reared its head yet again (in many ways, this is the defining characteristic of the 2e days and why I think it's too tepid or "vanilla"). It was obvious who was good and who was bad, who your PC-king should ally with and who he should war against if only because the book told you their alignment. Add in the vaguely-Tolkeinian lineage of horrific nightmare beasts that no one could spell (seriously, I get that you're going for a Celtic flavor but Celtocentrism is really just another shade of Anglocentrism, a cardinal sin as far as I'm concerned) and your "ooooh, Domain Game... this could be interesting" becomes a "good guys vs. bad guys" playground-style snoozefest.

Curiously, I think that Birthright might have been a much more interesting game (and Cerilia a much more interesting setting) had it been used for BECMI D&D (by then RC D&D), if only because the lack of a "good and evil" axis to alignment would have added a lot of depth, uneasy alliances and a great deal more of a moral gray area to the game. That might even have made the setting more palatable: if the good guys and bad guys were less clear-cut or, even better, didn't exist as a distinction at all, Birthright would have been a much more interesting setting. For a setting that vaguely emulated Europe (or really, Europe-ness), does it make sense for there to even be clear-cut heroes & villains other than from a nationalistic stand point? You'd really have to have some history-blinders on to be able to answer that question in the affirmative. And so, I have to consign Birthright as written to the dustbin of good ideas that could have been but that smothered themselves beneath their own weight.

Man, writing these feels really negative; I assure you that's not the intent. If anything, I love these systems and settings and wish a few things had been done differently to rescue them from their design faults. The fascinating thing about these two settings is that both offer typically higher-level activities (planar travel, running a domain) to low-level characters and, in this, I'd say they're to be commended. It's when those settings fail to follow through on what they'd need to thrive (often by watering-down contentious -- thereby awesome -- elements) that the settings lose their luster.

Think I'm done? Not quite! Next time, I'll tackle two settings that are heavy on moral relativism with both Ravenloft and Jakandor.
2e BECMI Dungeon Mastering TSR