06 July
It's been a few days since the free 5e Basic rules hit the proverbial streets and, while we've not had a full-blown edition war yet, it's been really tough to dodge the "we want to have something to argue about so we'll argue about anything we can find" crowd, which is largely why I've been lying low around here. I don't have a horse in that race, but I'd like to add that, particularly in this day of the internet echochamber, inclusion needs to mean including people you don't agree with. Period. 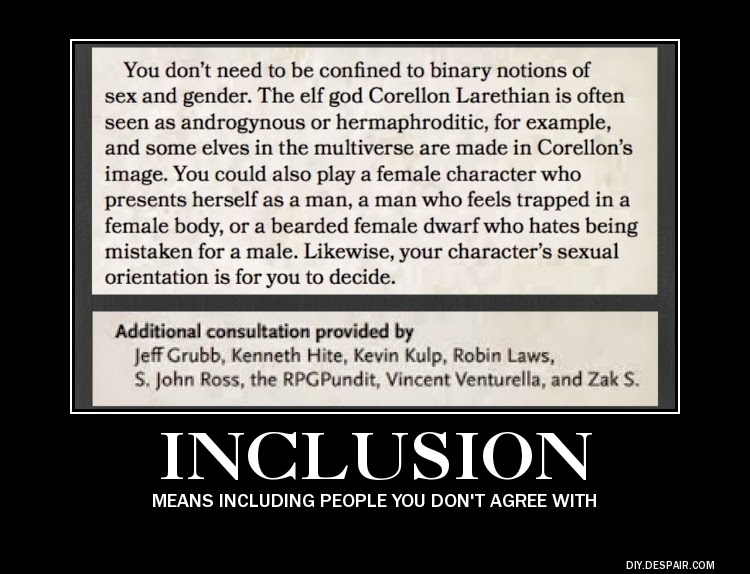 So, let's take a step away from controversy because that's not why any of us are here. I'm sure that some folks are somewhere because of controversy, but it ain't here. Let's move on, shall we?

On Saturday, I had the opportunity to attend an "unboxing" event hosting by +R.J. Thompson of Gamers & Grognards. This was originally going to be just a Ryan jam, but I ended up jumping in (repeatedly) with my (opinionated) observations. I'm not going to list them all here (I want you to have as many reasons as you can have to watch Ryan's video), but I do want to talk about some ways that I've been working through to old school-up your 5e game.

These ideas largely build on the concept that old school is less a rule set and more an approach to gaming and, as such, can be just at home in 5e as in 1e. Or BX. Or whatever. Rulings, as Mr. +Matt Finch always likes to say, not rules

Every few months, someone trots out the "self-justifying thief" argument as if it's something new that no one's ever thought about before. You know, the one that goes "if thieves didn't exist, then thief skills wouldn't exist, and any character could do those things without needing a thief to do it." This is not a bad argument. It's just old. People aren't going to stop introducing skill systems into games just because the White Box neither had nor needed either. These days, modern gaming is more of the "roll you skill, see what happens" variety rather than the "I narrate exactly what I do" school.

Old schoolers will naturally go in for narrating how their characters do a thing. I don't want to say that this method is objectively better, but it's definitely more old school and what I prefer. I often have my players tell me how their characters do a thing. Usually this nets them an automatic success (or failure) depending on what they do. In more modern systems, it seems to be common practice to just roll some dice, and let the dice tell you what's happening. If I tell the DM "I look under the bed" and he tells me to "make a Spot check" and I miss the thing hanging out under the bed despite the fact that I explicitly said that I was looking there, that's utter bullshit. There's no reason why the narrated action can't lead to automatic success as much in 5e as it did in 0e, just like it can lead to automatic failure. At very least, action narration can create advantage or disadvantage. The median path of dis/advantage should be a good incentive to get folks who are used to just rolling rather than role playing enough encouragement to get playing in a more old school fashion.

This one is technically monkeying with the rules, significantly more so than the last since it's a little more than just a ruling. In-dungeon, out-of-combat time in the RAW is kept in minutes. I'm not sure why. Yes, it's slightly more accurate than measuring things in ten minute turns, but there's no real reason to stick with it. The text suggests that it "takes... about a minute to creep down a long hallway..." and "...another minute to check for traps...", but that seems a bit too fast for my sensibilities. Instead of one minute turns, there's no reason a DM shouldn't house rule back in ten minute turns. Of course, you could just rule that all of these tasks just take ten minutes, which I guess doesn't make it much different. There's all of one sentence that I can find in the Basic rules that discusses what happens if you're hit while casting a spell (and it's on page 79 under "Longer Casting Times"), where it's said that "[i]f your concentration is broken, the spell fails, but you don't expend a spell slot." Yet, this doesn't seem to be quite possible in the RAW because of one key missing component of old school gaming: declaration of actions.

Systems like ACKS require that in order to cast a spell, a caster must announce before initiative has been rolled that they are doing so (this is also applied to defensive actions like withdrawing).  I'd add this extra step of "declaration of intent" to the turn order, accounting for stuff like this, particularly stuff the success of which depends on when other things happen. If a wizard can fail at casting Sleep because he got hit by a stray arrow or a goblin's shiv, then the rest of the group will probably cover him a little bit better, fight together and use something resembling tactics. The oft-overlooked corollary of this rule is that if the players get to go before the evil sorcerer busy casting Golharrad's hoary doom on them, they might be able to save their asses with just one well-placed attack or spell, what's good for the goose being, as it is, good as well for the gander.

I'm sure there are tons more ways that a DM can old school-ify 5e, and that's the stuff off the top of my head. What about you? How would you tweak 5e Basic to make it play in more of an old school fashion?
0e 1e 5e BX Dungeon Mastering