23 June
When Free RPG Day started circling around in my brain as a thing I should get involved in this year, I started checking with some of the local game stores to see if they participate. No one in my immediate vicinity (that I'm aware of) thinks that Free RPG Day is a good enough deal to get involved in. In fact, more than a few proprietors voiced their opinion that "all it does is bring in people who want something for free, not paying customers." Do you do anything special for the day? Run games in store? "No, why should we do that?" Do you advertise for Free RPG Day, put up flyers or anything? Maybe offer a coupon or loyalty program? "Oh god no, that's crazy, we're already out money on Free RPG Day, why would we make it worse?" Do you do any promotion of the event at all that would bring paying customers into your store? If your answer is "no" here, proprietor, maybe you need to seek a new line of work. 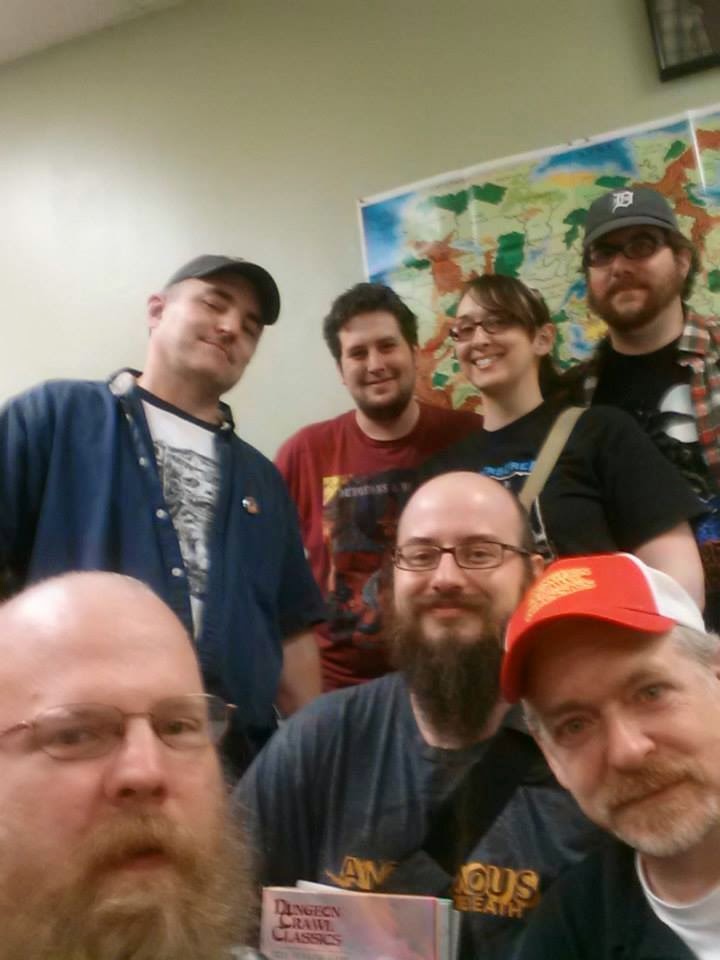 Free RPG Day is, in my estimation, the one day of the year where every game store gets to participate in a sort of nation wide convention. People will always show up for free stuff. The point is to get them to stay, play some games. The longer they stay in your store, the more likely they are to spend money or to come back and spend money later. It's an opportunity for the enterprising game store owner to not just create customers, but to create fanatics. Any old schlub can clerk a sale, ring up a pack of Magic cards or sell the latest Mathfinder splat book. A good game store owner is a real entrepreneur who can turn a casual customer (or even a freebie-seeker) into a repeat customer and a hobbyist into a dedicated gamer. +Todd Bunn is one such game store owner.

Todd was the first retailer to shelve the Metal Gods zine and he gets routine mentions on the Spellburn! podcast due to his devotion to DCC and all things old school. I met Todd at GaryCon this year and, somewhere along the line, he invited me down to Cinci to run DCC at his shop. When I discovered how lame all the retailers near me were, I asked him if he could save me a table.

+Kathryn Muszkiewicz & I had originally planned on heading down Friday night so we could be there on Friday morning when the shop opened up, but that would have put us getting into Cinci at about midnight or so. Instead, we got up early and made the four hour drive first thing in the morning. We got to the store just in time to miss getting into +Rick Hull's session of the DCC Free RPG day module, but that was cool. I hate to take a seat from a new player; I'd far rather that more people get to learn and love DCC than if I get in one more game. Rick seemed to have a full table, which is always good to see. 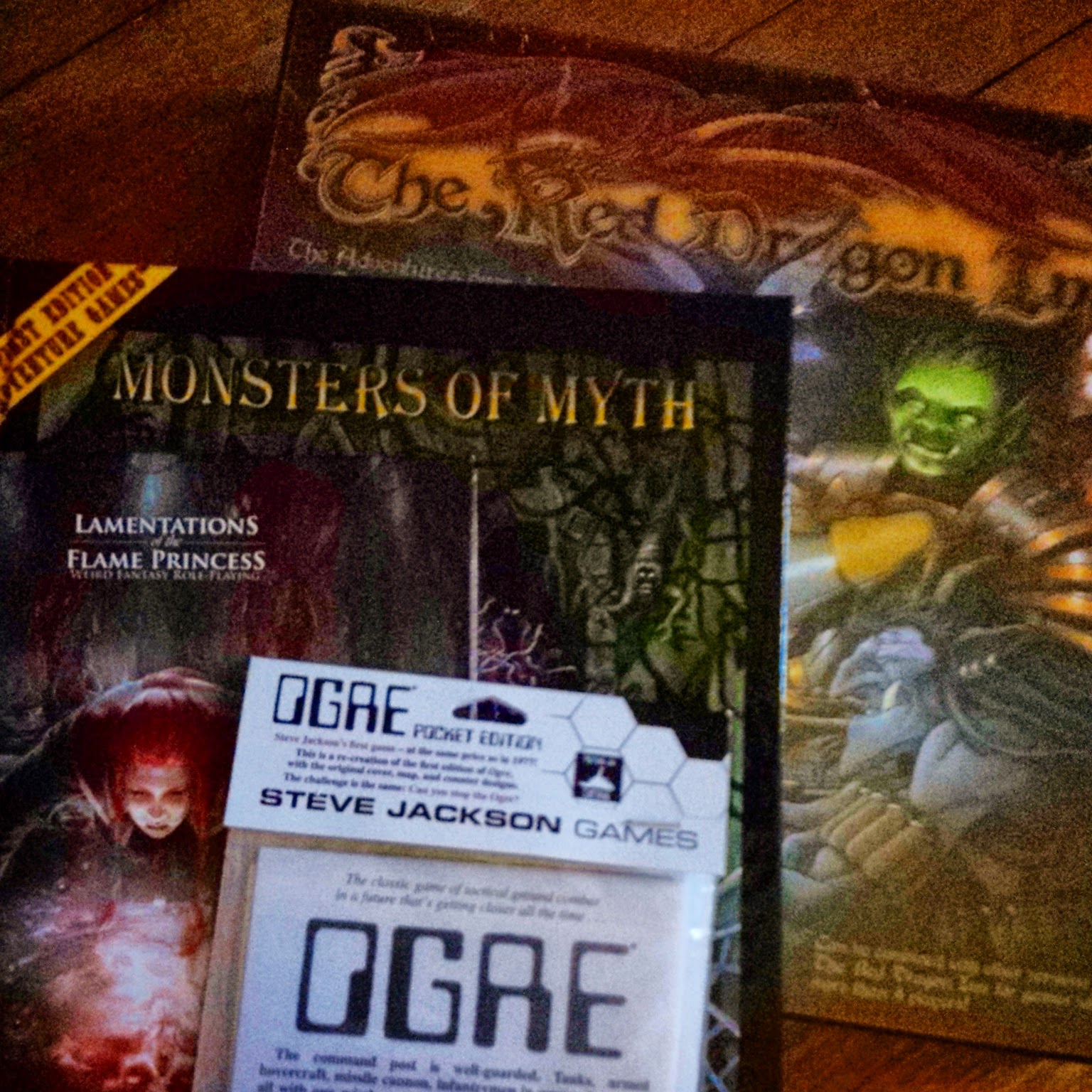 Katie & I already knew that we were probably going to drop a dime or two at Gateway; it's one of those things, if a game store gives enough of a shit about its customers to participate in Free RPG Day, its customers should give enough of a shit back that they take the time to actually purchase something there on the day. We looked at this as our pre-GenCon game splurge and came away with a few things we'd wanted for awhile. We picked up a copy of Red Dragon Inn 3 (in an interesting move, it's actually a full game, not an expansion; I also happen to know a guy who did some of the art for this one), the LotFP Rules & Magic hardcover (which I for some reason hadn't owned yet), Michael Curtis's the Croaking Fane, and Black Blade's Monsters of Myth (it dawns on me that I haven't done a Monster (Book) Monday on that one yet, but this baby's all Katie's, anyway). Todd had a little surprise for me in a copy of the re-release of SJG's pocket-sized OGRE game, which he got his mitts on only because of a regular who had been to Origins a few weeks before. So I felt like I won the bonus round! 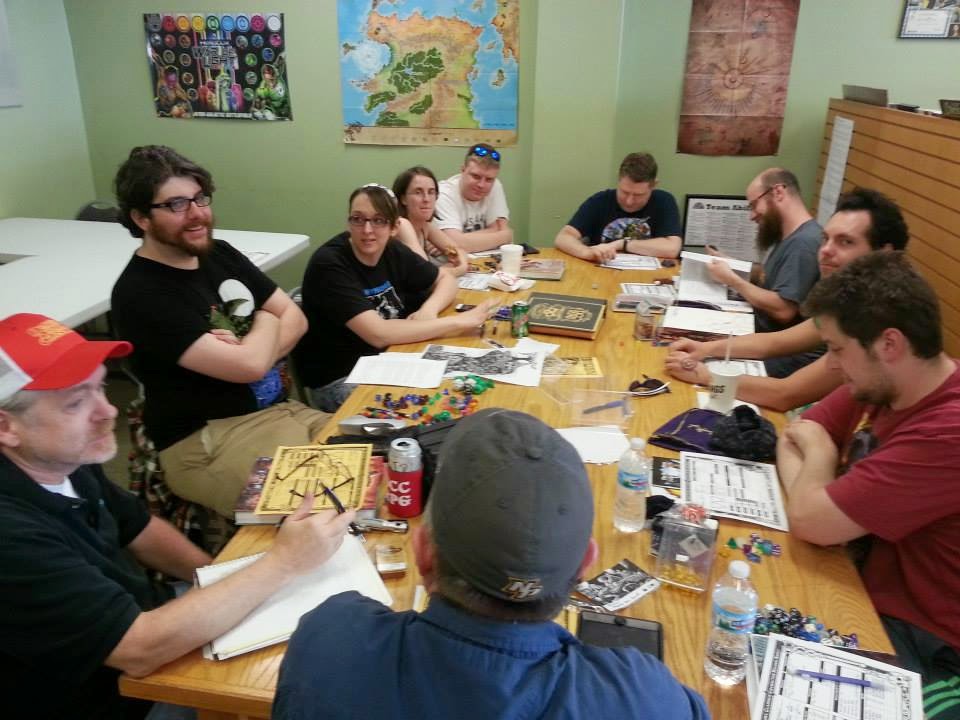 I ended up with a very full table, including Todd, Katie, Rick, +James Smith, +Jim Wampler and plenty others who I don't have in my circles (but Tim, Niki, Bobby, Beau & Marcos, you know who you are!). The scenario I ran is something that I initially wrote for the Metal Gods crew but that I'm tightening up into something that could be released some day, so I took the opportunity to playtest stuff. And so, 10 adventurers set off on a quest to eradicate a tribe of ape men that had taken up residence in a long-forgotten jungle temple. Along the way, two got to use my hallucinogen rules ("What Happens When I Eat This Space Tentacle?"), one reached a higher state of consciousness and the party devised two ingenious ways of bluffing their way past the ape man guards at the temple steps (two!). Inside the temple, we experienced some Donkey Kong-ery, the party elf did the one thing that an elf shouldn't do in the world of Ore, Todd realized that his wizard was really born to be a warrior and the ideas -- both good and bad -- flowed from the group like water. In the end, both despite my best efforts and quite to my surprise, no one died. While I might not have left a fatal mark upon the party, they definitely left their mark upon the world of Ore. In fact, thanks to Todd's wizardry, it's now winter on Ore... and will be for the next two game years. 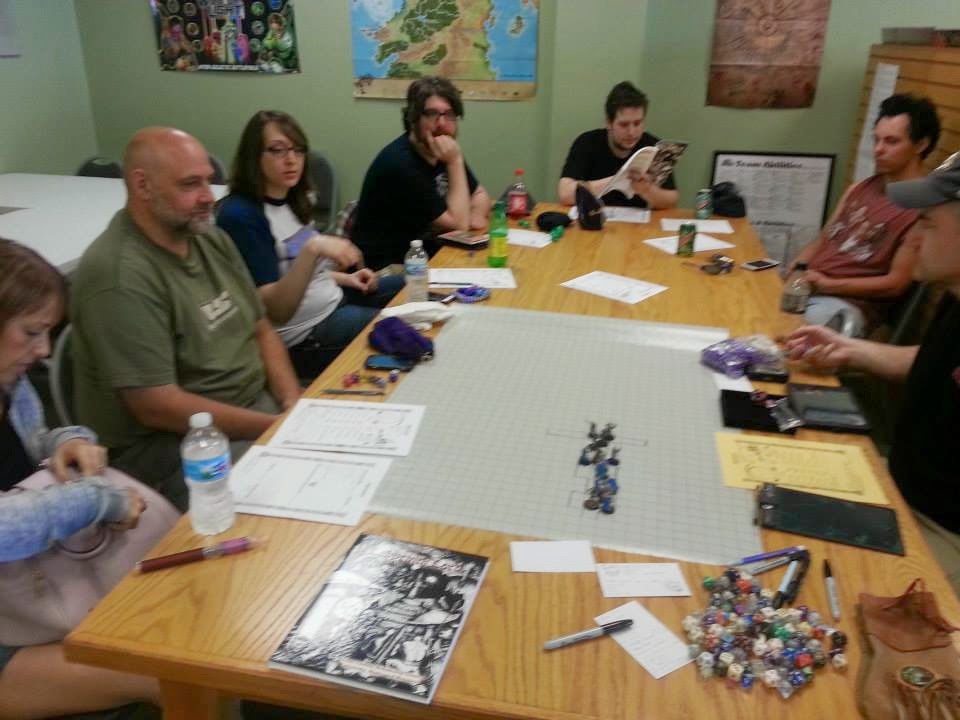 On Sunday, we had breakfast with Jim and then went back to Gateway by way of Jungle Jim's (a huge supermarket that's basically every specialty & ethnic grocery I've ever been to in a vaguely amusement park-style atmosphere; we just picked up some lychees because motherfuckin' lychees!) where the esteemed Mr. Wampler interviewed me briefly for an upcoming episode of Spellburn (how do I merit an interview?) and we joined in on Todd's weekly Labyrinth Lord game. And here's where I lose all OSR cred: I've never played LL before. In fact, I can't remember the last time I played BX or even BECMI. It was Katie's first time with LL/BX style gaming, as well, and it even ended in a TPK (well, probably), so she had the full OSR experience!

All in all, this was an awesome weekend of gaming for us. Todd does an amazing job of throwing one hell of a "convention in a day" for Free RPG Day; his formula is one that every store across the country should crib from. People of Cincinnati, you have an absolute treasure here! Celebrate this place! Leaving was really tough for us; kind of like those family holidays where it takes you an hour just to say goodbye to a few people. These guys really did make us fee l not just welcome, but like family.
convention DCC Labyrinth Lord LotFP Metal Gods of Ur-Hadad