09 June
This post could just as easily have been a "Tale Of Crowdsourcing Triumph," but I just did one of those and it's been a long time since the last Monster (Book) Monday. While the name of this one is the nice and short Bizarre Monsters Volume 1, the cover claims it to be "A Rusty Dagger Supplement - Bestiary of Fantastic Creatures - Playable with Paper and Pencil and Miniature Figures." With a "subtitle" like that, it would be a natural thing to assume that Mr. Sorrow's Bizarre Monsters was a straight up OD&D joint, but the stats in this thing seem more 1e than 0e, but that's not such a bad thing now is it? Here's the poop: 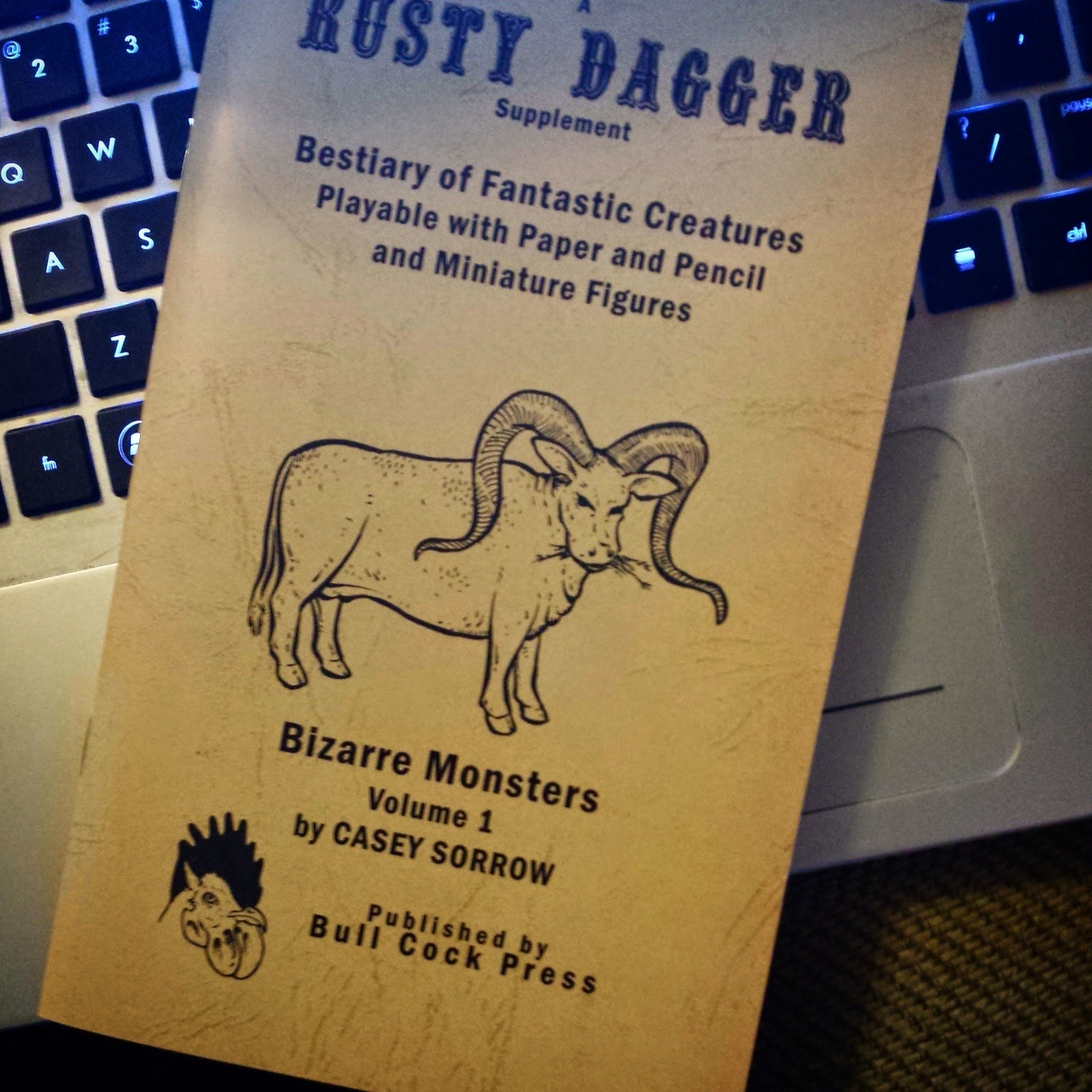 Bizarre Monsters V1 is the brainchild of Casey Sorrow, an illustrator and fellow Michigander, took this puppy to Kickstarter to produce an LBB-sized little volume of strange monsters. I'm sure that it'll look great in your OD&D box or with your rpg zines, because really, this thing is more or less a zine. Most non-rpg zines focus heavily on the art, and Mr. Sorrow has done that quite well here; every monster is drawn in loving detail, sometimes with multiple illustrations. Casey has imagined a scant 15 creatures here, but what they lack in number, they make up for in raw strangeness and attention to detail.

Bizarre Monsters is printed in what I've learned to call half letter size - most folks (including me at one point) erroneously call it "digest size" (digest size is actually 6"x9" not the 5.5"x8.5" of half letter) - with 36 interior pages printed on heavyweight off white paper. The cover is a thick, glossy card stock with a leather-like pattern on the outside. Every two-page spread features at least one illustration, most of which are monotone, but some use a gray halftone to provide depths (not sure what you call that).

I'll readily admit that I supported this project sight unseen because it was (a) local(ish) and (b) a zine (we RPG zine guys need to stick together). Sure, the art looked pretty awesome, too. What I didn't know back then was that Casey Sorrow has his head screwed on just right. Each monster here was designed to fill a niche, which is how I like 'em. Rather than just the "lets come up with a bunch of monsters that could fit in anywhere in the world," Mr. Sorrow designed monsters to fit specific roles. Like the Pohke (or "Exploding Cows"). You are not going to replace all of the general cattle in your world with Exploding Cows. You're going to use Exploding Cows so that your players have an Exploding Cow experience, and then you're going to move on, maybe keeping Exploding Cows in a particular part of the wilderness so that your players know that "here be Exploding Cows." That, to me, is the whole point in using Exploding Cows in the first place. Because it's awesome. 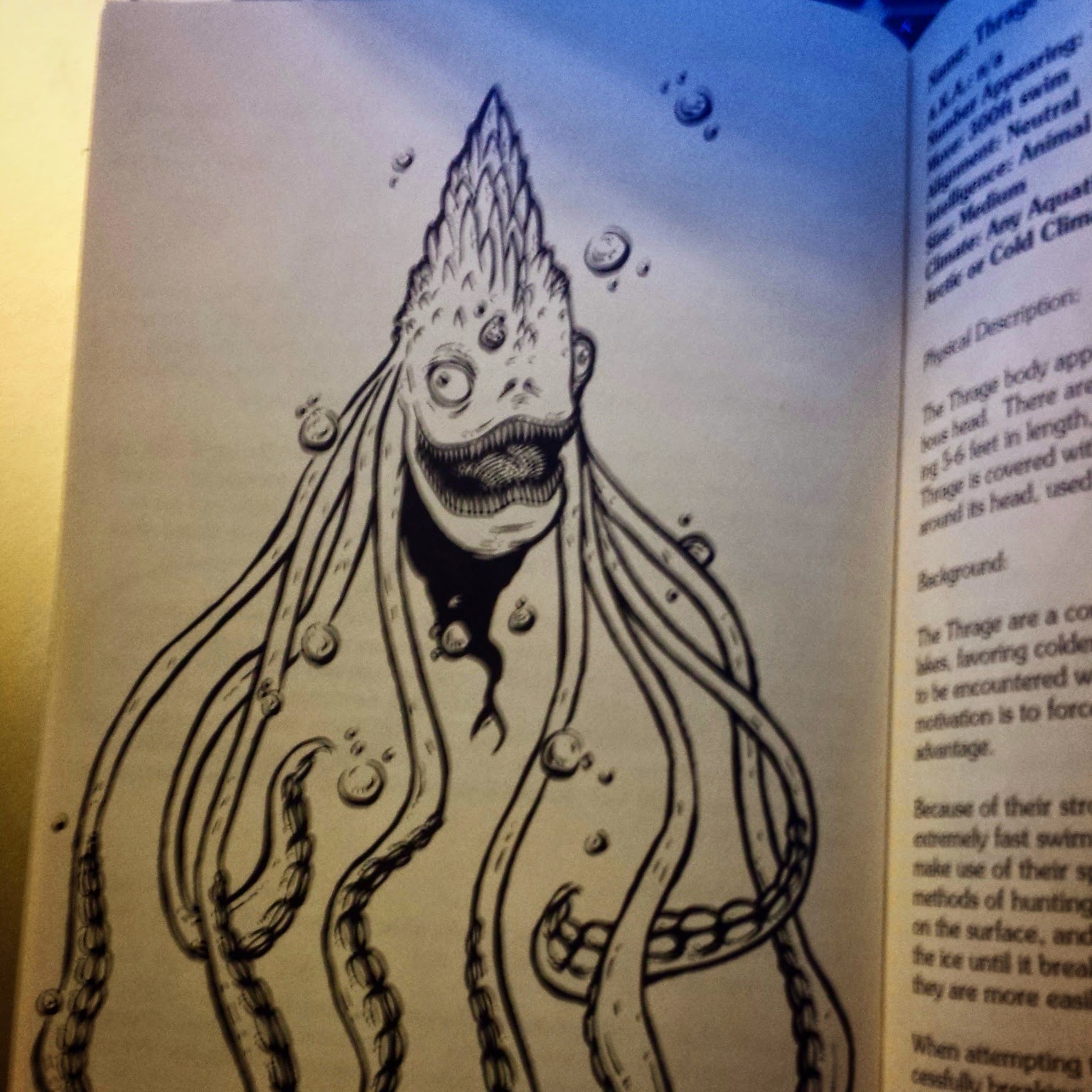 Each of the 15 monsters in this book has been designed with a niche in mind, or at least a game experience. Well done.

All of the monsters are statted out in what looks to be a sort of 1e variant (I'd have to ask Mr. Sorrow himself, but I'd guess he had 1e/OSRIC in mind here), missing some key info (like XP value) that varies from edition to edition. The Hit Dice listing for each monster seems little wonky (lots of things like "6d8+8," which makes no sense to me) and there is no common rubric given for sorting out AC (which, to me, says "fuck it, do whatever" which is probably what I was going to do anyway), so that might seem a little odd. Everything else you need is right there and ready to go though, from the strange behaviors of these Bizarre Monsters to special attacks to how to integrate each into an ongoing campaign.

Few monster books tickle the same "Fiend Factory" pre-Fiend Folio giddiness in me that things like the Stair Stalker do. This one does. Not only is it Fiend Folio-good, it's Fiend Factory good. That, to me, is what joy looks like.

Absolutely everything in this book is worth stealing. I'm actually right now working each monster into different Wilderness Encounter tables for my Iron Coast game to make sure my players understand that the world is a wild and strange place full of things like Gas Imps, Exploding Cows and Gem Maggots. The good news for you is that you can get this thing from the Bullcock Press store in print for only $8.99 or pdf for $4.99 (less if bought together) as well as in pdf on RPGNow/OneBookShelf.
0e 1e monster Monster Monday OD&D zine