27 May
Today, I'm consciously staying away from the gaming industry's big announcement. You know, the one where lots of folks are freaking out and others are saying "I told you so" and still others are saying "money grab!" somehow despite the goodwill and nearly every other person in your stream is asking you not to talk about it because they're already sick of it and it just got announced earlier today? Yeah, I will not be talking about that. At least today. You know I have things to say about it, but I'll just be keeping them to myself for a bit here. 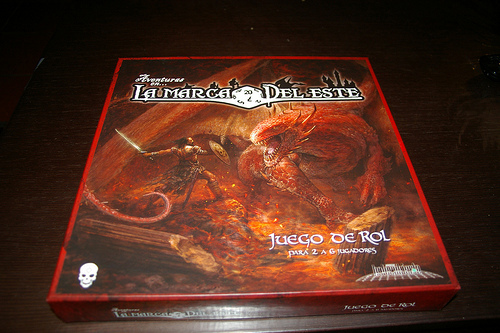 And so, let us turn our attention once again to that great boon to the RPG industry (or curse, some might say), the realm of crowdfunding. Last week, a Kickstarter I had been excited about for some time released its pdf version: Adventures in the East Mark, the English translation of Aventuras en la Marca del Este, an award-winning Spanish-language retroclone. There were a number of things that drew me to the East Mark, but perhaps most strongly due to the "Red Box" nature of the release (so much so that Uncle Frank endorses the product and wrote the Prologue), right down to its adoption of a vaguely Karameikos-like "Known World" setting.

It was pretty excellent timing from my point of view that Extra-Dimensional Publishing released its pdf just as the kerfuffle over the D&D 5e "Starter Set" was kicking up, but I think I've already covered that bit.

So, let's talk about the actual product, shall we?

Please remember that, at the time of this writing, the print version of the Adventures in the East Mark Red Box is not available, just the pdf, and so that's what I'll be talking about. The pdf package is actually several files: a hi-res pdf (a 177 mb whale of a file that is, quite frankly, stunningly detailed), an optimized pdf (34 mb), a 2.63 mb rendering of the extremely well-made East Mark map and a 2.82 mb portrait-style character sheet. The rules (whether hi-res or optimized) clock in at 143 pages (including covers), which is pretty hefty for a basic set, all in glorious full color. On a side note, a B&W version might have been nice to add to this package, if only to have an even lighter version of the file for tablets and smart phones. (Note to self: remember my own preferences for stuff like this for things I might publish in the future.)

East Mark provides everything players need to play characters from level 1 to 20 in 9 different classes, most of which closely echo their counterparts in Mentzer: cleric, dwarf, elf, explorer (the East Mark ranger, a new class), hafling, mage (magic user), paladin (new), thief and warrior (fighter). I find the addition of a paladin and explorer unnecessary in a basic set but not unwelcome. The explorer I particularly like, if only because rangers tend to be more in-demand as a character type in my games than the others. Among the "Mentzer 7" classes, not everything is as Uncle Frank (or even Tom Moldvay) wrote. Clerics get a spell at first level, for example (which makes me think that the original Aventuras rule set might have been more closely based on Labyrinth Lord). Warriors get 1d10 hp per level. Stuff like that.

The heft of this book does lend itself exceptionally well to the player side of the table. Yes, it has everything needed to present a broad basis of challenges and rewards for a parties of 1st to 20th level, but the focus here is more on the characters and stuff they can do (having enough spells to cover this level range gets pretty bulky pretty quickly). There are some rules details I particularly like, such as the removal of "racial languages," and their replacement with the general admonition that dwarves and elves tend to get the gist of and communicate basic ideas in the languages of their typical foes. Makes sense, right?

After some discussion of the overall game rules (which cleave very close to Moldvay and Mentzer), the rules move on to discuss the setting of the East Mark. 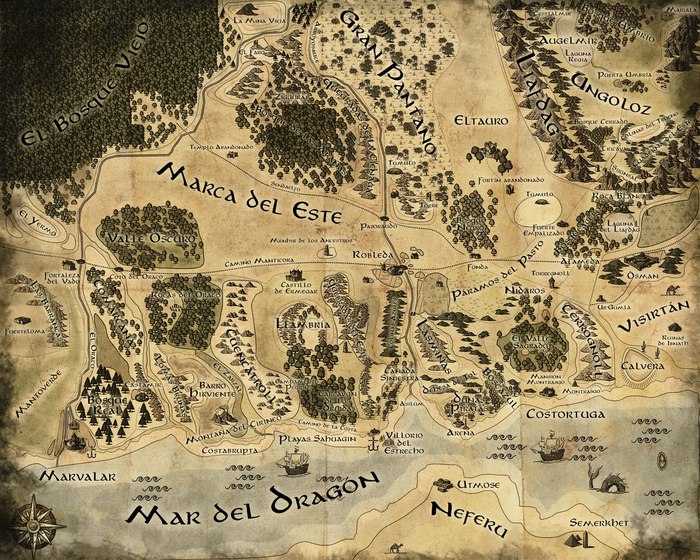 Ever notice how often we as gamers talk about the "implied setting" of a game? The East Mark is an explicit setting rather than an implied one, but one that is smart enough to give you just enough detail to use and make your own.

I mentioned before that I thought that the East Mark would end up looking a lot like Karameikos and, big surprise, it kind of does. Remembering well that Karameikos included lots of scary differing territories in relatively close proximity, we can see this model is replicated in the East Mark as well. If anything, the East Mark is a little wilder than Karameikos; sure, there is a Specularum-sized city nearby, but the setting doesn't presuppose any connection to it. Also, the East Mark (much like "marks" or "marches" in real life) is a border area, a buffer zone between different kingdoms where no one's power can be absolute, no law may be perfectly applied.

Coupled with the map, the East Mark red box book does a great job of providing just enough information on the different areas of the East Mark that I'd feel comfortable running and improvising it, shaping it to fit my vision. As-written, it kind of has a "Tolkein meets Lovecraft and Howard" sort of feel, particularly with the "post-genre" D&D inclusion of those sorts of things that I like to leave out of my D&D games (kobolds, orcs, goblins, and other predictable things). I'd like to turn up the CA Smith dial on this setting and make it a little bit weirder were I to run it, but out of the box, the setting is a solid "genre D&D" reimagining of Lovecraftian and Howardian fiction, particularly if you play down the Tolkein influences.

The Voice of Dissent

So far, I've only had good things to say, which makes sense for a crowdfunding something that I've been excited about and is actually starting to deliver. However, it'd be rather fanboy of me if I didn't tell you the few sticking points I have with the set as it was published in pdf form.

I'll bet you thought this was going to be all sweetness and light, eh? Well, as my lovely wife will gladly tell you, if there's a nit, no matter how small, rest assured that I will pick it. All in all, however, the Adventures in the East Mark Red Box pdf is exceptional. I expect that the box itself when I get it will not disappoint, either (I'll let you know on that front when time comes). This is the sort of "all in one uber-box" that could keep a guy like me without needing additional material (which I could make for myself anyway) for years. Well done, folks (both Extra-Dimensional Publishing and the original Holocubierta Editiones)! I look forward with great anticipation to your Blue Box!
BECMI East Mark Kickstarter Mentzer