A Different Kind of 1e

14 March
Howdy folks. Despite my self-imposed half-exile from the blogosphere for a few weeks while I sort out the next issue of Metal Gods of Ur-Hadad, I thought I'd drop in to give you a bit of a progress update. Things are coming along nicely and if I didn't know better, I'd say I was nearly ahead of schedule. Unfortunately, I know better, so I'm not about to make pronouncements that my ass can't cash. Now there's a finely-blended metaphor for you.

However, I can't let well enough alone, so here's an idea that I've been thinking about since I heard it. I'm pretty sure it was +Jerry Durante who first suggested this, but here's a thought that makes an awful lot of sense to me:

Any adventurer should be able to do anything that a Boy Scout can.

That makes sense. All adventurers are expected to tromp across various wildernesses and spend ridiculous amounts of time with limited supplies in cramped and dangerous underground crazy places. One might begin to expect a certain degree of competence at general sorts of useful things just to survive such experiences. You just might. I know I do.

So, I started to think about exactly what it is that Boy Scouts get trained to do. I myself never got past Webelos (which is kind of a shame; I dig all the stuff the Boy Scouts do, just not some of the core tenets or failures in leadership that the organization has experienced), and it's on its way to three decades since those days for me, so it's time to hit the books for some research. 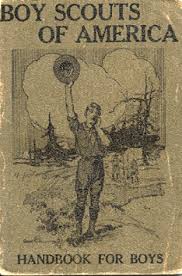 And for our research, I decided that it's best to go for the original. Yes, just as we old-schoolers love to consult 1e or OD&D (or some iteration of Basic) as the ursprung of all knowledge, I've decided that it's best to head back to 1911 for the Boy Scout Handbook's own 1e. Really, the reason I went back this far is I wasn't really sure where I should stop. Is there a definitive edition? Is there a preferred one? Rather than start a completely different set of edition wars, I figure it's safe to just crack the pages of the first edition.

According to the 1e Handbook, there are three ranks of Boy Scout: Life Scout, Star Scout and Eagle Scout. Attaining a new rank is a function of earning enough qualifying Merit Badges, which are a sort of certification (expressed in the form of a patch given to the person who earns it that is worn on his uniform) expressing a degree of competence or proficiency in a particular field. I'm not sure if this overall Life/Star/Eagle Scout structure is still in effect (I presume there are still Eagle Scouts, what with that idea still being firmly within the public consciousness).

To attain the rank of Life Scout, a scout is expected to earn the following five Merit Badges: first aid, athletics, life-saving, personal health and public health. The Star Scout  rank is gained by accomplishing an additional five Merit Badges, and the reason that we as lay people recognize the Eagle Scout as a thing is that the Eagle Scout earns at least 21 Merit Badges in order to be called that. Some of the skills that you can earn Merit Badges for -- even in 1911 -- aren't exactly applicable to your typical D&D setting, but let's take a look at the rest of the badges and what sort of proficiency they imply. (I'll list all the badges, but put the ones that I don't think would apply in most settings in [brackets].)
So there you have it. That's the list of Merit Badges from the very first edition of the Boy Scout Handbook. Obviously not every adventurer is going to know how to do everything on this list, nor should every PC have a list of the Merit Badges he or she has. Rather, it should illustrate that adventurers should have an awful lot of knowledge about a lot of different stuff. You and I aren't adventurers (as far as I know), and while we might not have the specific sorts of knowledge mentioned here, our characters will need all sorts of crazy and off-the-wall knowledge (as well as some practical stuff, too) just to get by. The list of Merit Badges above is all stuff kids can master, so why would it be hard to believe that your PC can as well?
1e Metal Gods of Ur-Hadad zine