Warlock Week, Day Three: On the Use of Magic

One of the things that folks point to as a major point of departure from OD&D in The Complete Warlock is the nature of Magic Users & Illusionists in the system. When you first glance at the Magic User advancement table, you'll notice that most of it is pretty similar to the sort of thing you've seen before. Level, Hit Dice (which is sexily similar to OD&D's HD progression because, much like LBB OD&D, TCW uses only d20's & d6's), XP per level and Spells per Level. Sure, that's the normal stuff, but there's a major change to the OD&D spellcasting system that's not on display here: TCW uses a spell point system on top of a spell memorization system. 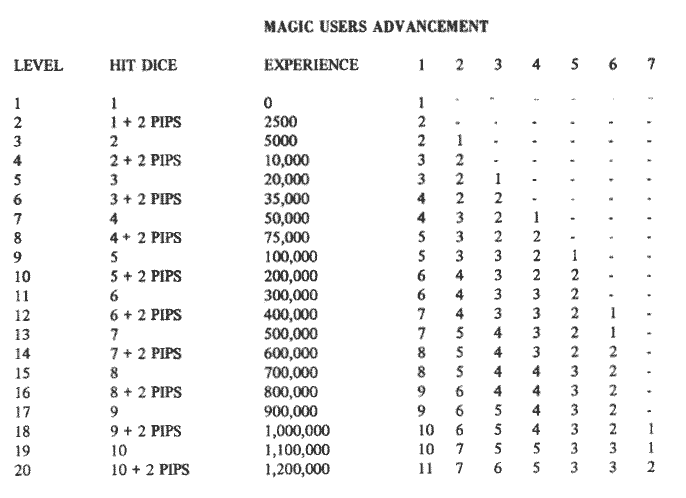 Here's the way it boils down: Magic Users (and Illusionists and Elves) memorize spells to create a daily repertoire of spells which are then paid for when cast with spell points. The spell points represent not merely another resource to manage (like hit points), but there's an entire in-game spell point economy for them. Not only can you use spell points to cast spells, but each spell has a spell point cost to learn which must be paid both in gold and in spell points. How fast can you learn that spell? Only as fast as you can contribute spell points toward learning it. Why stop there? TCW also applies this spell point system to magic item creation, requiring that a certain amount of spell energy be imbued in an item being created.

So far at least.

Looking at the advancement table, you'll see that there is no indication of how many spell points MUs and Illusionists get per level or anything. The thing is, your spell points are actually on there, just not in a terribly obvious manner because you get a number of spell points equal to your hit points plus your level. Thus, a 4th-level MU would get 2d6+2 (HD for a 4th-level MU) plus 4 (level; 2d6+6 [average of 13]). That 4th-level MU would have access to 3 1st-level and 2 4th-level memorized spells, which have a spell point cost from 1-4 and 1-6 respectively, and it's not terribly likely that the spell point values of those memorized spells divide up nicely into 13 spell points (or even any combination of them), which means that an MU isn't likely able to get full use out of all the spells they have prepared (unless they roll well for hit points).

This degree of swinginess isn't unusual in old school games nor in OSR ones, so I doubt there are going to be many people interested in TCW that would cry foul here. Still, it feels like there might be some room for Prime Requisites to have some influence here, but that's not in the RAW.

Before AD&D introduced the concept of Schools of Magic, Warlock added a "Magic Class" to each spell that categorized the spells based on broad associations with the elements, personal Will or Outside forces. The Magic Classes are (and their opposites):
Looking at these classifications, there are some things that confuse me (why aren't cold and heat magics opposed? Wtf is "Inanimate" magic?), but they're simple and straightforward, just like a lot of the stuff that TCW adds to the OD&D framework and form a really solid building block of Warlock's magic system. On top of this Magic Class framework, Warlock adds a system of spell descriptors as prefixes that mean very specific things (and feel like a spiritual predecessor to 3e's metamagic). Here's the short version:
TCW also describes a few basic shapes of spells and the prefix-descriptors modify the details of these shapes:
So, basically, you can alter any spell in Warlock by changing its shape or adding a descriptor. This sort of LEGO magic system ("just put the right blocks together the way you want them") feels like the sort of thing that I came up with when I was a kid and decided to invent with my own RPG (for no reason other than to create my own because, you know, that's what you do at some point, right?), which is to say that it seems like a good idea, but I'm not terribly sure it is because it might just be a generification of existing stuff that already has plenty of flavor to go with the crunch. MAXI-fire-BOLT just doesn't get my motor going the way that "fireball" or "lightning bolt" (or even the remarkably poorly-named "delayed-blast fireball") does.

Before I go, I would like to touch briefly on Illusionists as distinct from Magic Users. While Illusion magic is described in TCW as being crazy powerful, it will always be trumped by the age-old "I roll to disbelieve!" and in TCW, the saving throw to do so isn't that difficult. A character's "Disbelief Score" is 21 - Intelligence. Thus, an average guy (Int 11) will disbelieve on a 10+, which equates to 55% of the time. While that chance never improves with level unlike other saves, it still seems pretty high. What's the point in being an Illusionist if 55% of the time an average Joe sees through your illusions? Might as well take up stage magic, you'd have a wider margin of success.

So, there you have it. That's what -- in broad strokes -- Magic User-style magic is like in The Complete Warlock. Next time, I'll be screwing around with Clerics and the unique bits they get to play with.
3e Complete Warlock OD&D