27 February
Today is the money shot, people. Of all the classes and rules tweaks that The Complete Warlock offers, nothing deviates further from OD&D nor is more innovative than the Warlock Thief. Before we dive in whole-hog, let us consider Thieves in OD&D for a moment. First, they weren't around during the early days; our modern conception of a "core four" of classes did not exist when the LBBs were published. Instead, it wouldn't be until Supplement One: Greyhawk for the thief to be in print in an official capacity, but a previous version by Gygax was published in the Great Plains Games Players Newsletter in May of '74 and then again published as "The Thief Addition" for GenCon VII of the same year. Bearing in mind the '75 date of the original Warlock article in The Spartan, the same year that Greyhawk hit, it seems most likely to me that the Warlock Thief (if he was present in a state similar to that of TCW) is most likely based on this original Gygax thief, if not some other California-based iteration of the thief that caused Uncle Gary to write his own (which is entirely possible).

The more time I spend with the Warlock rules, the more sense most of them make to me. Not in an intuitive "I see it all so clearly" sort of way, but more of a "but what about? Ooooh, that's why" way. The Thief really brings this idea home for me, especially in light of the last post. The HD progression of the Thief, for example, follows the standard HD flow of 1, 1+something, 2+something else, etc. Something I had left out of the previous post because I didn't understand it yet is that the difference in levels between an attacker and a defender is calculated based on HD, not level, which curves the attack progression by HD progression. A sort of elegant way to do it, really. For terms of that calculation, the pip bonus to HD (the "+2" in "1+2") increases the HD by one if its "+2" or greater, meaning that a 2nd-level Thief fights like a 2nd-level character, but that both a 4th- and a 5th-level Thief fight like 4th-level characters. There are some epicycles to the Thief's attack progression... very interesting. 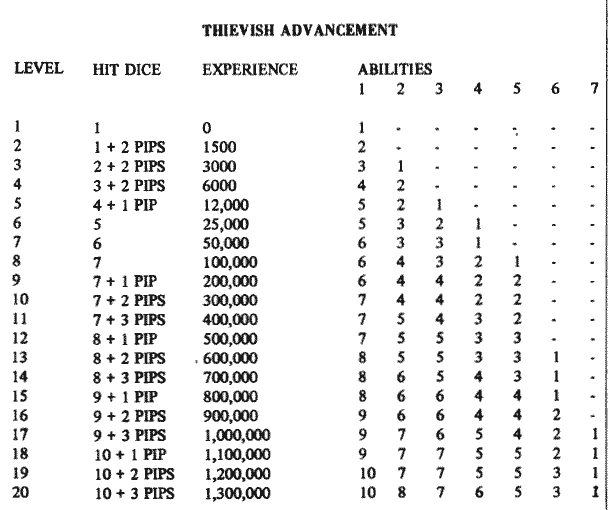 Thieves in Warlock don't meet with the same generous XP tables that they do in Greyhawk; instead, their XP required per level most closely resembles that of the Cleric. Any class can multiclass with Thief (sorry, combination class), and, once we get into the Thief skill system below, it starts to feel like the Thief is less a unique class and more a class membership in which allows one access to a skill system. That really wouldn't be terribly shocking; after all, that's the whole reason the OSR blew up a few years ago in debate as to whether thieves should be a class at all, right? Well, the Warlock Thief is going to blow the lid off what you used to think about thief skills and amazingly presages some things we won't see in mainstream D&D for decades.

See that table up there? The "Theivish Advancement" table? Notice how, to the right of the "EXPERIENCE" column, it lists "ABILITIES" and then shows what looks an awful lot like a spells-per-day matrix? That funky thing is the key to thief skills in TCW, because here, unlike in OD&D each Thief is different because each Thief picks his own Thief Abilities (rather than just following a standard progression by level according to a level-based table). In TCW, Thieves pick a number of Thief Abilities per level according to the chart above, but here's the thing: in order to pick a higher-order (say, 2nd-level) ability, the Thief must also have taken a lower-level prerequisite (say, 1st-level). Once that 2nd-level ability has been chosen, the Thief's lower-level slot that had been taken up with the prereq then opens up and the Thief may cram a new ability in there. 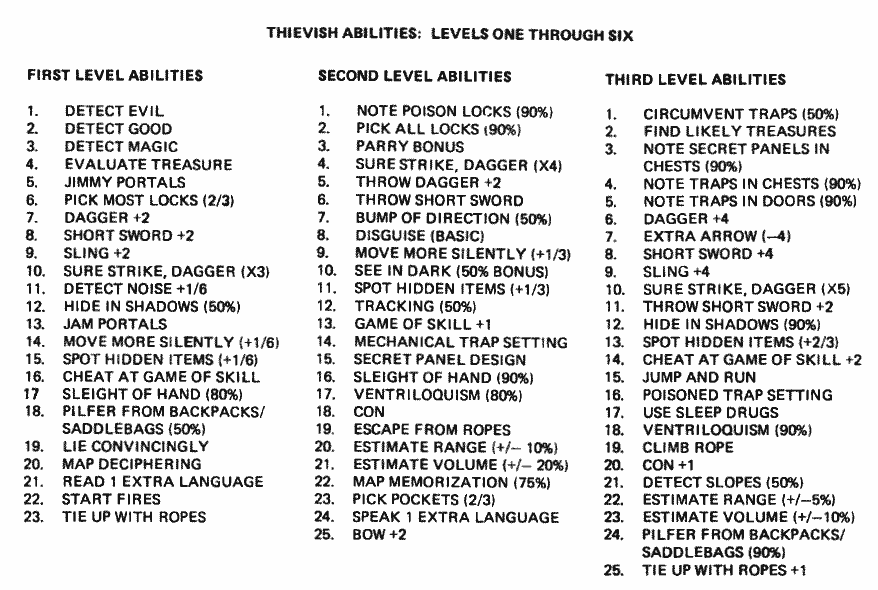 Let's look a little more closely at some of these abilities, shall we? Some confer a combat advantage (Sure Strike, Dagger x3) that can later be upgraded (Sure Strike, Dagger x4) and others (Hear Noise +1/6) boost an existing ability possessed by all characters. Still others grant the Thief access to one of the classic "thief skills" of D&D like "Pick Most Locks 2/3" (meaning "4-in-6 chance") or "Hide In Shadows 50%." One of the things I immediately notice is that each of these abilities makes the Warlock Thief drastically more capableb than his D&D counterpart but, true to TCW form, means that he is specializing in that particular schtick and likely missing out on some other facet of "thievishness" that the D&D version allows. You don't necessarily get both the Thief's improved ability to Hear Noise as well as the ability to Pick Locks at level 1 in Warlock; you have to make a choice.

It's in this choice structure - choices between discrete, granular abilities and their improvement - rather than the old "sliding scale of ability" that sets the TCW Thief apart not only from the Greyhawk Thief (and, indeed, OD&D as a whole), but also apart from the skill systems that would see widespread use through the FRPGs of the '70s and even '80s. The "skill tree" nature of picking lower-level abilities to "unlock" higher-level ones is a common feature of games (both tabletop and video games) these days, and the discrete benefits conferred by TCW's Thief Abilities are reminiscent of the "talent trees" many games put in place (often completely separate from a skill system) and even, dare I say it, 3e's feats.

Don't blame Warlock for opening up those floodgates, though. It apparently took 25 years for D&D to even notice.
3e Complete Warlock Greyhawk OD&D thief