19 February
Welcome back to Warlock Week, my seven-day investigation into The Complete Warlock and its inner workings. For those just joining us, TCW was an early OD&D "variant" first published in the pages of the Spartan, a wargaming fanzine, in 1975. Warlock, as this early variant was called, was more or less the version of D&D being played on the campus of Caltech, prompting many (including Uncle Gary himself) to call the system "Dungeons & Beavers" after Caltech's team mascot. In 1978, Balboa Game Company published The Complete Warlock, which took information from the original Warlock and updated it, expanding the system to cover new rulings the Caltech folks had come up with in the intervening three years. It's important to note that throughout the process of publishing the Warlock rules and then updating them into TCW, the gamers behind the system made sure that it was explicitly stated that Warlock was not a game in and of itself, but rather variant rules for D&D; that, rather than pretending to create its own rule set ex nihilo, Warlock recognized its roots in D&D and knew that it couldn't just walk away from them and call itself something new.

Now that you're caught up, today we're talking Clerics. 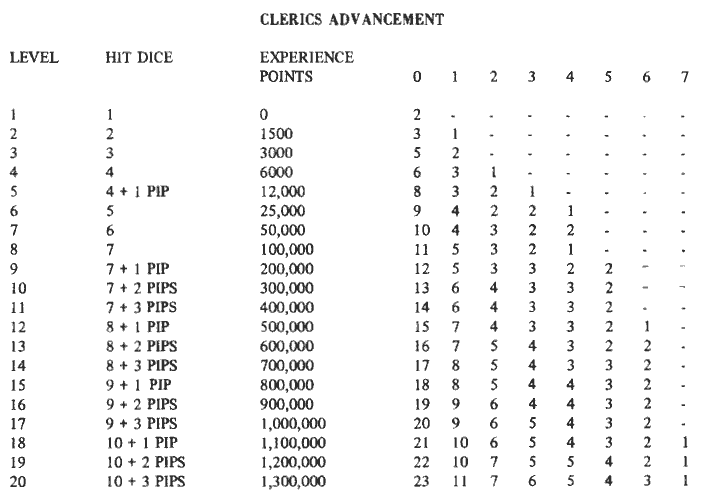 Magic Users, Illusionists and Elves got that cool Spell Point mechanism from "yesterday," so doesn't it make sense that Clerics should get something cool, too? Of course it does. In a move that predates Unearthed Arcana by 7 years, TCW introduces zero-level spells, but only for Clerics. At first level, a Clerics would still not get a first-level spell, but instead would get to cast 2 0th-level spells, which is an interesting move. These 0th-level spells aren't nearly as powerful as 1st-level ones, and lend the Cleric a degree of "niche protection" even at first level that they normally don't get until higher levels (like level two) when they get access to signature spells like Cure light wounds. Yes, you should have read a degree of sarcasm into that. I don't think that a class feature (the ability to cast spells) that you get at level two necessarily requires any sort of niche protection, but hey, let's keep on moving here.

Taking a look at the 0th-level spells for Clerics, there are actually some pretty interesting things here. The Heal spell is here, but heals 1 hp, which is in many interpretations of the rules just enough to keep someone from dying. Your go-to detection spells, Detect evil, Detect good and Detect magic are all here and, like many spells in TCW, vary in range with level. So sure, you can cast Detect magic as a first-level TCW Cleric, but it only has a 1" range, so you're not doing too much detecting. The Purify water and Sanctify water spells are solid dungeon utility spells, allowing you to go from dungeon dregs to holy water in a mere two castings. The neat thing about this holy water, though, is that it will only affect undead of lower level than the Cleric, so undead will always be a challenge of one degree or another. Speaking of undead, TCW lists Turn undead among the 0th-level spells, leaving the Cleric's player with some tough choices. "Cast Heal to keep the Fighter from dying or Turn undead to get those pesky zombies all up out of our collective grills?"

Sure, that's an oversimplification, but let's think about it from the other side. Say you're in a dungeon that's somehow not filled with skeletons and zombies and ghouls and your Cleric doesn't have the opportunity to cast Turn undead. In systems where there's no limit to turning attempts, you're not really losing anything, just an opportunity. Here, precisely because your Cleric is limited in turning attempts (read: 0th-level spell slots), giving you something else to do with them becomes more important. Later editions of D&D will introduce similar concepts like 3e's "channel divinty" options. Or maybe that was the 4e term. I can't remember. Anyway, it seems like later editions go back to the well and look to answer things the same way TCW already did.

Speaking of spell slots (which we kind of were), here's a neat detail: TCW Clerics don't prepare or memorize spells. They can, at any time, cast any spell that's on their class spell list and they have an available spell slot of the appropriate level. ACKS players & DMs will recognize this scheme right away. It's easy, it's flexible and it lets the Cleric shine in a multitude of high-utility ways. Then again, the LBBs aren't exactly clear on Clerics and spells, and under certain readings, this could be a perfectly reasonable interpretation of the text.

Of everything that I've read so far, it's the TCW Cleric that makes me want to run something using at least parts of the Warlock rules. Knowing me, those parts would probably get chopped up and blended with parts of other stuff until it came out the other end looking nothing like it did on the way in. But hey, that's life. Or just gaming with me. Which, when you think about it, is kind of what the Warlock crew did in the first place. Rock on, Beavers!
3e 4e ACKS Complete Warlock OD&D