23 February
I had to cut my last post short due to ... imminent sleep. I really could have kept going if I'd had the energy, but it just wasn't in the cards. Here's the stuff I had to leave out.

We'll start this off with a hot-button issue: multiple attacks per round. Obviously oblivious to the snickering it would likely cause in the infantile minds of their readers, TCW chooses to describe this topic as "Blows Per Phase" (likely differentiating "blows" as melee strikes rather than ranged attacks; see the discussion of missile fire below). Every iteration of D&D I can think of (other than OD&D itself) and most retroclones each have a way of handling multiple attacks per round. 1e uses a level-based determination method, as does BX & BECMI/RC, and 3e trades off accuracy in successive attacks. ACKS and other systems use a "cleave" rule, while Delving Deeper allows Fighters (and only Fighters) to attack a number per round against weak opponents equal to their levels. Near as I can tell, OD&D contains no such rules, and it's not until Greyhawk that a single line (the statement that Men get 1-2 attacks per round on a chart discussing number of attacks per round and damage by various polyhedral dice rather than just d6s). 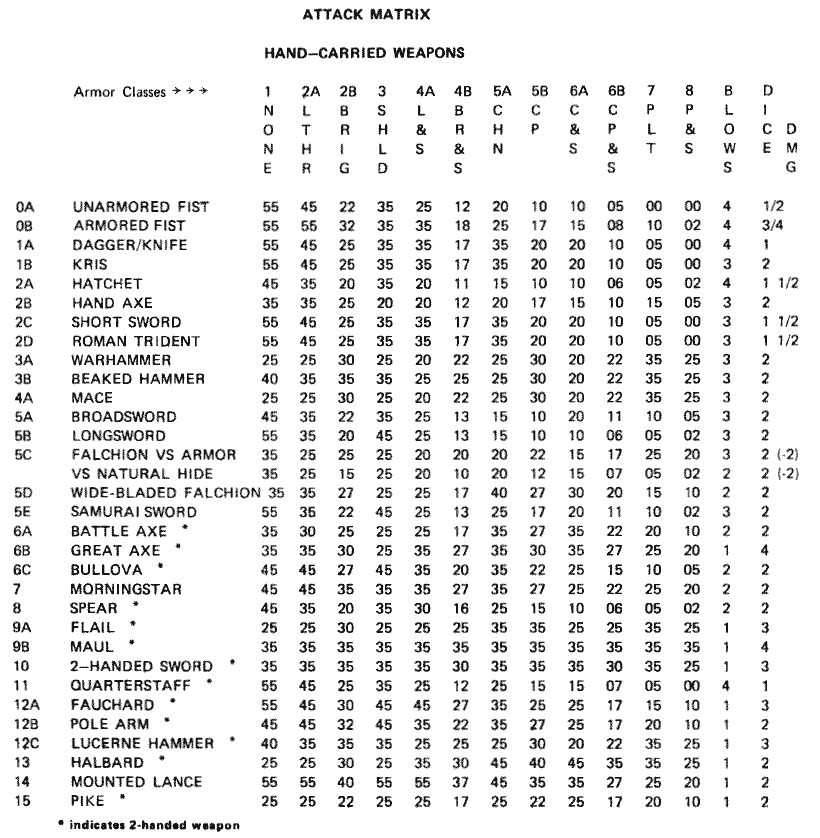 And so, it's no surprise that Warlock takes a stab at a multiple attacks rule. Instead of tying number of attacks to the ability of the individual, however, TCW ties it to weapon type. If you look closely at the Attack Matrix (hey, here it is again!), you'll notice there's a "BLOWS" column, which lists the number of times an unencumbered person could attack with that type of weapon per combat phase. Rather than using the term "unencumbered" though, TCW describes the exact amount of movement (12") an unencumbered person should have. Using that logic, TCW goes onc to gaining a number of attacks based on the weapons "BLOWS" reduced by the same proportion that the character's movement has been reduced. This "BLOWS" stat doubles as a sort of encumbrance mechanism, preventing remarkably encumbered folks from using weapons that have few attacks per phase. Which makes an awful lot of sense when you notice that large, unwieldy weapons have a low number of attacks per phase, whereas light weapons (such as ye olde dagger) allow up to four attacks per phase.

I'll save the reduction of attacks per phase for the actual Warlock text (I'm just here to discuss the text, not reproduce it, really), but there's another neat connection to draw here: the heavier weapons that get fewer attacks per phase also do more damage, making the trade-off in speed meaningful. Normally, there's a degree of parity between number of attacks and damage dice, such that number of potential attacks times the number of damage dice usually equals 4. The "holy grail" of Warlock "combat optimization" is finding the weapons that manage a "6" rather than a "4;" nearly categorically, these weapons are  the ones that we tend to think of as the workhorse-type weapons PCs get the most use out of: swords, axes and warhammers. You know, the good stuff.

There's an unseen part of this trade-off: the complexity of dividing out attacks per phase for every weapon your character uses and altering that calculation every time your character's encumbrance changes. Ugh.

The Complete Warlock doesn't use the then-conventional term "missile fire," but rather the not-quite-as-accurate term "Archery" to discuss all manner of ranged combat. Let's start with the big difference between melee and missile combat: "Archery" uses a d20 instead of a d100 and a "roll high" rather than a "roll low" target. But it doesn't end there, oh no. In fact, Archery is so dissimilar from TCW melee that the only similarity that the two seem to have is the fact that dead bodies will probably be left behind afterward. 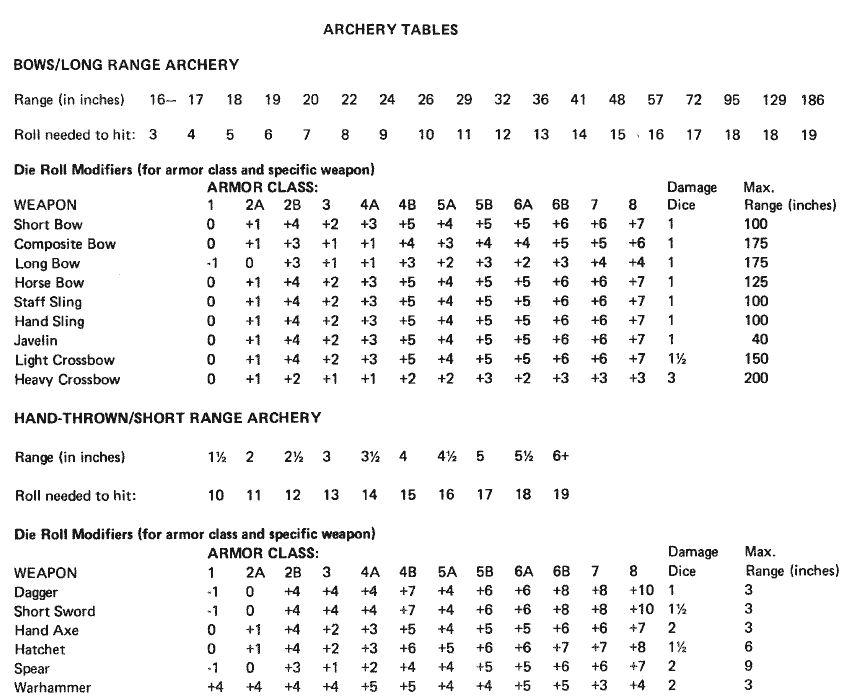 Here's how it works: range is king. Closer targets are easier to hit, and that's the primary determination of how tough it is to hit folks, with armor and weapon type having only a modest effect. First, you determine range to target on the Archery Attack Matrix (look to the left here); that's your base "to-hit" number. After that, compare it the weapon you're using against the type of armor being worn (note here that AC doesn't work quite the same way in TCW, but it is a simplified ascending AC system not unlike ACKS, so I won't go into all that) and add the resultant number to the "to-hit" number. There's an adjustment for Dexterity, then roll that number or better (but don't roll a "20" because there is no "20" on a TCW d20; they describe this die as a "die number 0-19," so they interpret what we'd call a "20" as a "0") and you've hit.

Remember how Uncle Gary used to say that if you were playing D&D with critical hits you weren't actually playing D&D? Remember how no one paid attention to him when he said it? Yup. The Warlock team didn't pay attention, either. If you roll a natural 19 on your d20 Archery roll, you've scored a critical hit, whereas if you roll a 0, you fumble. Melee is much more complicated and requires a huge table (which you need to consult every time you swing a weapon since varying ACs and weapon types not to mention levels will produce different melee hit probabilities). 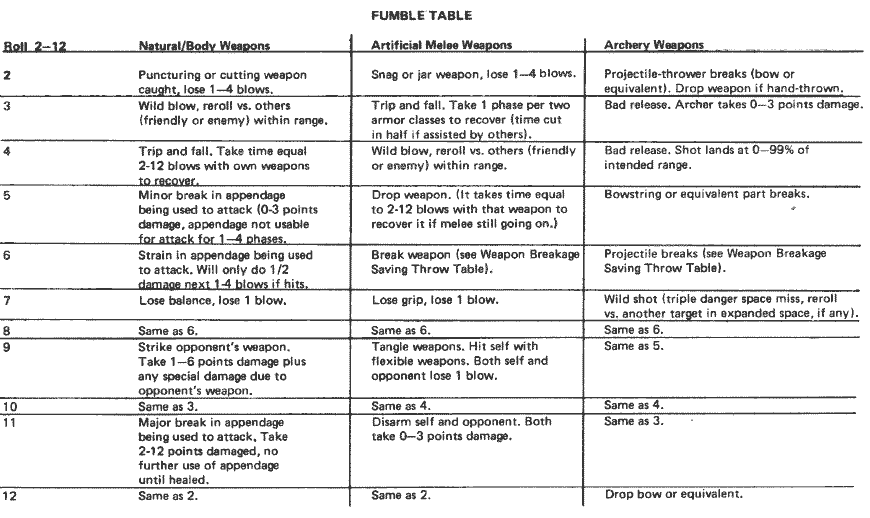 Fumbles, thankfully, are fairly easy to work out (far easier than Critical Hits). After determining the fumble, roll 2d6 and consult the Fumble Table. The effects of the fumble can range from losing attacks to doing damage to one's self (or even others), knocking one's self prone or disarming one's self, and so on. Not as extensive as DCC's laudable tables, but they're simple and they do the job. Here, there's some variation between natural melee weapons, normal melee weapons and missile weapons, which is pretty smart. I'd actually have liked it if DCC had gone this route (and there might be something in an upcoming issue of MGOUH going this route).

Crits, though, get a bit stranger. After rolling (and then confirming) a critical hit, you roll to see where you hit your opponent (using 2d6 so there's some central tendency here, which is nice), with separate charts for each body type of enemy that you can reasonably expect to go up against. Sure, unreasonable and non-standard body shapes like your Gelatinous Cube might not be represented, but that really doesn't make as much sense as you might have thought before you got to the end of this sentence. That having been said, some strange foes like Beholders just aren't represented here, but they're the exception, not the rule.

After rolling for location hit, you roll for the actual effect of the crit, which doesn't necessarily mean extra damage. Two different tables are given, one for "Impact" (read: Bludgeoning) and Slashing weapons and another for Piercing weapons and Archery; these distinctions make some degree of sense, and at least we're not overloaded with a ton of varying crit tables. Ah, who am I kidding? I love crit tables. So yeah, I'd take one for each damage type and be happy, but that's not what TCW gives us. Each crit usually gives an effect beyond additional damage, so things like "weapon lost" or "shield broken" or "10% KO" are pretty common here. It's smart stuff and similar to what you'd find in DCC, which is really my gold standard for crit tables. Are the tables good? Sure. Are the tables great? Maybe not so much from my stand point.

Combat in Warlock is... significantly different from OD&D. It's not the strangest nor most unduly complicated system that I've read (I'm looking at you, Rolemaster!), but neither do I see it as the answer to what I'd like to see in an OD&D environment. The big point of departure for me from OD&D combat is the sheer amount of damage that can be dished out using these rules. Basically, combat in Warlock seems to be all about a balance of three separate axes: accuracy, speed and damage; movement along one or more of these axes is balanced by movement along the other(s), which sounds great until you realize that the balance point seems to favor very large amounts of damage (up to 4d6 for a great axe). Sure, I could crunch some serious numbers here to figure out how this all shapes up, but the amount of attacks that are capable along with the dice of damage that the weapons do seems to favor a nearly Palladium-esque amount of combat insanity. And sure, that stuff can be fun, but it's not what I'm looking for. Sorry, Warlock, but your combat rules just don't work for me.
1e ACKS BECMI BX Complete Warlock DCC Delving Deeper OD&D