Minis Monday: I Made A Something New

21 January
Folks who've been paying attention to the blog over the past few months have probably noticed by now that I've been more interested in minis and wargames in the last six months or so than in the previous year. My steady decline back into being a minis guy started with my rekindled interest in HeroQuest about a year ago, but has really been fueled by my recent discovery of the Oldhammer scene. I'm currently working up my Oldhammer Norse army (it's turning out well, thanks for asking), but I'm still getting my painting chops back, so I'm trying to practice as much as I can. A little bit ago, I put together a pretty solid beastman unit, but I know my skills need some work, and this fantastic Michigan winter should mean an ideal opportunity to get some work done, but, once I'd built all my minis that I could, and I painted everything I had primed (which, at the time, was just a unit of dark elf corsairs that didn't turn out the way I'd hoped), it was a bit too cold outside to do a ton of priming the old fashioned way (open air, cardboard box), so I started thinking about how I could make the job easier in general, not just for Michigan winter. And so, I came up with a device my wife is calling the "Optimus Primer" to help me prime things quickly, easily and without my fingers getting super mucked up with paint. Here's what I did: 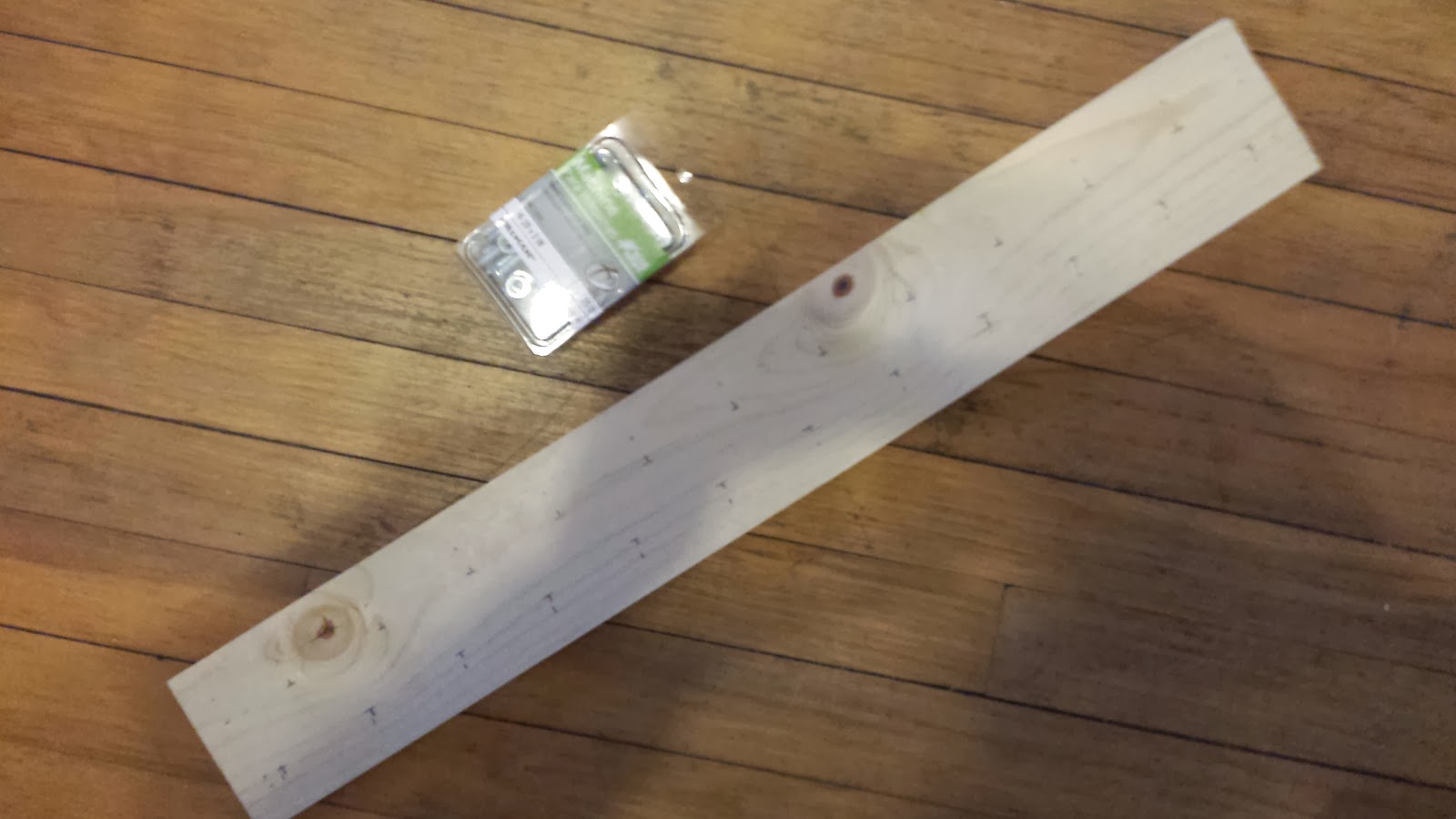 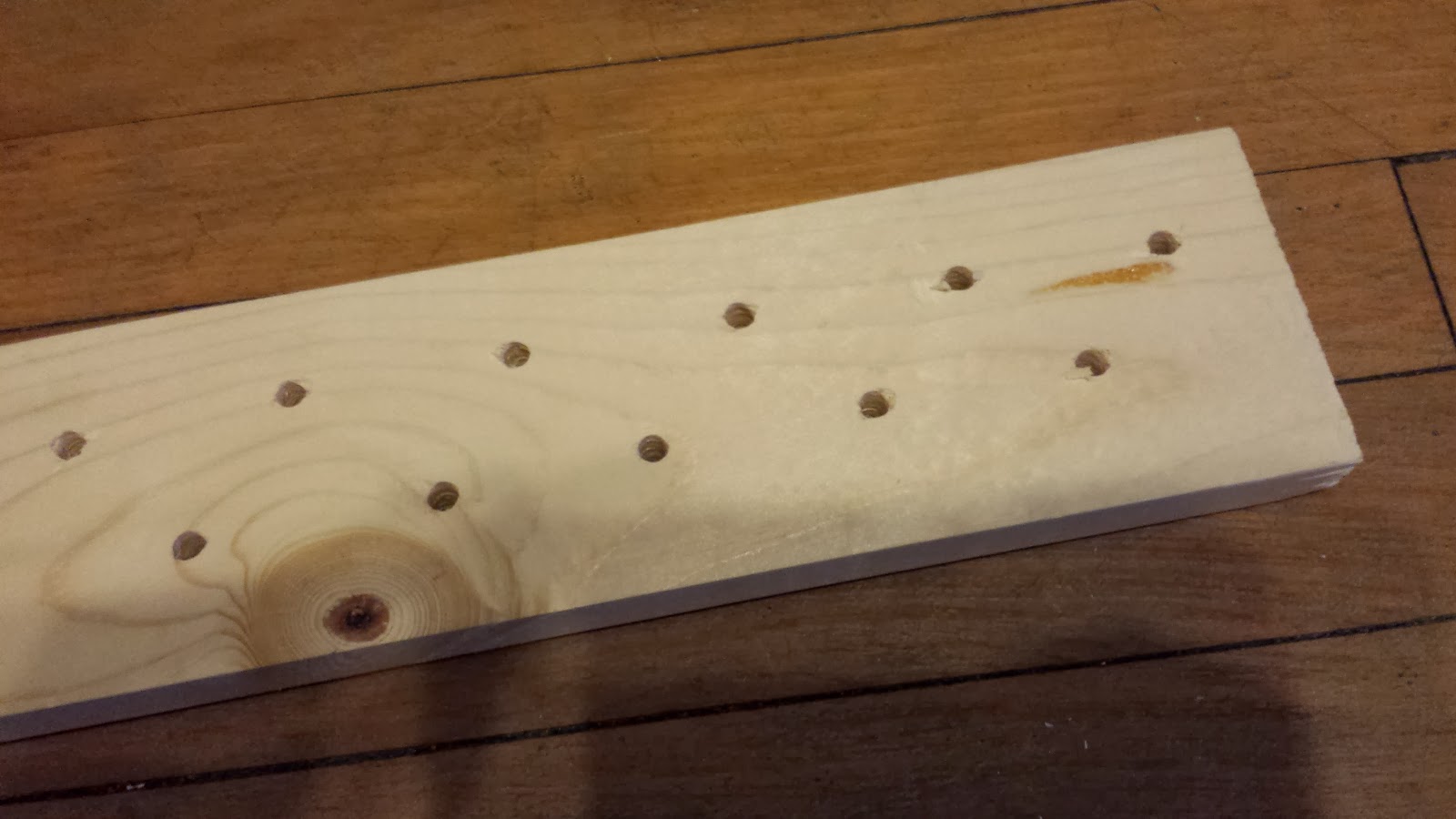 These 1/4" holes were drilled for the machine bolts that you see in the first picture. I bought a bunch of 3" long, 1/4" diameter machine bolts. Oh look, I drilled holes the exact same size as the bolts that I had bought. How about that? Coincidence? Or perhaps I meant to do something like this? 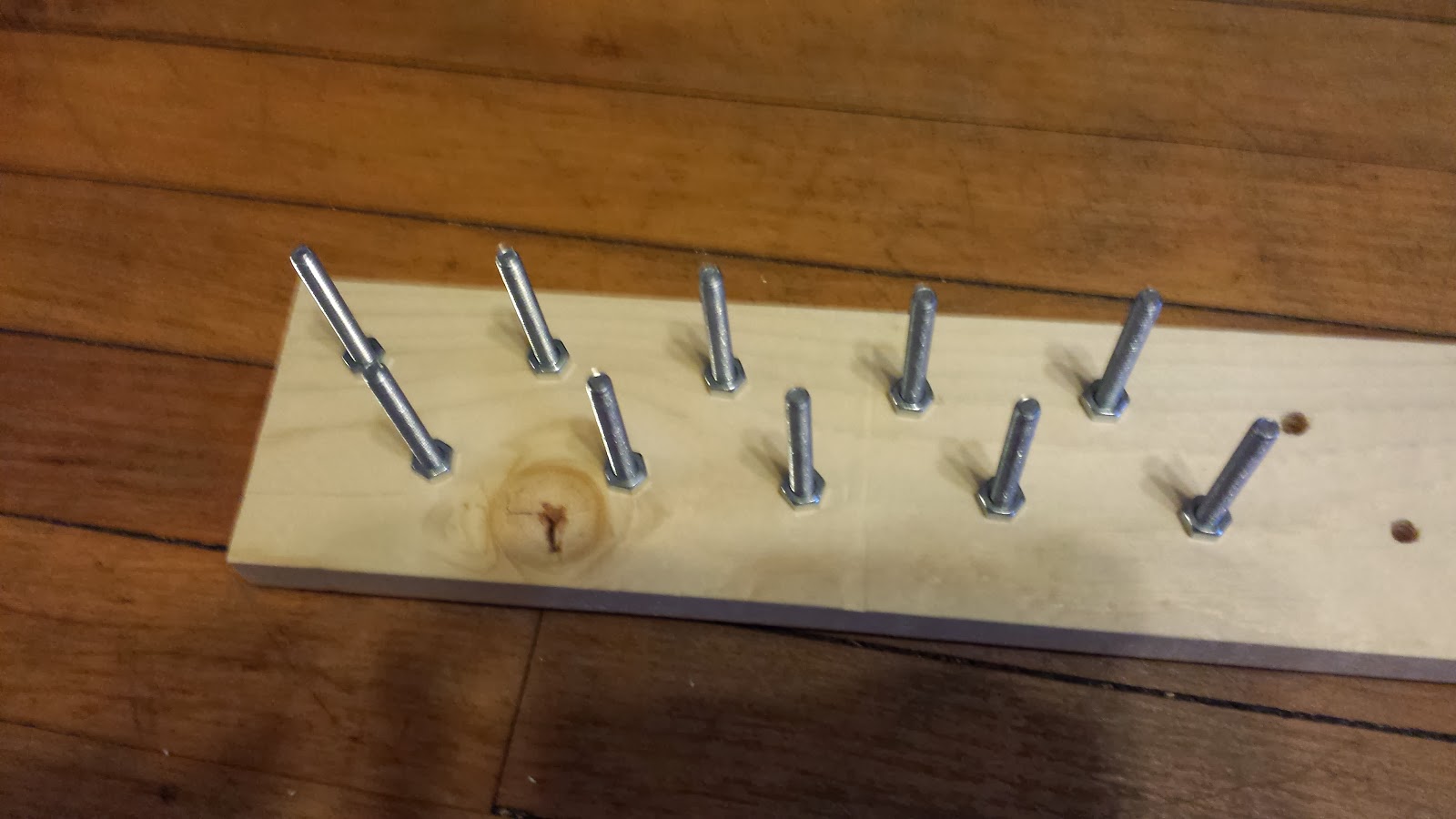 Yep, that's what I meant to do. After tightening some bolts down, this thing was in ship shape. Next, I took ten wine corks that my wife and I had "lying around" and bored a hole in each. Guess how wide? 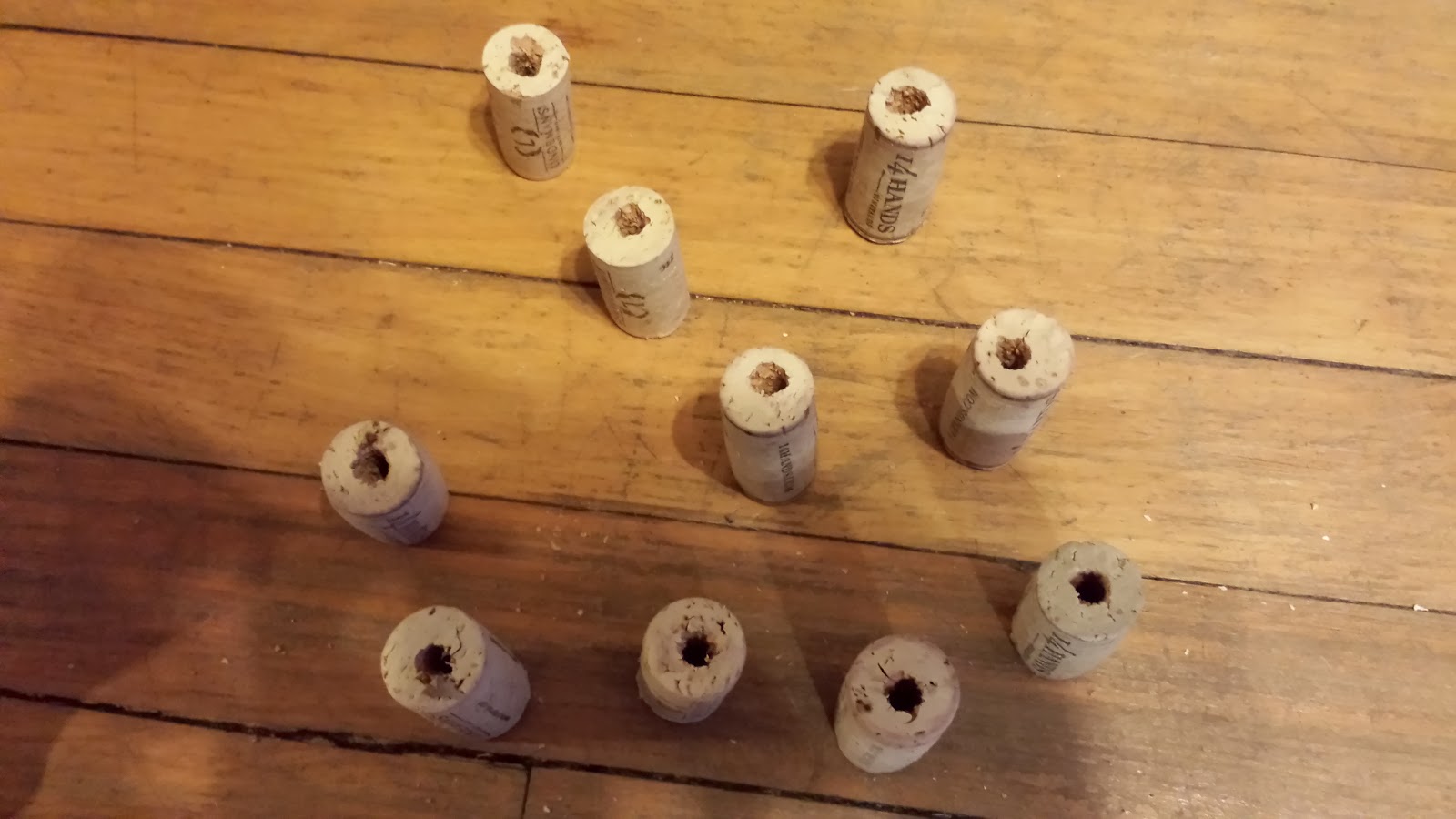 Did you guess quarter inch? Good. These guys go on top of the bolts so that minis have something to sit on while they're getting primed that I can rotate. Here's what that looks like: 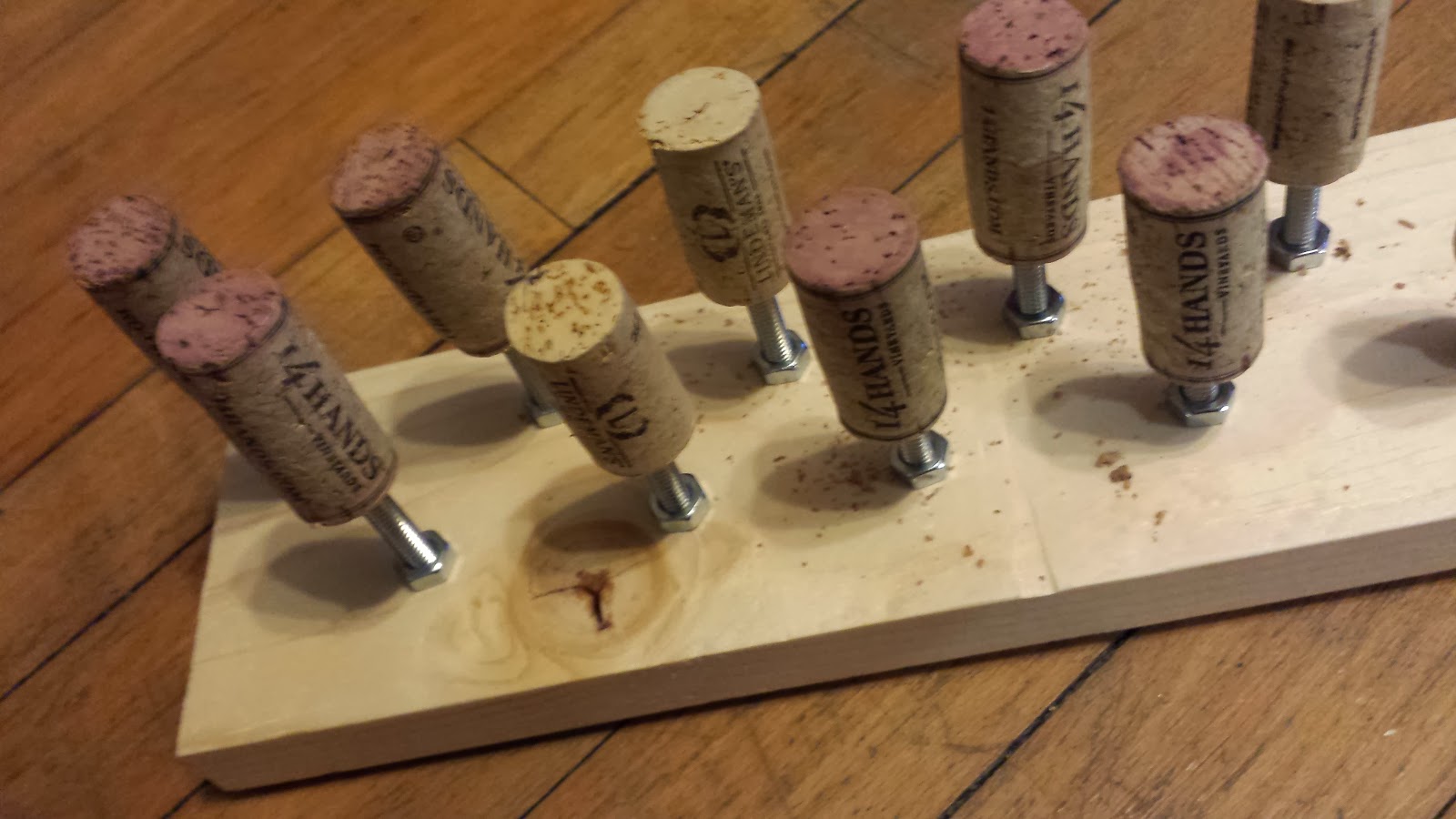 It took me a little bit to get some of these guys on there straight but hey, I don't have a drill press. Nor do I have a place to put one. So, now that we see what I built, let's see it in use. I start by putting a big chunk of that poster putty stuff on the bottom of the mini so it will stick to the cork like so: 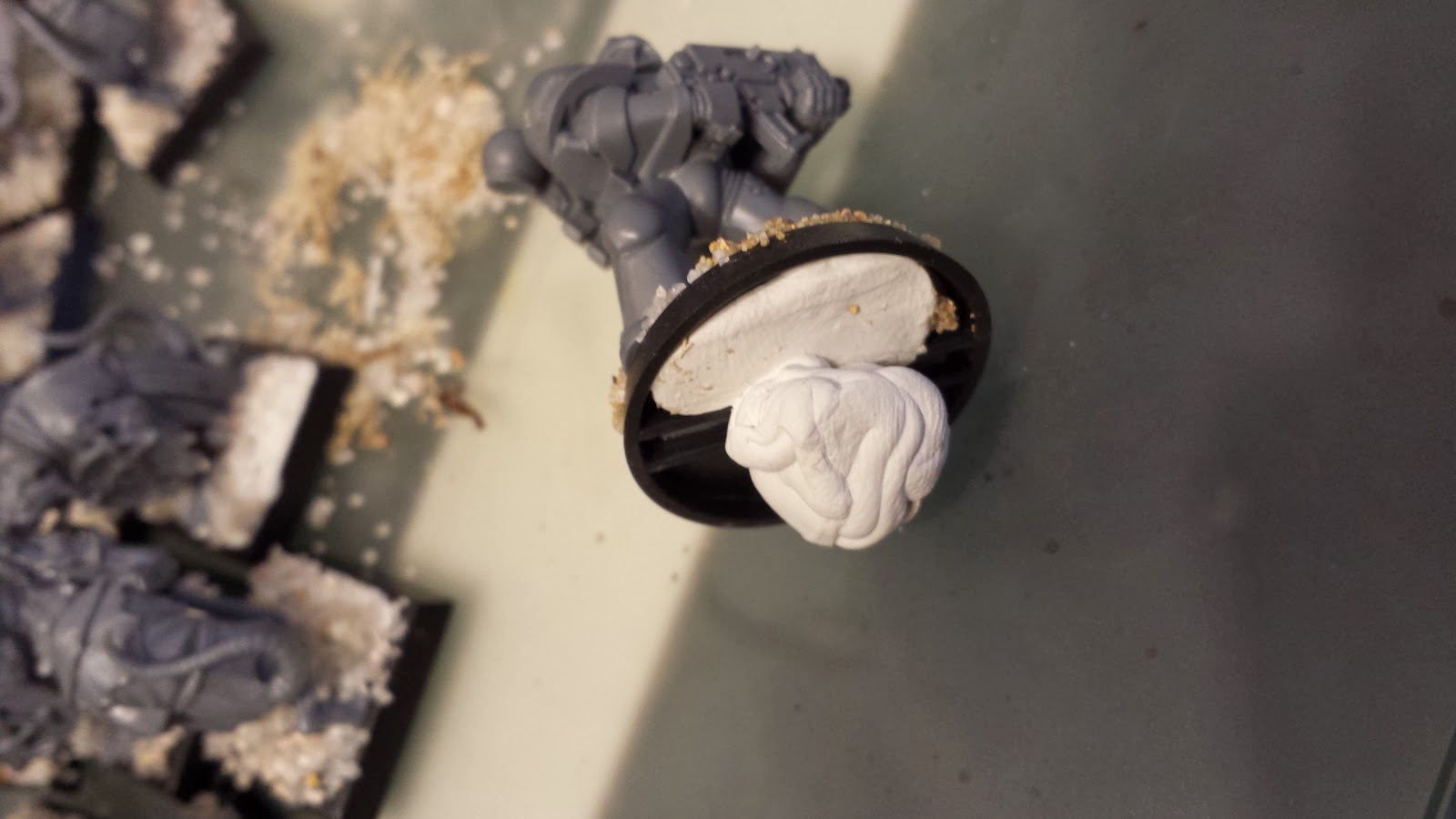 And then onto the cork ye olde Space Marine goes. 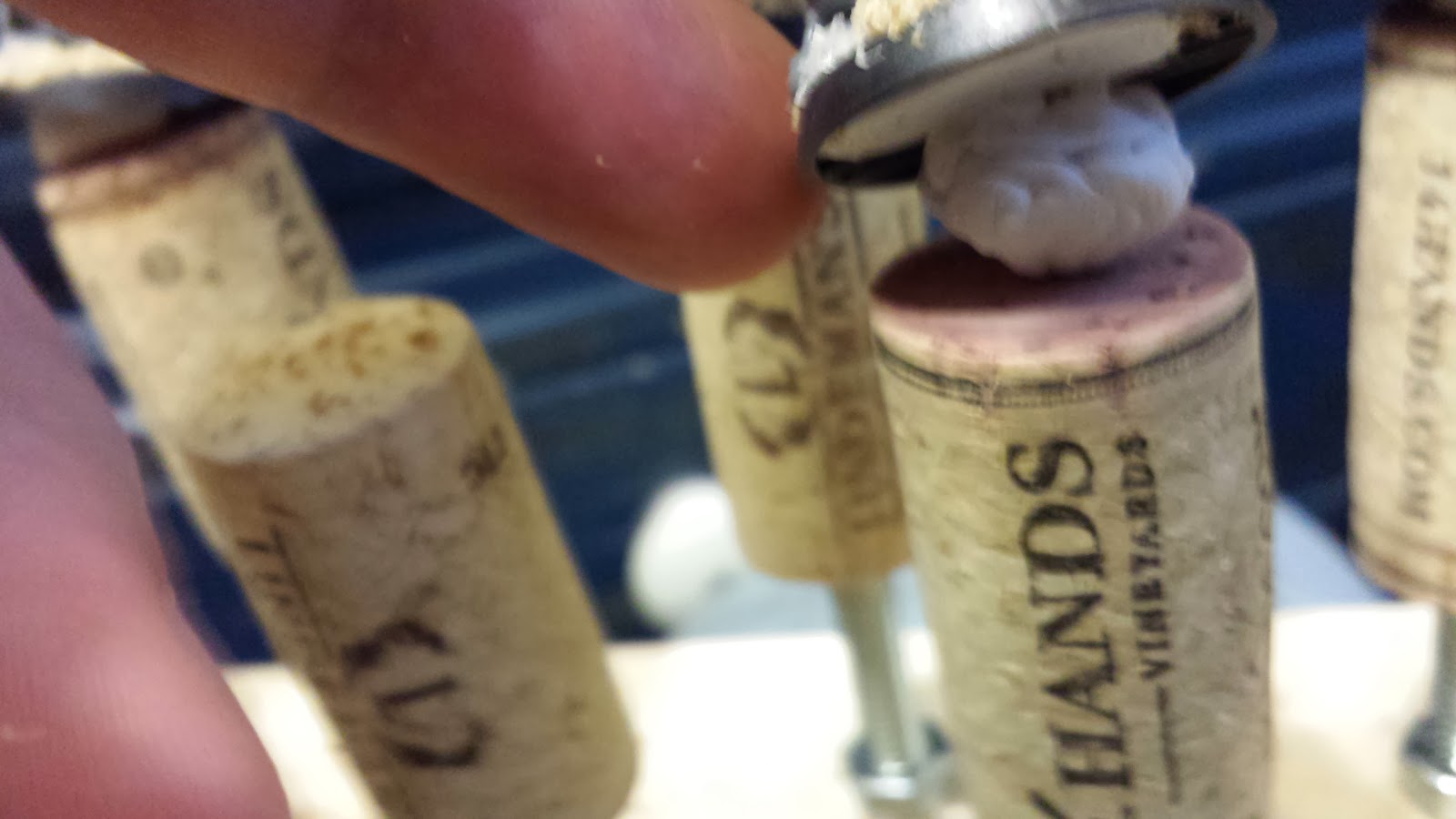 And here's what everyone looks like on their respective corks. 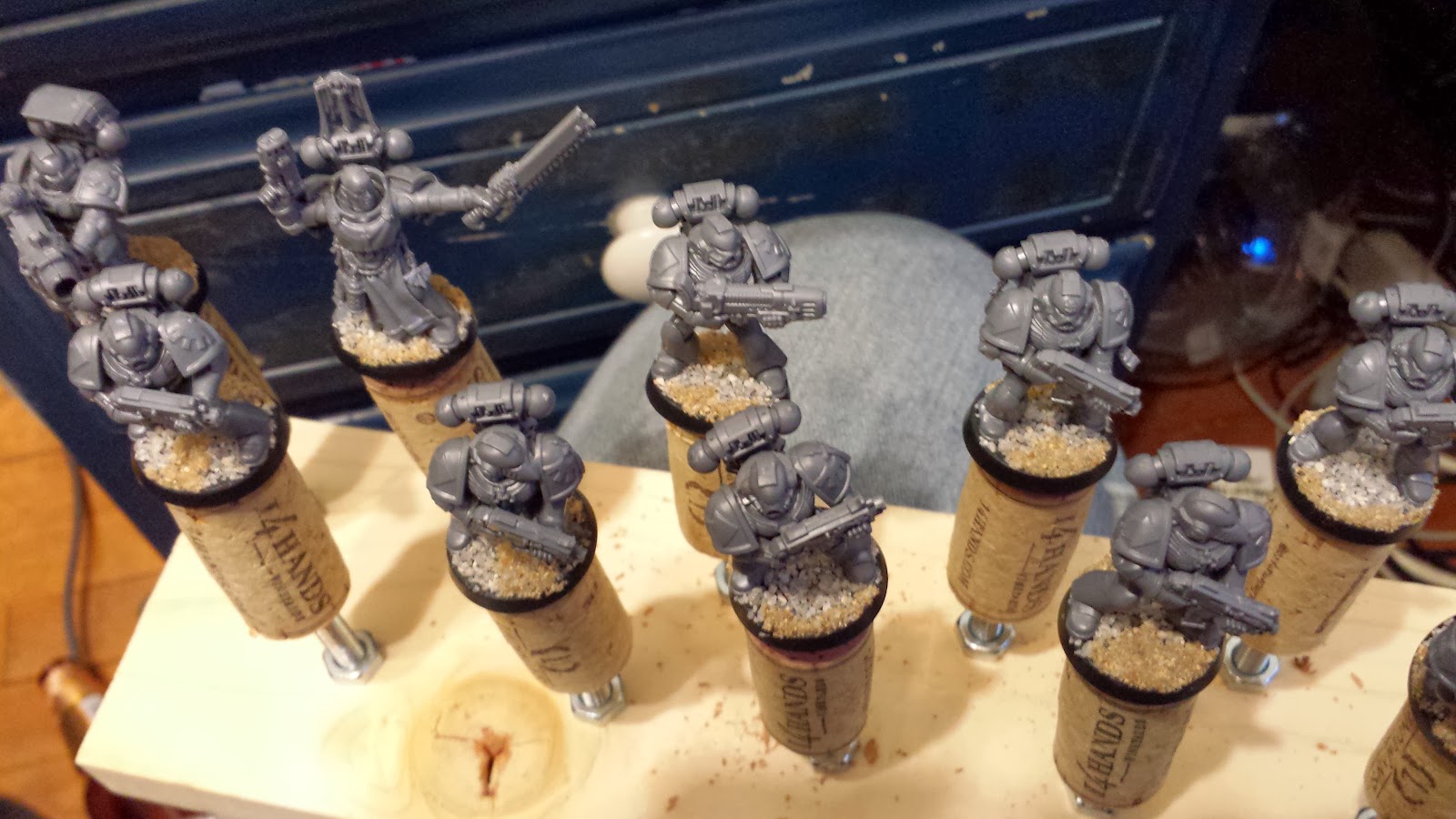 The astute out there will notice a few things here: (a) I just talked about Oldhammer and here I am painting Space Marines. Sue me. These guys are easy to paint and a great way to practice. (b) I base before I paint, so I can do it all at once. (c) Yes, these are Dark Angels from the Dark Vengeance box. They will not be when I finish them. No, I haven't bought Dark Vengeance, but I just might to have the minis. I'm planning on fucking around with a Space Marine army, but I'm not the kind of guy who can just paint his shit up to look like some crap that someone else came up with, so I'll be doing my own paint scheme, my own chapter, stuff like that. And yes, I already know what that will be and you'll get to know more about that at some point in the future. But forget all that crap, let's see how this thing works.

I took the "Optimus Primer" outside and used some painter's tape to fasten it to our balcony/back porch thing. You'll notice the cars one storey down in the following pics. Only some are ours. 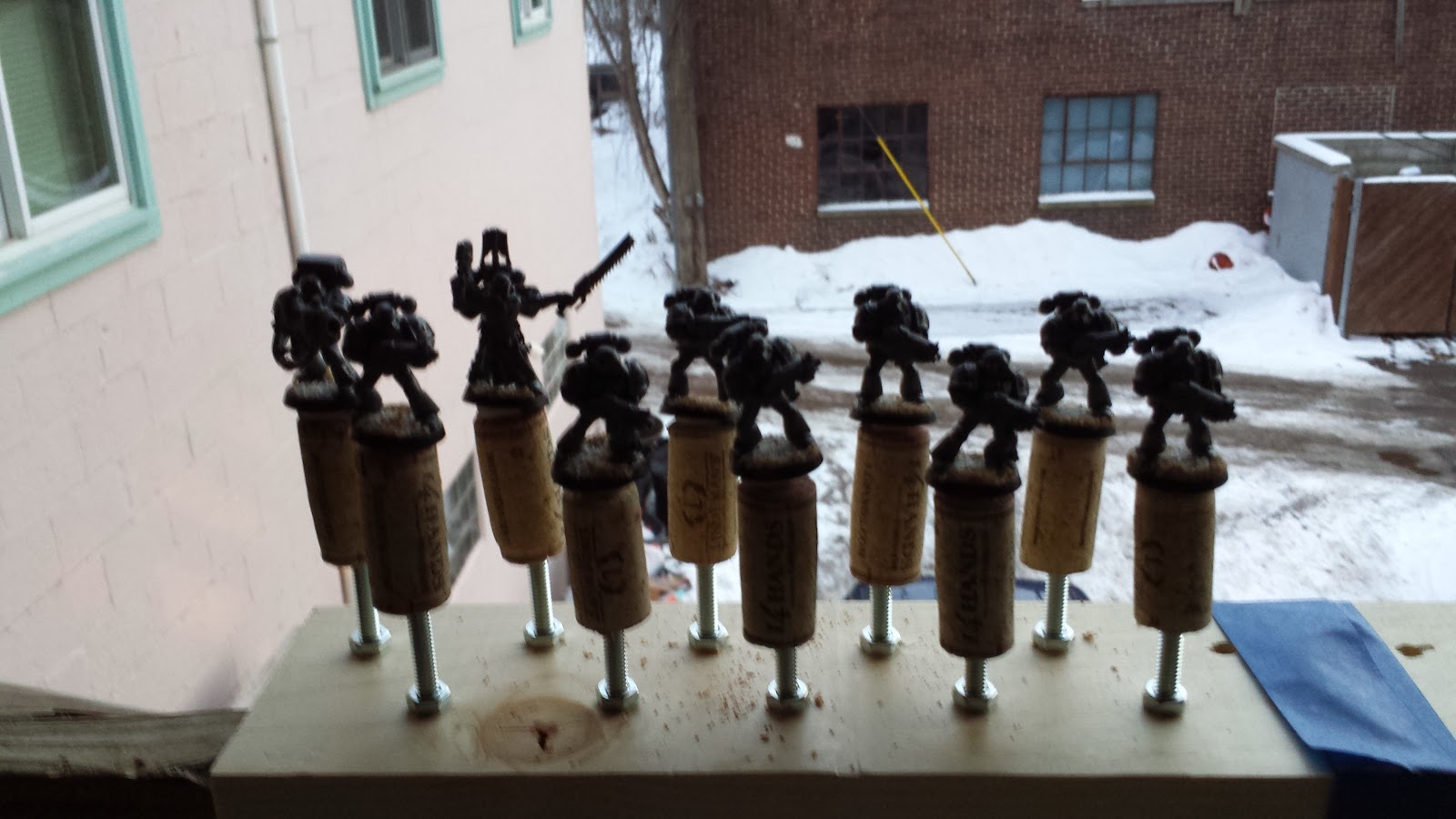 Here are the marines (and painter's tape) backlit and little more than silhouettes. Let's throw down some paint! 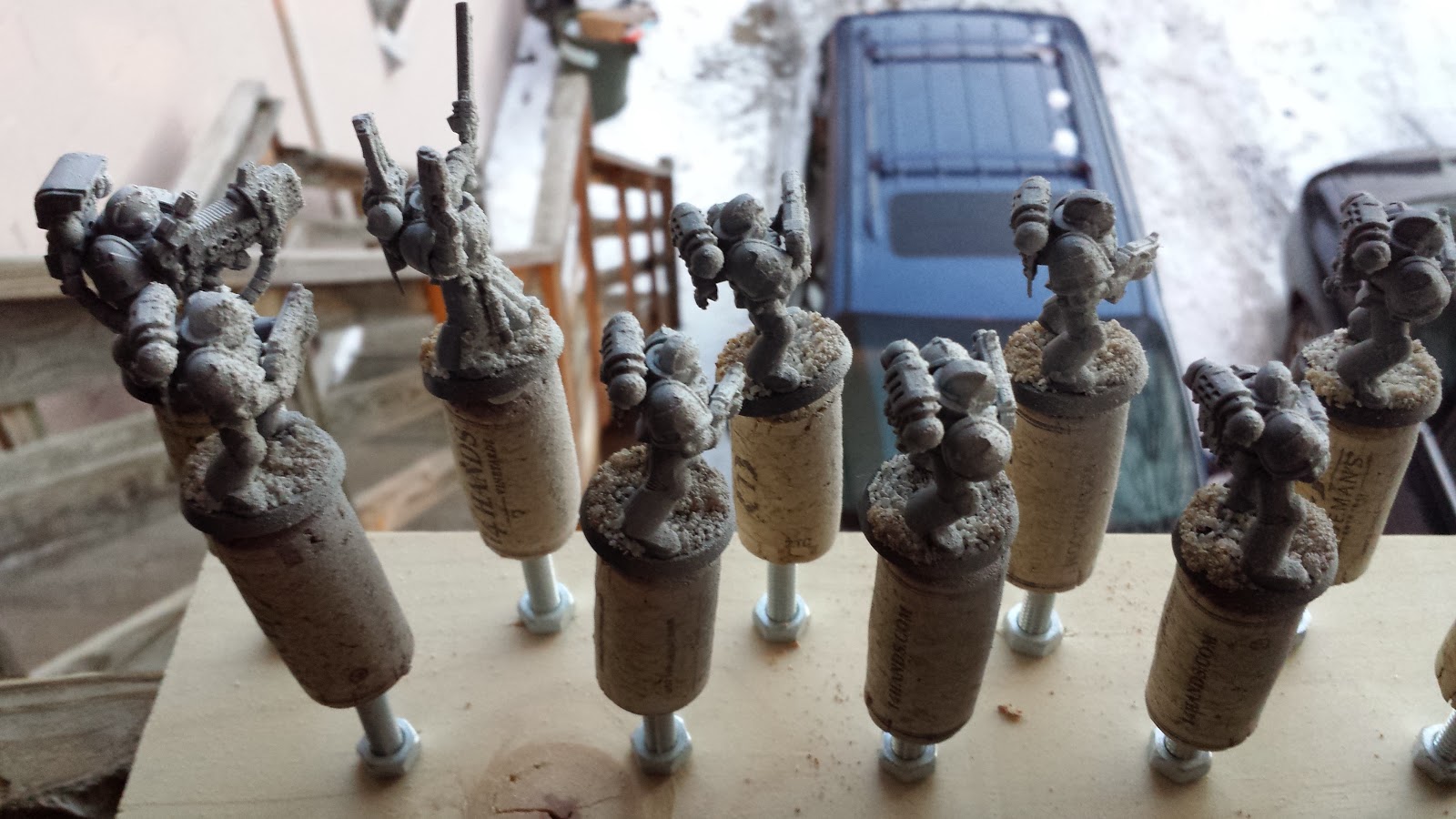 One coat of paint down and rotated 90 degrees. If you make the mistake of making this pic larger, you'll notice that the paint went on horribly gritty. Yes, folks, I made the mistake of using Armory White Primer. Ugh. It turns out that when it says "shake for 1 minute" it actually means "shake for one whole fucking minute" and then spray the shit enough that it's spraying clean. Yeah, I should have done that, especially since I knew that there's a thing about Armory Primer. 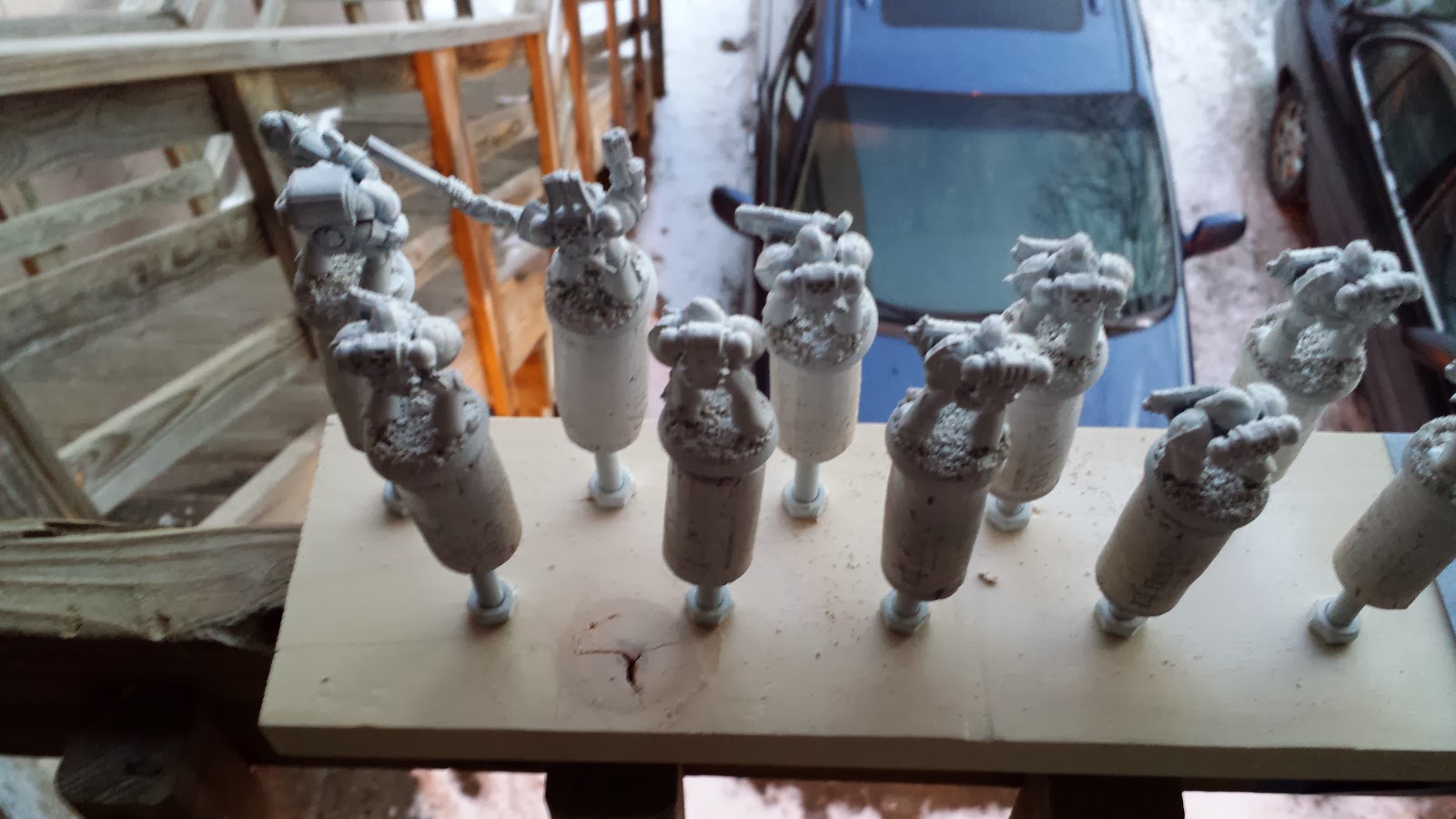 So, rotate the guys another 90 degrees and another quick coat. The primer went on well after the messy grit on their fronts and the "coat, rotate, coat, rotate" system worked crazy well, especially since the the bottom of each cork was clean of spray. I should have thought to use a wind break, though, because it got a little gusty yesterday, so I had to wait for the wind to die down before putting coats on.

Mission accomplished, though, and the "Optimus Primer" works damn well. The only problem was with the primer, not with the stand holding the minis. The ability to rotate them improved my game on the "priming efficiency" scale and it gave me something really neat to do with my Sunday afternoon. It seems like sometimes even I forget that I can be a pretty handy person; the tradition of building things to make jobs easier is a long one in my family and this was a neat opportunity for me to actually build a thing. I plan on making a few changes to old Optimus, but that's a topic for another time. As for the marines themselves, I think I actually will try to paint them, despite the Armory grit, just in case they're not so terrible. I don't plan on spending a lot of time blogging about minis and wargames and such, but I thought I'd share some of the junk I've been working on.
minis Oldhammer Warhammer