06 December
Anyone who has talked to me in person (or even on G+ hangouts) since August knows that there's a particular Kickstarter project that left me filled with rage.,  No, I won't talk about it here, though I am often sorely tempted to. Just alluding to the existence of this particular project and how upset I am about it has gotten me kind of pissed off all over again and has nearly derailed this entire post up in my brainspace. But I won't let that happen, folks, because I have some projects to praise. Yep, praise. Let's get started.

Some readers might remember that I talk about RuneQuest from time to time. I feel odd admitting this, but I've admitted it before, and so I'll tell you folks that (a) I've never played RQ (nope, not ever, not even once), nor (b) did I realize until last year that RQ was so pivotal an early RPG that it provided the basis of the BRP system that one of my favorite games of all time, Call of Cthulhu, runs on. Yeah, I just didn't touch it. So, when my interest in the history of RPGs branched off from D&D into games, I started checking out this RQ thing and I really liked what I saw pretty much across the board, whether the edition was published by Chaosium, Mongoose or Design Mechanism. So, when the RQ6 hardback came up on IndieGoGo at a kick level that cost pretty much the same as an RQ6 softcover but would net me not just the hardcover, but also a slipcover for it and a (legal and drm-free) pdf copy, I had to bite. Once the campaign was over, I watched the updates eagerly until about a month or two ago, when all the other crowd funding stuff and zine stuff pushed old RQ6 right out of my brain, so it was a fantastic surprise on Black Friday when my copy showed up (and, as someone who works in retail, that was a pretty sweet thing to come home to). All in all, this project came to fruition fairly swiftly and the end result is, frankly stunning. I feel like I lucked out on this one. Well done, Design Mechanism, well done. 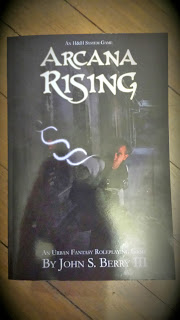 I have a few friends (primarily +Jonathon Repholz) who talk about the golden age when they'd pick up every product that rolled out of the doors of TSR and would devour them. That form of customer loyalty is very rare in today's RPG market (except for all those rabid Pathfinder folks; have fun with the profits, Paizo!), but I've found a company that I'm willing to gamble on. I'll be the first person to admit that I'm not typically a fan of modern-day settings, and so, when I heard that Bedroom Wall Press were making one, I felt that, if BWP's Hulks & Horrors had taught me anything, it was that BWP were great at making flavorful, interesting settings and robust OSR rules to match. I also thought that, if worse came to worst and Arcana Rising sucked, I'd at least have supported a publisher whose other work I really like. Yes, as far as I'm concerned, H&H was good enough for me to spend another $20 on another product by the same company even if that other product ended up being crap. The good news is that Arcana Rising lived up to my expectations of a BWP product and presents a solid old school rule set in an interesting modern-era setting. Huh. Who knew. I'm still far more likely to play H&H, but AR is pretty damn tight. 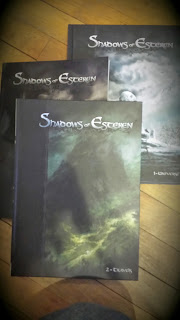 A bit ago (was it a year?), I got really excited about Shadows of Esteren. This French-language RPG looked gorgeous and proposed to blend a few genres that I adore. While Agate hyped the game's Cthulhuoid horror aspects, what drew me in (other than the promise of antediluvian evil) was the merger of that horror with fantasy in a manner that seemed to suggest to me the films of Guillermo del Toro, particularly Pan's Labyrinth and Devil's Backbone (we don't need to talk about anything else, ever). I had meant to get in on the Book 1, Universe Kickstarter when it went live last year and so I was really surprised when this year Agate launched a KS for Book 2. These guys seem to be translating stuff at a crazy rate. In fact, mere weeks after the completion of the KS, Agate had copies of the book ready for KS backer pick up and for sale at GenCon. Whaaaa? Didn't you only just get your money? How did you do that so damn fast? It was about that time that I realized that the KS wasn't so much to fund Book 2 as it was to fund Book 3. Hmm. Anyway, the Shadows books are remarkably sexy affairs, with fantastic full-color art oan every page. I'm serious. I can't find a page that doesn't have any art on it (of course, I'm not looking terribly hard). Reading the books, though, I've found a few spots where they might have wanted to slow down the translation schedule because some of the word choices... were... not ideal. One of the core characteristics, for example, is called "Combativeness." That just doesn't roll off the tongue the way you might want one of the defining traits of every character to do. Similarly, there are some instances of wonky syn tax or awkward wordings that I've learned to associate with ... not necessarily bad translations, more like improper  translations. Remember in school when you were told to select the best answer from a list where most or all of the options were true? You didn't get that one right just by picking a true answer, you had to choose the one that was the best fit for the situation. That's how the translation of Shadows feels; yes, the words are correct translations, but they're not usually the best translations. If you need an example of what I'm talking about, watch any Anime series dubbed into English; they're always correct but not the best. So, yes, I dig the product line, and am really happy about how they fulfilled their obligations to me and their other Kickers, but I wish they had used a better editor.

I write this post shortly after getting the news of the grave having been dug on the Kickstarter for the 25th Anniversary edition of HeroQuest, a legal debacle. Apparently, the company running the KS will move over to a Europe-centric crowd funding site where US legal BS won't apply, so Moon Design and Hasbro's trademarks won't matter. I thought that, rather than fixate on something that was breaking my gamer heart, it was time to discuss some of the real triumphs in crowdfunding for the role playing game industry. There are still good folks out there, and crowd funding isn't dead or filled with scammers just yet.
Kickstarter RuneQuest Shadows of Esteren