Sleestaks. Love 'em or hate 'em, they're part of the old school zeitgeist, whether it's out of straight up love for Sid & Marty Croft's creation, respect for the amount of traction that +Jeff Rients has gotten out of them over the years or the Sleestak Sunday posts that +Tim Shorts does every... now and again on Sunday. I, personally, love the green bastards, but I wasn't exactly sure how to (or whether to, other than that one night running DCC at GenCon this past year) include them in my games.

But then, it hit me:

Why do I need subterranean, reptilian humanoids of uninteresting ilk whose biggest claim to fame is that they, quite literally, stink up the joint? As part of my pogrom against the "genre D&D" elements in my campaigns, wouldn't I be better off if trogs go the way of orcs and goblins and just get chucked? I wasn't convinced at first, but when the revelation that if I dropped the troglodyte from my bestiary, I had a niche for the sleestak to fill, and my mind was made up. Stinking is out, hissing is in.

But seriously, a degenerate race of once-genius super-scientists and telepaths living in the ruins of their former civilizations, answering to the will of an also-telepathic Library of Skulls? That shit is some serious swords & sorcery metal right there.

And so, there are sleestaks beneath Ur-Hadad, on the shores of the Iron Coast and in the depths of Quasquetherion. Here's what they look like. 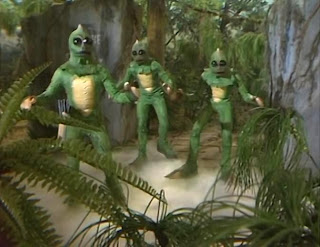 Hissing: Any intelligent creature facing off against sleestaks must make a save vs. Spells or become confused and disoriented, taking a -1 penalty to all attack throws, saving throws, proficiency throws and armor class for 1d6 rounds.

Sleestaks use all sorts of stone age weaponry, but are partial to strange slingshot-like crossbow that fires short metal bolts. Sleestaks attack at +1 with these crossbows, which do 1d8 points of damage.

Hissing: Any intelligent creature facing off against sleestaks must make a save vs. Spells or become confused and disoriented, taking a -1 penalty to attack rolls and saving throws, while opponents gain a +1 bonus to attack them for 1d6 rounds.

Sleestaks use these funky crossbows that look like slingshots but that shoot short metal bolts. They load very swiftly (and may be used for multiple attacks if the rules allow), but are relatively short-range weapons when compared to other crossbows (DMs: interpret this! I'm not writing rules for it!). Sleestaks attack with these crossbows at +1 due to familiarity with the weapons. These crossbows deal 1d8 points of damage in the hands of sleestaks, but 1d6 in the hands of others.
ACKS DCC Delving Deeper monster Monster Monday Quasquetherion