01 November
A little while ago, I announced that I'll be running a session of Delving Deeper for some new-to-old-school gamers (and a few new-to-tabletop gamers) using module B1: In Search of the Unknown, influenced heavily by +Ben Djarum's excellent Cytherion reskin of the module and dosed up severely with my own aesthetic (I hear that drinking OJ will prolong the sensation). The result of the blend between Quasqueton and Cytherion has become Quasquetherion, stronghold of the lost duo of adventurers, Harrowvar the Ironic and Zonn the Mind-Breaker. The adventurers disappeared a century ago, when they led a doomed army of damned souls and eldritch horrors against the barbarian tribes of the north. Huge thanks go out to Mr. Djarum, +Zach Howard (Zenopus himself), paleologos (Demos Sachlas) and everyone who contributed to the "In Search of the Unknown Campaign Sourcebook" found at Dragonsfoot. The map being used is the simplified one from the Campaign Sourcebook by Mike of Dragonsfoot and Arzon the Mighty, redrawn and funked up by y'all's truly. 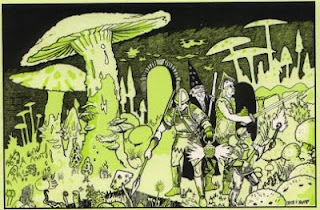 Before I delve into Quasquetherion, I'd like to take a moment to talk about my philosophy of how I plan to tackle this game. At first, I had thought to use Holmes rules or a Holmes retroclone (probably BLUEHOLME, but I'll bet you knew that already). For me, the Holmes rules are really a jumping-off point to get into OD&D, a way to get one's feet wet in the basics of D&D so that you can keep on rockin' it out with OD&D. I had thought about starting with BLUEHOLME and then moving on into 3LBB OD&D (plus Greyhawk if the group decided they wanted thieves), but there's two problems keeping me from doing so. The first is that I was looking for a system where the only dice a player would need is a d20 and some d6s; this meant that real Holmes systems were out because they use Greyhawk-style variable hit dice (yep, I'm getting that persnickety with the rules). The second is freaking thieves. I love thieves. We've talked about this before. I definitely believe that they enrich the game, despite the arguments that their existence creates a self-justification paradox, but the one issue I take with the way they're usually statted out revolves around the damn d%/d100 whatever you want to call it. Again, we've talked about this before. Furthermore, I'm not sure I want a "new-to-old-school" group to think of thieves as a necessity or use them as a crutch. At this point, I considered using Swords & Wizardry Whitebox since it doesn't include a thief, but I settled on the thief-friendly (but thief-optional) Delving Deeper, where thieves aren't needed nor do they use percentile dice (which puts them much more in line with Greyhawk thieves, when you get down to it). Oh yeah, with Delving Deeper, I also get my d20/d6 scheme as well. Victory!

As I settled in to prepare the game, I decided that I really wanted to reinforce the willingness of the players to "learn by doing," which, in my mind, means saying "yes" an awful lot more than saying "no," even if it's "yes, but." I want them looking for traps the fun way, sorting out how to get treasure out difficult-to-reach places using ingenious-if-harebrained schemes, all that sort of stuff. I want creativity, to engage folks looking at solving problems with their brains rather than their dice, and so I think I'll try to accomodate even the more ridiculous "can I?"s or "would it make sense to?"s.

Lo, adventurers, you stand on the precipice of legend! Here, you have found the mountain stronghold, known to the villages and towns of this country as Quasquetherion, home to the adventurers Zonn the Mind-Breaker and Harrowvar the Ironic. A century ago, Zonn and Harrowvar spent decades pillaging the tombs and stealing the treasures of this land, squirreling them away in this mountain citadel, fighting off all would-be thieves and conquerors. The duo's reign in Quasquetherion came to an end when they forged an army of misfits and the misbegotten to conquer the barbarian lands to the north. Harrowvar and Zonn never returned from their foray, but neither did word of their defeat. Thus, Quasquetherion was shunned for a time, then shunned, then passed out of memory and lost. Stories of the opportunist adventurers are still told, though often making them out to be more heroic than they likely were in reality, but the location of Quasquetherion was lost to time... until now.

Behold, adventurers, you stand before the once-forgotten entrance to Quasquetherion, open wide as if some gaping maw! As the hall beyond trails off into darkness, it resembles nothing so much as the throat of some colossal beast or even the living mountain itself. Here, treasures unclaimed for a century patiently wait to award your bravery and foolhardiness, as do whatever hazards or monstrosities that guard them. Prepare yourself as you see fit, adventurers, for ahead of you lie the mysteries and magics of lost Quasquetherion!

Each player rolls a d12 to get a rumor (ignore duplicates):


And yes, just to get this out of the way right now, Harrowvar and Zonn are both hipsters. If you'd figured that little bit out this far, you're doing pretty well. Here's the (poor) illustration I did of Zonn the Mind-Breaker I drew to demonstrate that fact.