The Kickstarter Post Where I Shill For Something I'm Excited About

15 October
I will not be talking about any miniatures in this post, don't worry.

Instead, I'll be talking about the current Kickstarter for an English translation of the Spanish retroclone Aventuras en La Marca del Este ("Adventures in the East Mark"). I'm not really sure how I became aware of the existence of Aventuras, but it was probably when I was searching far and wide for OSR-style systems, trying to parse out what features distinguish one from another. I was initially impressed by the art and cartography of the system, as well as the nostalgia factor of a red box (followed by a blue box... how classic!) being the initial release (I'm sure that some of you would have more nostalgia if the box were magenta, but this is my nostalgia, damnit! Get off my lawn!). Hmm. I'm intrigued Holocubierta Ediciones (is that "Holocube Editions?" Holocubes rock, plain and simple.), it's too damn bad I don't speak (or read) very much Spanish. Or rather, it was. Now, those Holocube guys have partnered with Extra-Dimensional Publishing to bring La Marca del Este to the English language and American market and I'll finally get to find out what's up with it.

Because it's on Kickstarter right now and $30 will get you a starter box. That's a damn value. You can see the list of all the stuff in the box over at the Kickstarter page, so I'll only draw your attention to the one detail that just continues to rock my world when I see it: you get a pencil. I love it when they include a pencil in a boxed set. Almost as much as a white crayon (one day, I'll write a post about how much the crayon in my Mentzer Red Box confused me).

Over on G+ today, I saw some skeptics wonder what sets ALME (because "Aventuras en La Marca del Este" is long to type) apart from the other BX retroclones (which is what it claims to be) other than pretty art. I thought this question was pretty vapid and that asking it without looking into the matter was quite lazy. Fuck you, you can read the Kickstarter page, too. Or read some of the few English-language reviews out there (there are some, I've read some of them, and they all seem to be pretty positive, not that I can find now). Here's the skinny: ALME was the house retroclone created by a blogger for his home game, his blog got popular enough that some sort of Holocube came from space (or maybe the future) and decided to publish it with killer art.

But the question remains, other than pretty art, why ALME?

(The following Wild, Groundless Suppositions are only vaguely researched and are more closely tied to my own impressions of the presentation of the work than any real information. Any information in them should be taken as the hair-brained wild guesses that they are, however convincing my argument is. Seriously, folks, don't take this too seriously.)

One of the things that we see get a lot of play on OSR blogs and in various BX retroclones are collections of unique character classes beyond the "core four" or "core four & demis" you see in BX. ACKS, for example, makes a big deal of its class design engine, and the very excellent Theorems & Thaumaturgy gives us a bunch of unique and interesting permutations on ye olde magic user. It seems like every OSR blog out there, at one time or another, comes up with a custom class for its home campaign at one time or another. It looks like ALME has done the same. Over on the Kickstarter page, they link to a write up of Explorer class from the book. The class is a well done, simple and elegant fighter variant similar to a ranger, but without a ton of pointless skills or other junk. Further, when the Green Box is described in "The Future Product Line," the fact that it includes "even more character choices" is mentioned (which I read to mean "choices to be made about your character" rather than "characters to choose from"). So, I'd expect more cool classes from ALME. 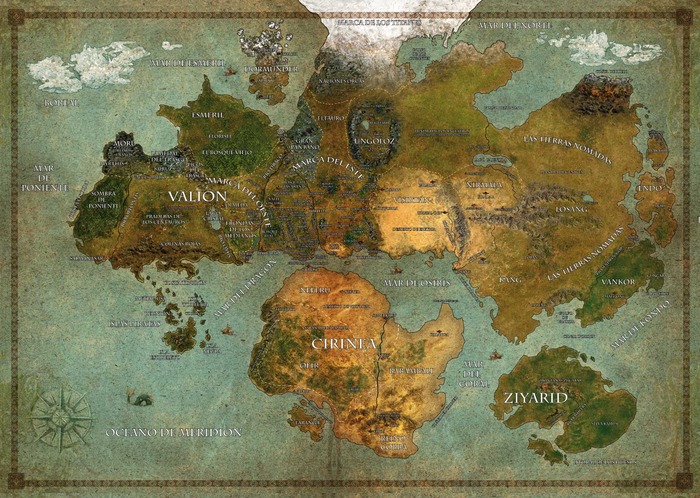 Look at that map. That's a sexy map. You probably can't tell from it, but the East Mark, far from being on the east of this map, is actually in the center of it. The map vaguely looks like the Known World (Mystara) setting, and preserves a few of its conventions (see that continent called "Zivarid?" That's a continent-sized Isle of Dread, I'm pretty sure.) and preserves the Known World flavor of "a whole bunch of real-world cultures at their peak smashed in together." For example, directly south of the East Mark is an Egypt-like place. I'm sure there are vikings in there somewhere, I just know it, and that yellow splotch off to the east of the East Mark looks an awful lot like a Ylraum-y desert that I'm sure is filled with fantasy Bedouin and oases. So yes, the map is not a direct copy, nor even a facsimile, but it feels like a love letter to the Known World, and what else could you expect out of a system that gave itself a Red Box?

There. I just made some stuff up about what I think that ALME has to offer. Maybe someone who knows what they're talking about will jump into the conversation. Oh, and in case you were wondering, yes, the art really is that awesome. Go check it out.