Passing On The Torch

09 October
I've mentioned before that a lot of my gaming is with folks who (a) have never gamed before, (b) haven't gamed in years, (c) never gamed much or (d) have never played an old school game and that many of my attitudes about beginners's gaming draw on that fact. Well, I'm been given yet another opportunity to teach some kids (well, they're kids to me) about old school gaming, since I've got a new crop of young coworkers who are into all the modern gaming stuff like 4e and Magic: the Gathering. My involvement with the kids started with a young lady whose boyfriend had been trying to get her into D&D, but was making the mistake of starting with 4e; 1/2 hr into character creation, she decided that she was done. When I suggested that they try a version with a lower degree of initial investment as a barrier to entry, I was kind of signing myself up to help out. And so, there's a group of young folks eager to learn the old ways and me, I'm left with trying to figure out how I want to make that happen.

At first, I was tempted to go with the good ol' standbys: Labyrinth Lord or B/X (I know, I know, they're one and the same). I thought about trying out OSRIC but the fiddly nature of 1e-style gaming just didn't jive with my goal of introducing new gamers to old schooliness (which is sort of ironic since 1e gaming is really the soul of OSR gaming; for me, if I ever run a 1e game, it'll be more of a kitchen sink-style "1e for 1e's sake" game, probably for players who never played 1e). DCC seemed like a solid option, and the funnel seemed like a great place to start, but I'm slightly worried about the concept of running multiple PCs and I don't want folks to get discouraged by the "disposable" nature of DCC 0s. This leaves me with Swords & Wizardry, and I was leaning toward Whitebox, or some other sort of LBB clone, when I made my decision: We'll be playing Delving Deeper. 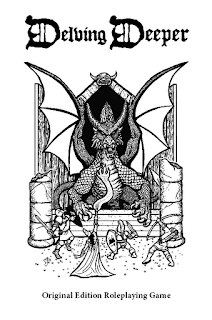 My primary reasons for choosing Delving Deeper work like this: 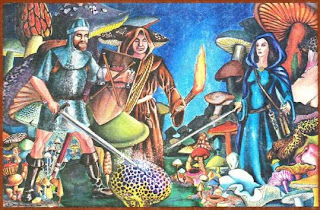 I thought I'd trot out an old favorite and use B2: Keep On The Borderlands, particularly since it teaches so many adventuring lessons so well. But then, Mr. +Ben Djarum wrote the most amazing series of posts on B1: In Search of the Unknown and completely changed my mind. I've never actually played B1 and always thought that the introductory nature of it for DMs was a little flat. Ben got me interested, however, and I started looking more closely at the module. The great thing about B1 is that it introduces a lot of concepts of dungeon exploration not only to the DM but also the players, especially old school concepts. There are lots of things to play with, decisions to make, pools to drink from, chances to take, tunnels to get lost in, levers to pull, and all that stuff that's the sort of thing we're talking about when we say "player agency." You are free to choose between life and death, danger and safety, glory or not. We've got to get to these kids early on before they fall into the pit of railroaded plots and DM-as-narrator crap, and B1 is a great way to do it!

Since the session will be aimed at new players (not merely new-to-OSR players) and might only be one session ever, I'm not stressing out over the idea that running a specific module and starting at the beginning of it rather than allowing the players to chart their PCs' own course through a sandbox just might be railroading. Instead, I'm viewing it more like the dungeon itself is the sandbox, which is what the original intent of the module seems to be. Now, because there are some tropes that I just can't stand in old Genre D&D, like orcs and goblins and kobolds (oh my!) being your chief enemies on level, I'll be switching stuff up more than a little bit. I love Mr. Djarum's wandering monsters for B1 and will probably be using something very close. Stocking the rooms will be less about rolling up specific encounters but more of rolling up types of encounters and then figuring out which monsters I want to use to fit that bill, however fun it is to leave it all to chance. I'll definitely be reinterpreting some monsters to suit my needs as well (forget troglodytes, it's time for sleestaks!).

If you've been following along with Dispatches for awhile, you're probably aware that there's no way that I'll be able to just say "We're playing Delving Deeper" and leave it at that without any house rules or anything. That is not how the Adam do. And yes, I'll have to tinker with B1 quite a bit to make it reflect my personal gaming aesthetic (while not letting it get too weird for newbies). I'll definitely need to rewrite the background info for B1, as well as the players' info (I love what Ben did with his interpretation and, while mine won't ever be the same as his, he definitely inspired where mine is going to go). There are a bunch of details to hash out, but nothing that can't be managed quickly. I sort of feel like it's my job to provide these kids not just with an "ultimate dungeon funhouse playground sandbox" but also one that hips them to my personal brand of gaming aesthetic, which is kind of like telling me "your job is be as awesome as you can be and make sure that other people get it." For some people, that'd be pressure, for me, it's the right kind of challenge.
B1 Delving Deeper