29 September
Normally, Stupid Dice Tricks are for Friday, but this past Friday I got more than a little busy and couldn't finish up this post. Here it (finally) is: part one of a narrative effort to design a game system around a particular set of really cool dice I bought at GenCon.

Today's Stupid Dice Tricks exists less so that I can teach you a new stupid dice trick or to get something down in writing that I've been kicking around for awhile so that the rest of the blogosphere can read about it. Instead, today's Stupid Dice Tricks is about building a game system around some dice that I happen to have lying around that I think are awfully neat. With these dice, we're going to build a game system (or perhaps reinvent the wheel if it looks just like some other game that already exists). Here they are: 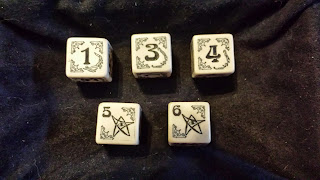 As you may be aware, these are Q Workshop's very cool d6-style dice made for FFG's Arkham Horror tabletop game. Before we get into doing anything with them, let me first talk about why I think these dice are cool. Yes, Q Workshop dice can be a little expensive (at $10 for this pack of 5, they were $2 each), but they are damn sexy, aren't they? They're a standard, larger-sized d6 in a simple bone or ivory color that contrasts well with the black ink, making them very easy to read. The numbering is all in a very cool Art Deco-style font that is large and easy-to-read for numbers "1" through "4," with some cool decorative fiddly bits all around the sides. Facets "5" and "6," however, aren't as clear to read with the numbers being significantly smaller, but there is a prominent Elder Sign on each of those faces that looks really cool. It's that Elder Sign that's going to drive the design choices we're going to make with our imaginary future game that we should have at the end of this post.

At this point, I'd like to say that I have never played Arkham Horror and am not familiar with the rules. If you're a fan of AH, please don't think I'm a terrible person. I've always wanted to give it a shot, it's just never worked out for me. However, I do have dice designed for that game (because they're snazzy) and I assume that the game's design also informs the design of the dice (which may be false), so I further assume that there's a nice in-game reason to have the Elder Sign on the "5" and "6," but I'm not going to worry about things I don't know for sure any more than I have to. Right. Done with that. Moving on.

So, let's assume that our new game system - because that's what we're doing, making a new game system based on these awesome dice - counts as a success any roll of "5" or "6." That way, it's easy to read and count successes. Every Elder Sign you see is a success. The math isn't as easy, but it's not ridicu-hard. The number of dice assigned to resolution rolls will, however, have a strong amount of influence on the chances of success.

In my second aside of the evening, I'd like to point out that I can't quite figure out how to finagle AnyDice.com to help me graph this stuff out yet. I'd like to be able to show success distributions and all that fun stuff, and I'd really like its help with determining how likely different numbers of successes are with different amounts of dice, but I'm afraid that I'm just going to have to spreadsheet all that stuff. Sorry folks, I just don't get some of the AnyDice.com programming jive.

So, for this system, let's assume two things: (a) that rolls of "5" or "6" count as successes and that (b) you get to roll a number of d6's (a dice pool) depending on how good you are at a thing; the better you are, the more dice. Let's also put a hard cap on the number of dice you can roll at 5 because (a) that's how many Arkham Horror dice I have and (b) the probability of not rolling a "5" or "6" with 5 dice is pretty darn small and I can't imagine really needing to make that chance even smaller. If we're counting successes and multiple successes are possible, then the system we end up with should reflect that. I'm not too keen on multiple successes being required to accomplish a task, but rather to describe how the success occurs.

Using the basic assumptions we've made thus far we can predict that:


Well, that's the probabilistic basis for a game system. Next time, we'll look at how to use this framework to create a gameable system.
Dungeon Mastering funky dice