09 August
Yep, I know it's August. And fairly well into August by the time I post this. However, I've been making myself talk about the gaming I've been doing every month so far this year, so here's the July details.

Yup, I didn't play anything new at all. I had the opportunity to when I went to MichiCon (sort of; I'd have had to be there longer than I was to get more gaming in), but I didn't take it. I'm sure I was invited to new and interesting games on G+ that I didn't partake in. (I'm also sure I was invited to uninteresting ones, but that's neither here nor there.) At this point, I didn't really feel like playing in anything new, either, but a lot of that has to do with June's revelation that I am happier DMing than playing, which makes playing in too many different systems fairly impossible: if I don't run it, I don't play it. For right now, at least, but I'm sure that's subject to change.

The Iron Coast ACKS campaign has been chugging along when we get to play, which isn't as often as I'd like. If only the Tap Room would get rid of its trivia night, then I could take over the bar for the game and things could be dependable. So, Ypsilanti-based citizens of Kickassistan, let's get that accomplished, shall we? I promise that if the Tap Room decides to kill its trivia night (they have a serious douchebag doing the trivia, so it's not much of a loss), I will host a game there (nearly) every Sunday night for two months and try to get others to host stuff there, too. So, let's sabotage some trivia!

Moving right along, the Iron Coast campaign has been picking up in fun-factor lately. We've had a rotating cast of characters, which works surprisingly well in dungeons when the players establish a "base camp" of sorts. Thankfully, the Licheway has a natural base camp in the subterranean docks found there; so far, absent players' characters have guarded the party's boat, kept salvaged treasures safe and even tended to rescued NPCs' wounds. We managed two sessions in July (well, the last one was in August, but who's counting?), and a few PCs have now leveled up (+Paul Linkowski's thief might be rounding 3rd if carousing goes well for him). The team got a little distracted from their goal by a dungeon boss, but now with that boss defeated, they can move on to their original goal in the Licheway: finding the long last treasure of the sandlanders. I'll talk some more about this later on, after the party has finished off the dungeon, because the way the Sorceress was implemented in the Licheway is really damn smart the more I think about it. So, yeah, some folks are level 2 now and the whole group is looking to blow massive amounts of treasure in Port Scourge.

Other Stuff I'm Working On

In the Shadow of the Black Giant still hasn't happened yet, which kind of bums me out. Some few things have conspired against me running it (primarily folks not being available), so that's been rough. My Swords & Wizardry Ur-Hadad game has been doing well, and the players are rounding third on the plot that they largely inspired. This game is mostly improvisational and focused on the narrative, so it might be better served by a system like Dungeon World (maybe not, I don't know), but S&W has been working really well, especially when I remember that swinginess is for dice rolls, not ability score bonuses. When I start looking closely at the nuts & bolts of S&W, I feel myself wanting something even simpler and so... I'm afraid I'm about to start hacking S&W Core into something very specific.

DCC hasn't been getting a lot of love around here, but a lot of that is because I'm working on a super-secret project that +Edgar Johnson and I will be announcing soon (I'm thinking after Gen Con, what do you think, Edgar?). I've been feeling the pull back to DCC from the lure of other games, particularly since it hits my "this is how things should be" buttons terribly well. For such a simple system (which, say what you will about the kickass tables, is exactly what DCC is), it feels like there's always something new to learn about or to figure out how to do using the systems as-written. I know I might be preaching to the choir a bit here, but I feel like the DCC community has only begun to scratch the surface of what DCC can (and even should) be used to do. Things like +Daniel Bishop & +Purple Duck Games's Campaign Elements series have demonstrated that Dungeon Crawl Classics isn't just for dungeons anymore and that DCC is a wider aesthetic than we've seen thus far. Really, it's quite inspiring. 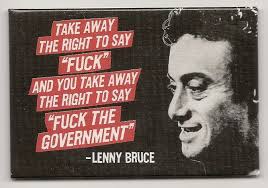 Lenny Bruce once said "No artform ever attracts an opposite." It might not surprise anyone out there that a guy who spent so much of his career offending people understood that if people weren't interested in what he was doing, no one would come out to see him and that the people who were offended and walked out of his shows weren't going to come around and decide they liked what he was doing. It really shouldn't surprise any Dispatches readers that this same sort of logic applies to games. There's nothing wrong with offending people, even deliberately. As +James Desborough pointed out in a recent article, offense is the price we pay for freedom of speech. Even in games. I don't think there's a gamer out there who thinks that more choice in games is a bad thing, and if some of those games offend you as a reader, as a gamer, remember what Uncle Lenny said: "No artform ever attracts an opposite." It's okay that you don't like it. It's also okay that other people do. Settle the fuck down.

I remember living through the Satanic Panic of the 80's & 90's and how much damage kowtowing to the "moral majority" did to the gaming industry in terms of the breadth of content available. I'm sure that most of you out there in Kickassistan remember it as well. If we allow the same sort of morality police-style censorship to invade the hobby again -- even if it comes from within the hobby itself -- we'll all be the poorer for it. Keep the games industry weird, people, keep it strange. The cornerstone of our hobby is imagination and it feels to me like if you're the sort of person who has to tell other people how to use theirs, you're missing the point of having one yourself.
#MiG ACKS DCC Iron Coast SnW