Is It #7RPGs Time Again Already?

13 July
So, the other day, I thought to myself, "Adam, if you're hurting for content (which it sometimes feels like you are), you could always write another list of #7RPGs." It was to my surprise that I got on G+ last night after my awesome Con-sperience to discover that some folks had beaten me to it. Yesterday and this morning, it seemed to be the same old "#7RPGs I've Run" sorts of lists, but just now "#7RPGs I'd Like To Play (not run)" just hit the Plusosphere. Now, my list may surprise some of you, particularly folks who identify me as one of those OSR guys. I'm only half an OSR guy, really, and I'd never turn down a game system just because it quacked like a story game.

#7RPGs I'd Like To Play (in no particular order)

I've previously mentioned that I've played TOON! before, but it was only twice. Once when I was in Middle School, one of my fellow geeks ran it at lunch time (we used to game every day at lunch time, it seemed) and once at a micro-Con (held in a house by +Jeff Winokur), +Christopher Smith ran something that I don't really remember. I remember fun, but I was probably really drunk, so I don't remember much else. But, given (a) what I remember and (b) the way everyone raves about it, I'd love to give TOON! a (third) (sober) (adult) chance.

I've also never played RuneQuest. I'd love to run in an RQ game run by someone who knows Glorantha in and out (and who doesn't expect the players to, as well). I know this one guy who, whenever the subject of rpgs comes up, he just starts talking about how bad ass RQ is; guys who are as zealous about games as he is keep me from ever gaming with them, you know? 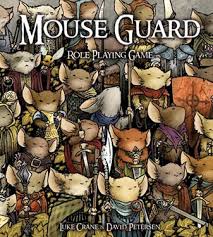 I know that BW/MG/TB get a lot of bad press in the OSR community, much of it of the "wtf?" variety. And yet, I have a bunch of friends who swear by the stuff. Well, okay, one friend. I'd like to try playing one of these games once with a GM who knows what they're doing and players who know how to accommodate players who don't understand the "wtf?"-ness of the system. The same goes for Dungeon World/Apocalypse World.

Tunnels & Trolls was one of those things that I didn't know anything about when I was a kid, other than the fact that it was out there. I didn't know anyone who played it or anything about it, I just saw it in the gaming catalogs and passed it over. Coming back to old school gaming as an adult, however, I understand the place that T&T has in the history of gaming and the evolution of the hobby and I'd like to see how it plays.

Somehow, despite always being a fan of the entire White Dwarf/Warhammer aesthetic, I've never actually managed to play WFRP. I'd love to fix this with 1e at some point.
#7RPGs