20 June
At least once every summer, my wife and I take the middle of a week off and drive from our hiome in downtown Ypsilanti, MI, out to my folks' home-in-which-they've-retired (yout don't say "retirement home" in their presence) in South Haven, Michigan. For those (few) of you familiar with the geography of the great state of Michigan, you can begin your seethes of jealousy. For those (substantially more) of you who only know that "Michigan is the one that looks like a hand, right?", South Haven sits on the Michigan side of Lake Michigan, which is the biggest of the Great Lakes and yes, it is (as we Michiganders like to say) America's High Five.

One of the neat things about small towns, and I'd suspect that it's true wherever you are too and that it's not unique to Michigan, are the preponderances of used book stores and antiques shops that spring up, almost as if, knowing well and good that grandson Jimmy will be moving off to the Big City one day and won't be around to mind the farm, these places spring up to sell off forgotten estates to each other one piece of junk at a time. Or, in my case, one book at a time. Normally, I make out pretty well on these vacations. My wife and mother look at the sorts of things that intrigue them and I pour over every book I can get my hands on, in search of the good stuff. Well, this year, I hit gold. 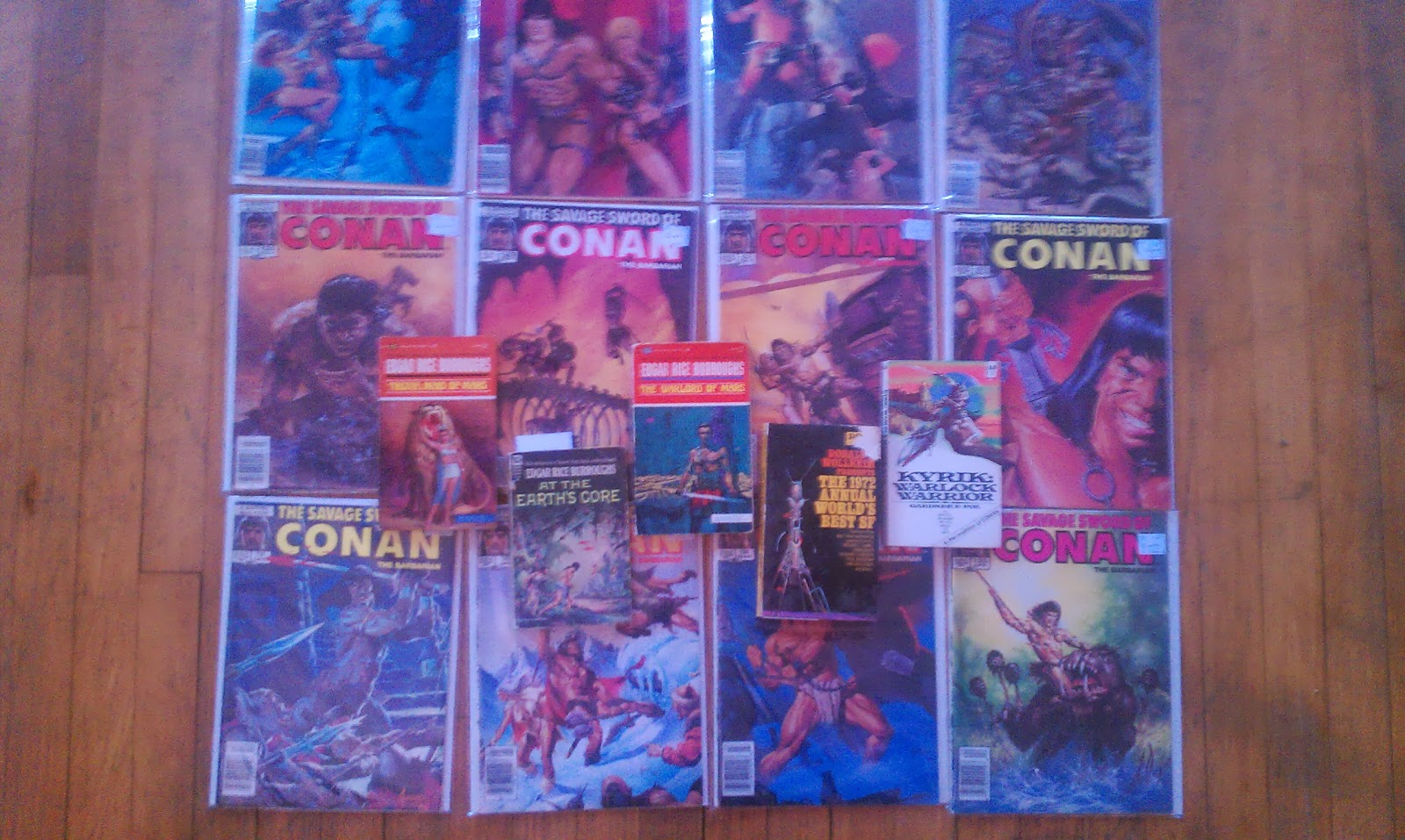 That's 12 issues of Savage Sword of Conan (mostly non-consecutive, but with a few runs in there) from the early-mid 80's (1983-5), Warlords of Mars, Thuvia of Mars, At The Earth's Core (all of those by ER Burroughs, a name not used nearly enough on this blog), Kyrik: Warrior Warlock (by the incomparable Gardner F. Fox; you might know Mr. Fox for his other work for DC Comics like GREEN FUCKING LANTERN!) and The 1972 Annual World's Best SF. Holy poop is this stuff good.

I'm sure you get the Conan stuff. It's damn good. Lots of Ernie Chung, lots of Jusko covers. That's what gets you in the door, I get it. It's the novels you're here to see, though, right? Here's a closer look: 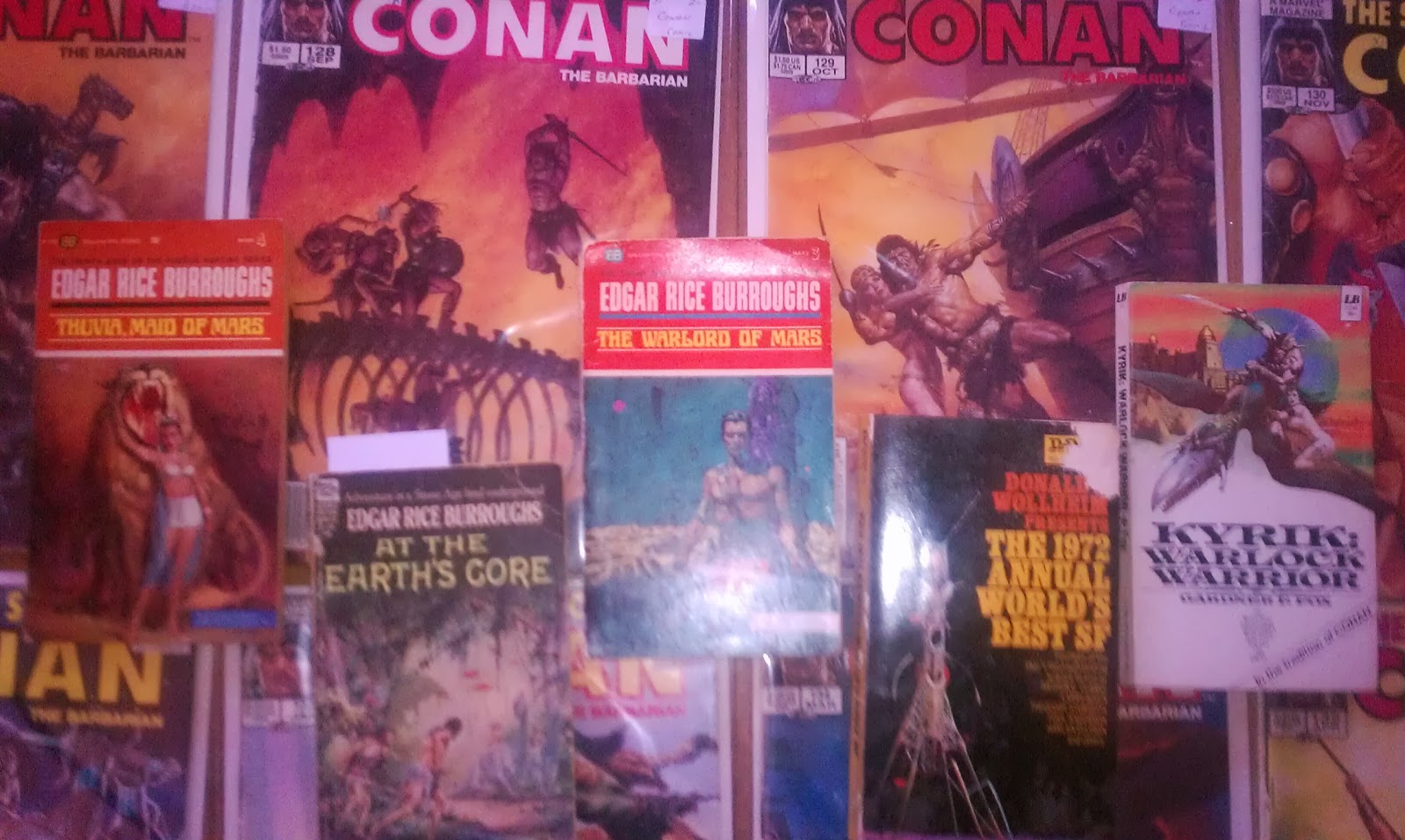 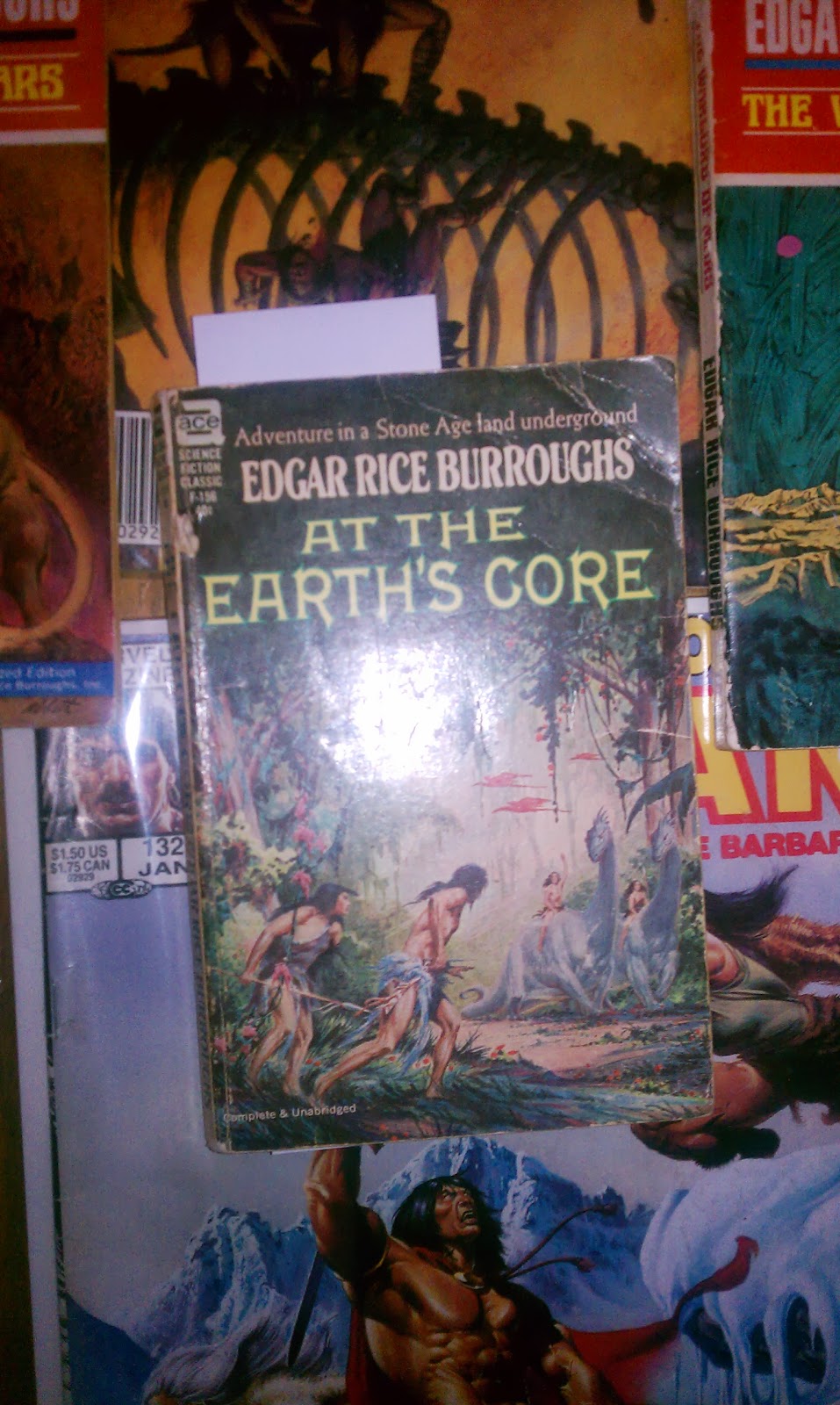 The ERB stuff first: I've read most of the Mars stuff, and was stunned to discover these early but good-condition Of Mars paperbacks. There's no dates attached that I can discern, but the layouts and covers make me want to say 60's. For the uninitiated, The Warlord of Mars and Thuvia of Mars are volumes three and four of the Of Mars series, following hot on the heels of Gods of Mars, volume two (where my current re-read of the series is stalled out, somehow, despite it being one of my favorite volumes). At The Earth's Core was a personal coup for me, particularly because I've never actually seen it in print and the size of the volume suggests a very early printing (I'd say late 40's, early 50's if the other similar paperbacks I have are any indication, which they might not be; the art and layout also seem to be from that era, look at that logo!). Being the first book in Burroughs's Pellucidar series - a series I've never actually read - this is the ERB acquisition I was most excited about. 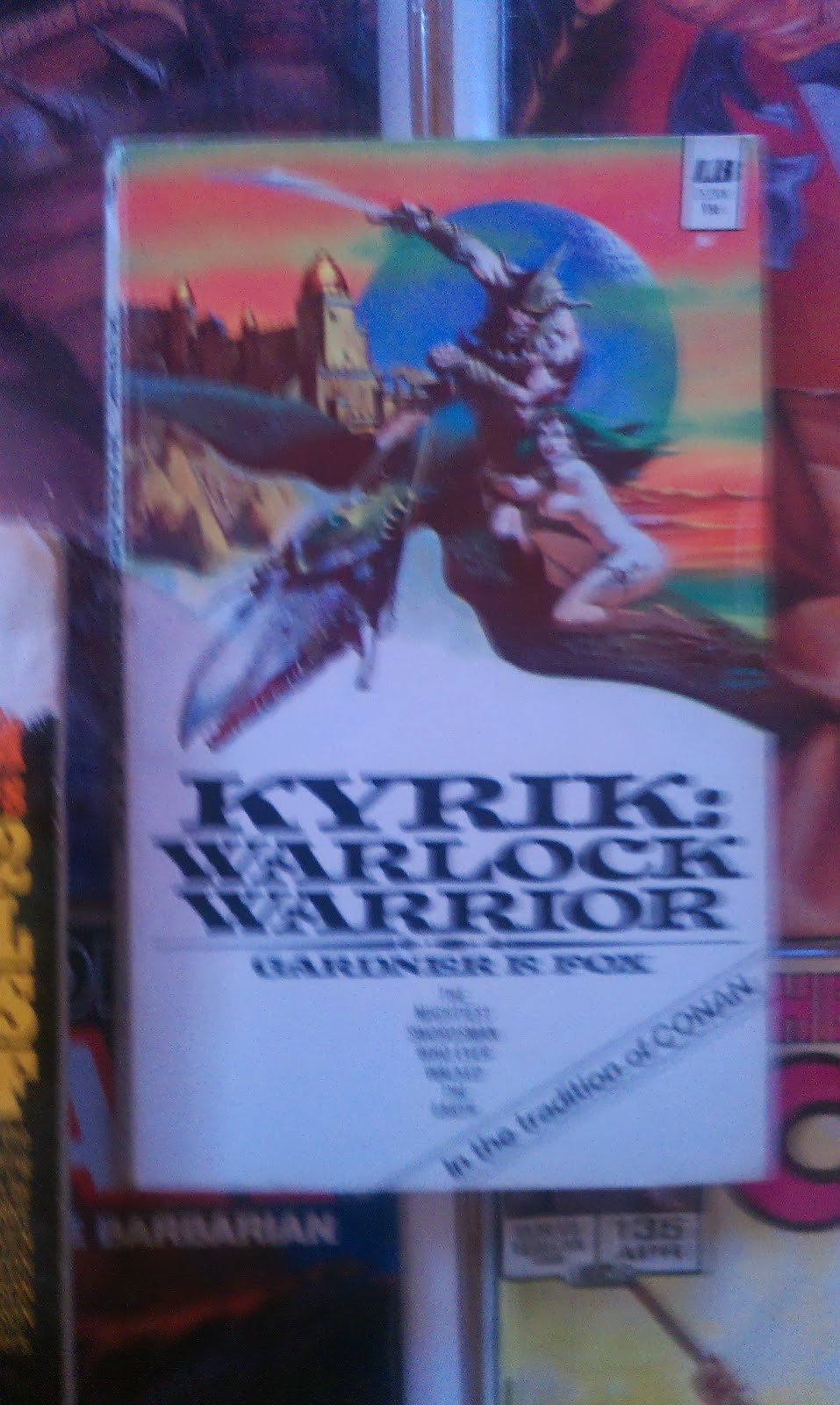 I might be alone in my love of Gardner F. Fox and what I see as his substantial contributions to the sword & sorcery genre. I don't know. Maybe I'm not. I just don't see a lot of folks bandying his name about talking about how dope his stories are. The novel that got me turned on to Fox was his Kothar and the Wizard Slayer, featuring his cursed barbarian wanderer, Kothar. Kyrik: Warlock Warrior, go figure, features his character Kyrik. Guess what he is? A warrior? A warlock? Naw, son, he's a Warlock Warrior! Well sign me up, Mr. Fox, I'm here for the ride. Seriously though, Fox is an Appendix N author. He's in there. He's not an Appendix N author that I see get a lot of praise though, so here goes: I really like Gardner F. Fox. He does swords & sorcery well and I think you should pay closer attention to him. Yes, sometimes his stuff comes out like Conan and Elric had a baby inside of a wizard bong, but that's shit I'd pay to see.

The last addition to my vacation haul was one of those things that, if I hadn't been primed and ready for it, I might have skipped. After all, who likes anthologies? Turns out I do, but I keep forgetting that fact. The cover here is in shitty shape, but I'm not going to let that slow me down. Cover space here goes to no less than: Arthur C. Clarke, Larry Niven, Poul Anderson and Harlan Ellison. The Table of Contents also turns up Alan Dean Foster. Right now, thanks to Man of Steel, I'm really going through a hard "sword & planet meets hard sci fi" period right now, where I really want to run Traveller (I think this happens every summer, for some reason) but I really want to do it more like DUNE and Of Mars. I realize that none of that has anything to do with these Silver Age sci fi greats, other than the Traveller part. Meh, maybe I'd do straight Traveller, who knows?

And so, there was my vacation haul. It's going to be a while for me to get through them all, but I have no fear that I'll manage. I've already started At the Earth's Core, but I think that a few shorts from 1972 are in order before I delve headfirst into Kyrik.
Appendix N Traveller