This month, the Iron Coast crew finally met up and made our first round of characters (first session) and then set out on their first adventure from the pirate fortress, Port Scourge. The initial troupe was +Andy Block, +Mark Donkers & +Matt Woodard, but +Paul Linkowski joined us for session two. I had the guys build characters using the "roll 5, develop 3, keep 1" method suggested in the ACKS core book and some really interesting things emerged. First, Matt decided that all his guys were going to be vikings and thus, they became Iskurlanders. Matt gladly "bites the cleric bullet" but, rather than be the guy who hangs in the back until healing is needed (which doesn't really work in BX/ACKS), his Iskurlandik cleric had an 18 Strength, a big axe and was the group's heaviest hitter. Mark's characters included a dwarven machinist and a warlock, but he went with an elven spellsword and, building upon my interpretation of elves in the world of Ore as being Atlantean/Melnibonean sorcerer/scientist/soldiers from another dimension and decided that his spellsword was a would-be conqueror looking to carve out a kingdom of elves on the Iron Coast. Andy, being new to gaming, made up a lot of stuff as he went along (which he did really well) and ended up playing an elven courtier who believes in the cause that Mark's spellsword is championing. Paul rounded out the team with the group's only thief, an artist who is happier to draw his companions' daring-do than to participate in it. 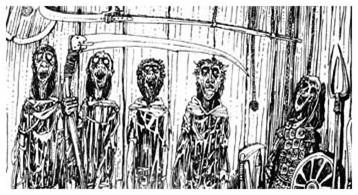 For the first adventure, I rolled out a classic and am sending them up against the Licheway from White Dwarf #10. Although they reached the purported location of the dungeon around noon on the first day of their expedition, they decided to camp for a night so they would have a full day to investigate. I suspect this might have been slightly metagame-y, what with "spells per day" being spells per, well you know, day, but I was happy to oblige them with hourly wandering monster checks. All went well until the very last hour of the very last watch, when the brutish viking cleric saw some sort of huge lizardy something coming over a hill to the east. This was one of those fights where the only thing that saved them was the fact that I rolled a maximum possible encounter distance, because it ended up being a basilisk. Yup. They pin cushioned the charging basilisk with arrow after arrow so that, when the time came and the viking cleric was ready to charge, he got one last hit in before the beast went down and only he had to make a saving throw and only once. Threat down, they had some breakfast and went down into the dungeon. They didn't get very far before the cleric took a hit from a giant lamprey (he had suffered exactly 1 hp of damage from the basilisk - I rolled minimum damage of all friggin' things - and 2 hp from the lamprey out his maximum 6) and decided it was time to go home with the few treasures they'd found so far. Now, rearmed with reinforcements (as +Jeff Cambers & +Scott Cambers join the crew tomorrow) from Port Scourge (and probably some new hirelings, along with Andy's newly-levelled Siccalian 1st-level fighter henchman, Eusebios), the crew will be returning to the Licheway through the secret sea cave entrance at the next low tide. This will be happening about the time this blog post goes live.

I just plain don't enjoy game systems based on Tolkein stuff. While I have to re-read Tolkein periodically like any good geek, I just don't like the legacy that Tolkein's work has left on fantasy. I hate elf fanboys. I dislike hobbits. I'm not at all interested in playing in this setting. But, I let myself get talked into it because, if nothing else, it's a new system I've never played before. The down side of that fact is that TOR rewards folks who know what they're doing, which definitely wasn't me at first. Even by the time I knew what I was doing, I didn't dig how my own player agency could easily be undermined by other players, but I'm sure a lot of that had to do with the folks I was playing with. I felt like the game was rewarding egos and egoistic playing and that's something I just don't enjoy so, go figure, I didn't like a game based on a setting I don't like. Yup, not playing that again.

So, the FLAILSNAILS of Ur-Hadad group (which has expanded) has now foiled the Bloody Successors' plot to acquire the fronds of the blue chrysanthemum (the telepaphrodesiac from the first FSUH session), killed one of the terrorists who had taught the assassin's they'd foiled earlier, acquired a series rugs that contained a terrible secret and had that secret decoded by Master Guang-Yuan Jo. Turns out that the rugs, when compared against each other, gave every attack the Successors were planning, culminating in something huge. Trying to prevent an assassination, the crew interrupted the season-opening performance of a famed Hadadi opera company, murdering two actors (in a confetti-strewn scene that will go down in my personal gaming history) and completely failing to stop the assassination of the Grand Vizier's brother by none other than the Shoveler himself! After a brief scuffle, the Shoveler got away, as did the party's actor-murderers, but four Successors were brought to justice (arrested and not killed!), so the bounty hunting business is going well. The party has been following leads that have led them to a dockside cult (which almost led to violence, but it was narrowly avoided) and to prepare for the next attack, which would be against The Grand Circus, a famous chariot race in the Lucrewarren. The players did a great job of uncovering the Successor's plot and now are primed to put the kibosh on the whole thing. We'll find out on Monday how successful the team is. Oh, and this scene came very close to happening:

Next month, I'll have my first experience in DMing at a Con. As I reported a few weeks back (I think), I'll be running sections of DCC at MichiCon, one on Friday, 7/12 and a second on Saturday, 7/13. I'm hoping these events fill up, but I'm the only person running DCC events and, as far as I can tell, the only person running OSR-style events at all. So... yeah. I'm hoping for awesome and banking on okay. Even if the experience sucks, I'm heading to the Detroit Tigers game the next day with the folks from the Tap Room (and several of my Iron Coast players), so I'll have a blast at least one day of the weekend.

In July, I should also be getting In the Shadow of the Black Giant underway, which you already have heard me talk about a lot lately, so I won't say anymore. Stay tuned to the blog and let me know if you're interested.

Finally, I'm realizing a lot lately that I'm a lot happier DMing than playing. I don't like being at the mercy of my fellow players and a sympathetic DM. I think I'm just happier when I'm the guy driving, mostly because it seems that too often, other players and I just aren't on the same page. This really ate me up recently, chewed me up and spit me out, and has made me reevaluate my personal gaming priorities.