First Impressions of T5: The Day That Traveller Made Me Cry

26 June
Yesterday, my copy of Traveller5 showed up.

I had been itching for T5 for awhile now, my brain threatening to rattle off some new sci fi space setting at any given moment. It was a pressure cooker in there about to explode. The only thing that could have let off on the pressure was either actually running some sort of hard sci-fi yet vaguely sword & planet something or Traveller5 showing up. Thankfully for my already-over-extended gaming schedule, T5 showed up first. 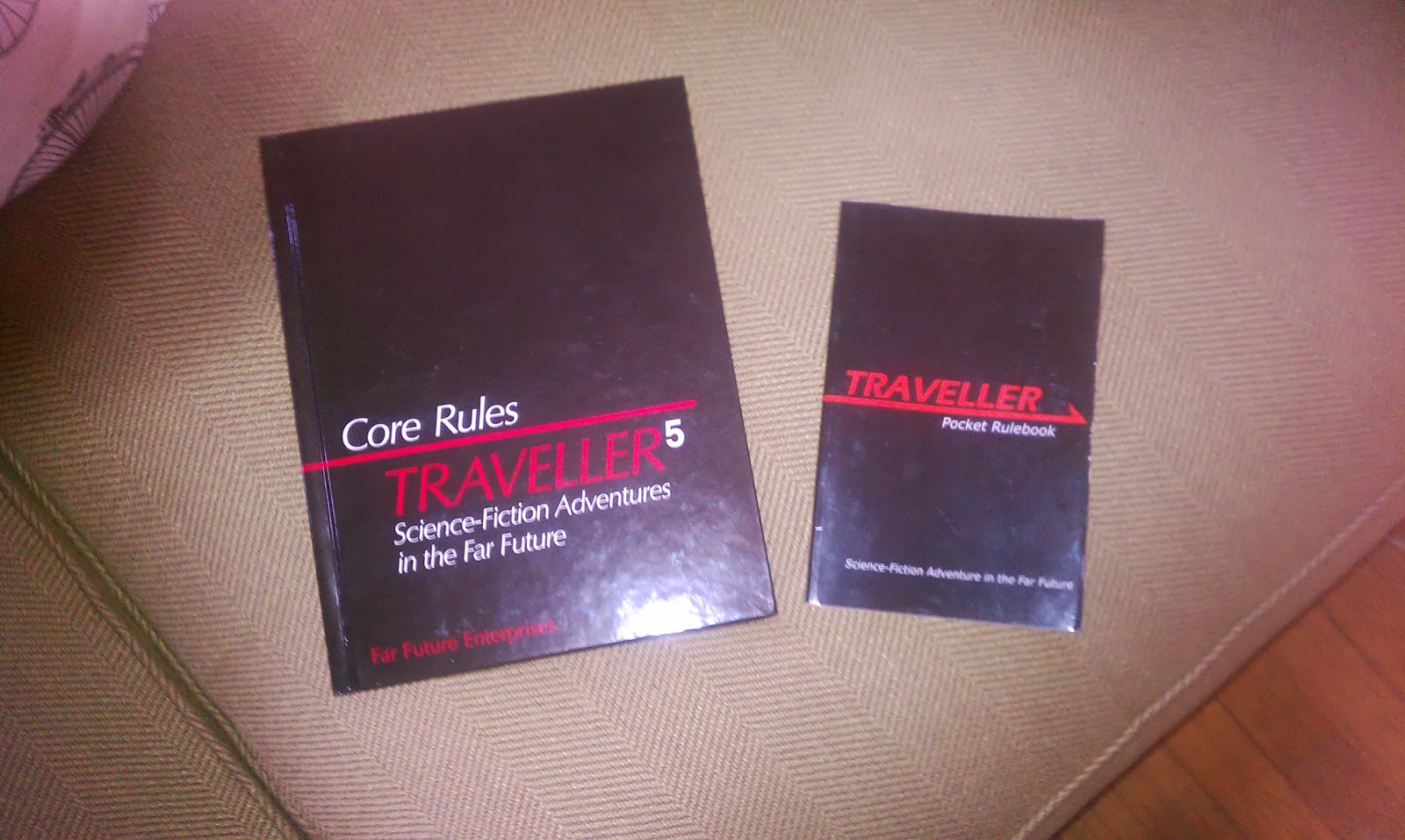 On the left you have the colossal 656-page textbook that is T5. A huge and unwieldy thing, I assume the designers behind it had designed it primarily to act as a weapon should the bearer get attacked by rampaging athletes or rabid biblethumpers or something. (For reference, my Mongoose "pocket" edition is on the right, which is way too large for any pockets I own.) Here's a closer look. 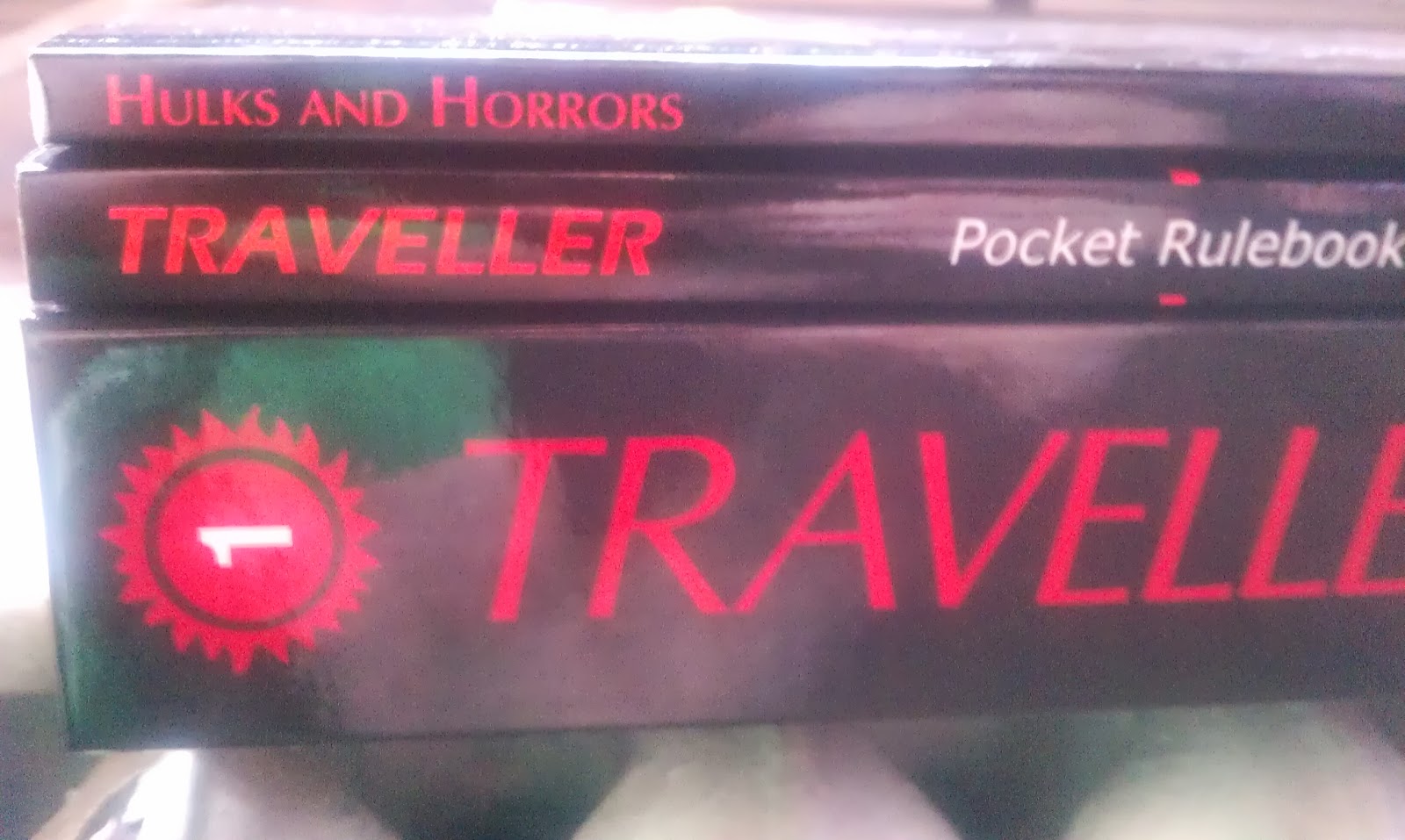 Again, MGT Pocket included for reference, but I've also added Hulks & Horrors for comparison. Please note the comparative sizes of each spine. In descending order, we have (a) nice & slim, (b) slim enough to still have a robust system and (c) BACK-BREAKINGLY HUGETARDED.

I know that many gamers out there may look at the size of T5 - particularly when compared to the price tag - and say "well, of course it's huge! That's how +Marc Miller shows us value! It's the kitchen sink approach to game design!"

That quote kept coming back to me as I scoured through T5's pages. Too much, too poorly explained, too few examples and too confusing. It's at the point where I started to get completely exasperated and came within moments of tears of rage and frustration that the following occurred to me. 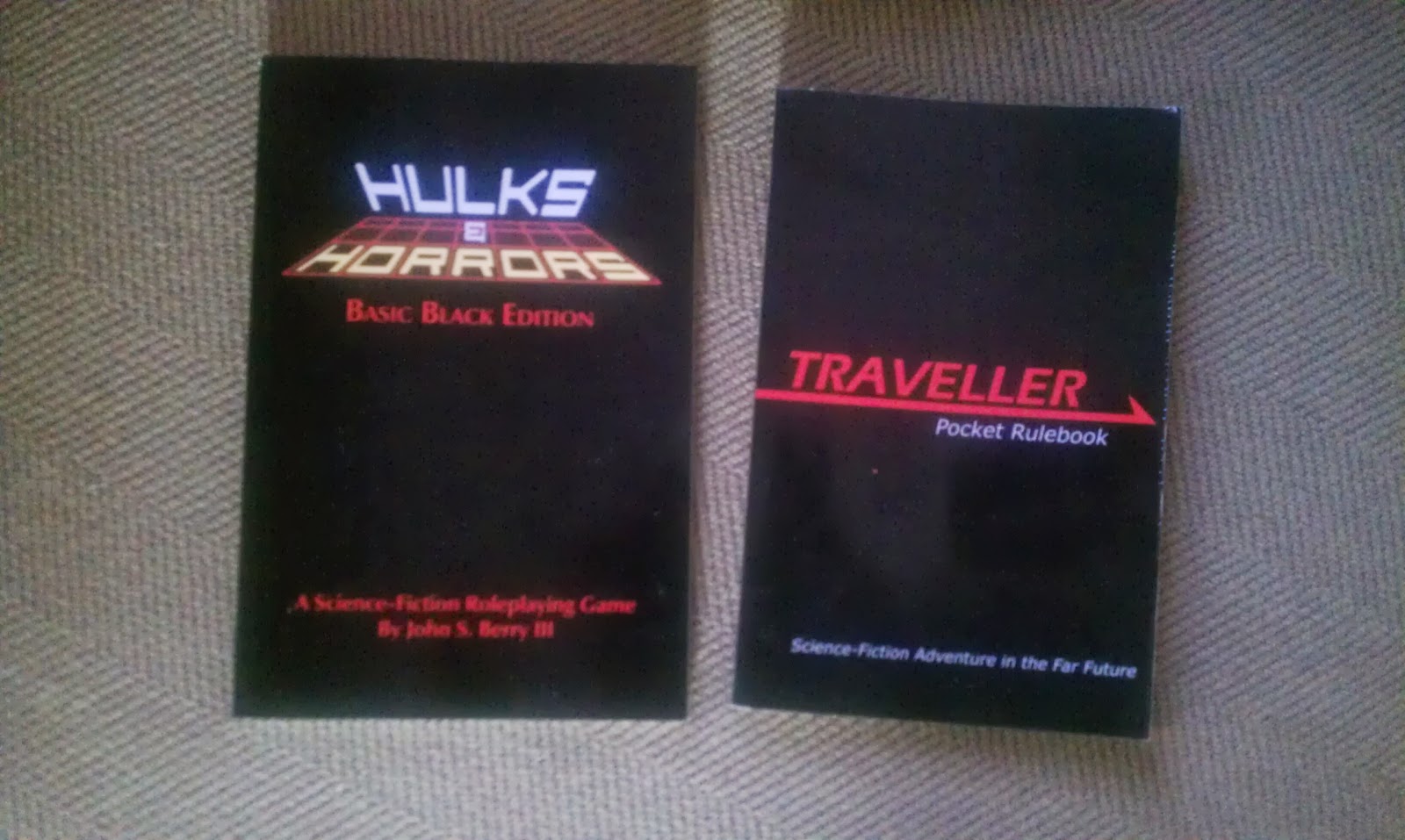 Look at that sexy Hulks & Horrors digest-sized game book right there. That sure is a sexy-looking book. It's like some sort of 80's-style cross between Traveller and those 80's sci fi movies that used dramatically-angled titles. Ooh, it looks like it belongs in one of the arcades of my youth, it does. And what's that you say? It's built upon a foundation of familiar rules that make sense and add flavor while still staying true to a vaguely-sword & planet sort of sci fi? Sure, it ain't hard sci fi, but can you really have everything you want?

If anything, Marc Miller's new T5 has taught me that trying to get everything you want in a single book makes that book unusable. T5 is a doorstop. That's about it.

If he'd actually wanted T5 to be successful, Miller should have looked at how to expand his player base, even if expanding it back into the folks who used to play Traveller back in the day. You don't expand your player base by making the rules more labyrinthine. To quote +Chuck Thorin from an unrelated thread on G+ yesterday (we were talking about Arduin): "Reading a rule book shouldn't be like a hex crawl." As +Edgar Johnson can attest, I really freak out when rules aren't intuitive and I have to have someone explain them to me. I was so angry and crestfallen when I realized yesterday that, as written, there's no way I can ever play T5 that I've spent all night bitching about it to the folks who'll bother to listen. (Sorry, +Edgar Johnson, +Ray Case, +Jason Hobbs & +Gabriel Perez Gallardi.) Miller missed the fact that the bulk of his present-day potential market is the growing OSR scene, many of the participants in which have fond memories of a simple, straightforward Traveller that got crunchy in all the right places but stayed flexible enough to handle whatever the Referee could come up with.

So, how should Miler have designed T5? How could it have appealed to the largest possible audience? LBBs. I think every gamer out there who has ever played Traveller in any capacity and was aware of their existence has a special affection for the LBBs and with good reason. Now, I'm not suggesting that T5 LBBs be written in the same way that T1 LBBs were written, but by god man, understand your customer base. Understand that remarkably few people are telepathic enough to understand what the fuck you're trying to accomplish with arcane and esoteric bits of writing like the Character Creation chapter (character creation has always been a sticky subject in Traveller but come on T5, this shit makes no goddamn sense or anything like it).

I'm starting to get worked up again, I need to calm down.

So, in the end, Marc Miller has provided us with an unusable version of Traveller to go on the shelf next to the other unusable or uninteresting versions like TNE. Looks like, if I ever want to play Traveller, I'm going to have to go with MGT; while their rules might be occasionally poorly-written and require massive amounts of revision, at least the rules are simple enough that such revisions are possible. Until T5 gets LBBs that make sense out of the game, I'll play Hulks & Horrors. Or Stars Without Number. Or Thousand Suns. Or whatever, as long as its playable.
HnH Traveller