14 May
While I keep rehashing exactly what it is that I'd like to include in the next "Elves of Ur-Hadad" post,  I was slightly afraid that I was going to get lost and not move forward with other new Ur-Hadad-related material. But then, +Wayne Snyder & I were talking more about the city itself and just how you'd get in. Here's the result.

While the Squat and Pilgrimtown are the most famous of Ur-Hadad's several gate towns, along with the East and West Gates that they surround, these two are not the only gates into the First City. Indeed, there are two northern gates (three if you include a portcullis-protected river gate) and the wonderfully defensible "southern gate" (actually the harbor the city nestles around) and whispers abound of the "gate invisible," the series of portals by which wizards, sorcerers and other arcanists come and go from the city. Each known gate has at least one Captain who is responsible for maintaining the order and integrity of the gate (the Sea Gate has two Gate Captains, each of whom helms colossal warships), along with the military compliment to accomplish his mandate. These Captains and forces are maintained by Hadadi noble houses, following a long-standing tradition of nobility sponsoring specific gates; today, the Grand Vizier (much like the last century or two of Paschas before the current period of regency) honors these families by granting a "license of sponsorship," whereby the honored family is granted the responsibility for maintaining a particular gate. These Gate Captains are also responsible -- directly or indirectly -- for the gate towns that spring up around the entrances as well as the conduct within the city of those who have passed through their gate; it is perhaps for this reason more than any other that the Gate Captains do not issue as many entry visas as demand calls for. 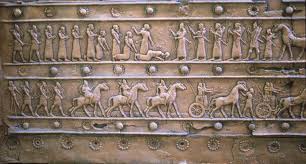 The northwestern most gate of Ur-Hadad, the Gilded Gate is one of the two best-defended gates in the city. Here, the walls are engraved with bas reliefs that trace the lineage and familial histories of each of the great noble houses of Ur-Hadad, and even many of the minor ones, such that, to pass through the gate, one must demonstrate one's own connection to those recorded there. A noble must, for instance, stand before the great wall of the First City, before the Gate Captain's due representatives, and recite his own heritage, at least until two generations of engraved history have been recounted; then, and only then, may the noble and his entourage enter the city. 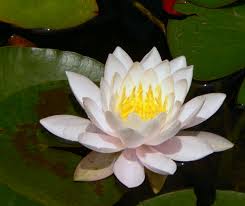 More traffic comes and goes by the Lotus Gate than by any other of the "normal" gates of the city. It is here that Captain Lokusz Barat (under mandate of the Guljilul clan of nobles) issues entry licenses to merchants from lands far and wide to trade within the city. Each license bears, on the front side, the likeness of the Captain, gesturing magnanimously toward the riches of the First City; on the reverse stands the image of a white lotus (the preferred funerary flower in Ur-Hadad) along with a scene that would be of a funeral, were the part of the deceased not clearly being played by a living victim. The implication is clear and rarely does Captain Barat have to make good on his threats, for not only is a transgressor's life forfeit, but also his wares, possessions and estate. Thus, clan Guljilul's forces and allies within the city are among the most vehement pursuers of unlicensed and visaless merchants inside of the city itself. Captain Barat is also responsible for the River Gate, a smaller gate adjacent to the Lotus Gate (and bound by the same rules and dictates), that has occasionally been ruled under a separate mandate from the Lotus Gate, but today is ruled by the same one.

The gate town that surrounds the Lotus Gate, often called the Lucrewarren by critics (and never in official correspondences), is nearly as profitable as Ur-Hadad itself, as it often serves as a wholesale and dealer's market where Hadadi merchants seek the lowest prices possible from foreign merchants and acting as middle men between the sea trade and the river and land trades. Large merchant compounds made with high clay walls dot the Lucrewarren, bristling with pike and crossbow-armed mercenaries who assure the freedom of commerce throughout the gate town.

A euphemism for the large harbor around which the First City has been built, the Sea Gate is patrolled by the forces of two competing Gate Captains: Nol Velgulassi and Ise Koluemon. Velgulassi was appointed by the traditionalists of the Partonato merchant house and is in charge of regulating the issuance and execution of "writs of trade," selling foreign and Hadadi merchants alike access to the port. Koluemon, on the other hand, was appointed by House Ulgobaz, to pursue smugglers and other lawbreakers in the harbor. Regarded by many as a loose cannon, as dangerous to the city as helpful, Koluemon's arrest and seizure of smugglers and their assets is controversial and, certain detractors suggest, selective. While smugglers attached to many other merchant houses have been detained and had the contents of their ships seized, why have no Ulgobaz smugglers been similarly detained? The sufficiently enlightened wouldn't expect anything else and regard Koluemon as little better than a corrupt privateer in the pocket of the crooked noble house in the First City.

The existence of the "Gate Invisible" is known to the majority of the mundane population of Ur-Hadad due to its most unusual feature: throughout the city, a series of faces animate to announce the comings and goings of the various wizards and wonder workers who frequent the city. "Vargazungolius, Sorcerer Penultimate and Master of Transmogrification, has left the First city," they may say, or "Shining Ur-Hadad welcomes Amor Ba'Gish, Grand Arachnomancer of Atraz A'Zul." Since none other than the greatest of magicians are ever announced in such a matter, not even the Grand Vizier himself, it is assumed by most inhabitants of the First City that these wizards use some unknown entrance to the city, a "gate invisible." 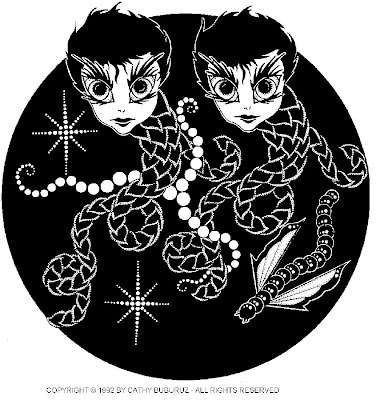 The reality is much different from what the common man or noble presumes.

Teleportation magics, while rare on the face of Ore, do exist. When Man first discovered such magics, he also learned that teleporting in and out of the First City wasn't a simple process. Instead of simply disappearing in one place and reappearing in another, in between the would-be traveler makes a brief stop over in a stone room of unknown location, large and ornate with a high, vaulted ceiling. Before moving on, the traveler must first discuss his travel plans with an immense and invulnerable demon from some forgotten lower dimension as well as present him with a small gift, a token that earns the traveler his blessing to move on. This shapeshifting demon craves gifts that conform to an ancient pattern of cycles and epicycles of aesthetics, known to Man due only to the work of the Elder Elf archivist Ascingolus (every wizard worth his salt maintains a copy of the text and obtaining one is considered a rite of passage for would-be archmages). One passage might require the first rose bud of Spring, whereas another may require the tears of a mother after her son's death and still another might require a common block of cheese or a simple chicken's egg. History records this demon's name as variations on "the Preserver," and it is believed by these wizards that, were the Preserver not present to mediate hyperspatial travel to and from the City, an ineffable fate will befall the city and, possibly, the entirety of the Ore.

Who's Using the Gate Invisible?

A wizard just entered the city; who was it? Roll d11. (1 - 2) - Vargazungolius, Sorcerer Penultimate and Master of Transmogrification. (3 - 4) - Amor Ba'Gish, Grand Arachnomancer of Atraz A'Zul. (5 - 6) - Emerikol the Chaotic. (7 - 8) - Lokerimon the Lawful. (9 - 10) - Aila Brahe, Sorceress-Queen of the Celestial Spheres and Doom That Came to Singhex. (11) - Uskoll the Uncaring, He Who Sees Through the Void. Things Get Better: The wizard seeks out the PCs and offers them a small boon in accordance with some greater design that they cannot possibly understand (wizard stuff). Things Get Worse: The wizard has a score to settle with the PCs and comes looking for them. This score may be due to something that they've actually done already, have yet to do, have done in some alternate time line or whatever. The important thing is that there's a pissed off wizard and he's coming for you.