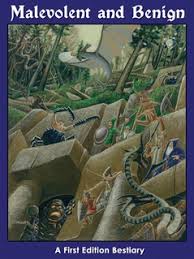 So, it's Monday again and it's time for me to pull out yet another monster book from my imaginary bookshelf. Today, I'll be riffing off of a book whose title means it should be right up my alley: Malevolant and Benign by Expeditious Retreat Press. For those of you keeping score at home, it should be obvious that the title of this thing is a direct shout out to the Fiend Folio, so award these guys bonus points for that, but remember that they'll have to deliver on some serious Foliosity here due to it. You don't set the bar that high for yourself unless you can deliver, right? Don't call out the FF if you're not ready to present on same level, am I right?

Malevolent and Benign is available from Lulu in a 128-page hardcover edition for $40 or through the usual suspects as a pdf for $10. I picked this up in pdf, so my thoughts will be based on that. The pdf is nice-looking and polished, I just wish it used links on the table of contents or in the monster lists at the back. That would have been really nice (one of the things I really loved about the Carcosa pdf was that every single reference was indexed with links). The bookmarks make up for it though, being very thorough, providing you know what you're looking for. One of the odd things about this book is that there are no "braglines" talking about how many monsters there are in the book, no chapter on what the stats mean (you know, because you've never seen an rpg book before and don't know what the conventions in use since '74 mean), none of that. A short intro and then it's straight into monstrosities. Nice. And following the monsters, some magic items you might want to know a thing or two about because they're discussed in the monsters' entries before it's time for the ever-popular "here's what sort of terrain or dungeon level you should throw these monsters into" lists (that probably came off as sarcastic, but I love those sorts of lists. I may not use them -- I'll put what I want where I want, damnit! -- but still, they're nice.). Each of the monsters here ostensibly comes from one of XRP's Advanced Adventures line, which makes this book extra-cool to me, because with how fast XRP cranks those things out, there's no way I'm owning all of them, much less just to collect all their monsters.

The first thing that jumps out at me as regards the aesthetics of this thing is the use of the Futura font (or something damn close to it) just like Grampa Gary used to use. XRP uses the same font in their Advanced Adventures line (from which all this book's monsters are culled), so it makes sense and seems even more fitting here than in that line of adventures.

All in all, the book looks really nice. The illustrations are quality and fit with the overall 1e aesthetic of the book and are in a solid quantity (just enough, not too few). The layout is attractive for the most part and doesn't give the appearance of wasting space for the sake of wasting space (*cough* Tome of Horrors *cough cough*).

The unifying theme of this book is that there is no unifying theme, just like ol' Uncle Don had when he took a bunch of Fiend Factory monsters, lightly edited them and threw them in with crap that Gygax had pooped out a year or two earlier (fucking drow! We're still paying for that one, Gary!). So, we're on good ground from moment one. The monsters tend toward the weird side, too, which is where things need to be. Just to remind, I think that the essence of Foliosity -- of being reminiscent of or similar to the Fiend Folio -- is the presence of strange "set piece" monsters that you're likely to use once or twice ever that often fill a specific niche or have some sort of trick that sets them apart and limits their versatility but maximizes their fun value.

Malevolent and Benign measures up pretty well on the "weird, tricky and useful" scale, without too many culprits coming in as being "versatile," thankfully. Here, you'll find weird birds, ultra-specific troll variants, creepy plant monsters (seriously, what's creepier than plants trying to each you or doppelgang you or drain your blood) and other stuff that definitely belongs in my (increasingly strange) dungeons.

Any of it. All of it. This shit is good.

I take an especial shine to the plant monsters in here like the vampire moss because ewwwwww. Also, you might have noticed how much I dig ape monsters, so I'll take those, too. Yeah, throw the whole thing in there, there's enough in here for me to mine (but still need new stuffs!) for quite awhile.

I think I might have talked myself into getting the $40 hardcover, but my wife will kill me. Well done, XRP, well done indeed.
1e monster Monster Monday