06 May
I put off writing this post for a few days. I meant to write it on Saturday, and then last night, but I couldn't bring myself to do it either day. It wasn't merely procrastination, it was an unwillingness bred of my desire not to discourage anyone in the field of games from creating anything ever. About eight minutes ago, I realized that I really had to bite the bullet and write this, though, because some stuff needs to be said. 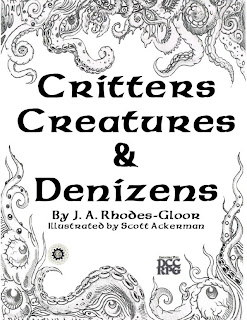 Right around the time that the DCC RPG hit the shelves, there was a whole lot of hype around a number of different product lines, some of which were available at launch, some became available later and some we're still waiting for (I'm looking at you, Tales from the Fallen Empire!). During that initial rush of hype around the game, I'm pretty sure that I first became aware of Cognition Pressworks' Critters Creatures & Denizens (hereafter CCD -- which is not the same as that religion class those of us Catholic kids who got to go to public school had to go to on Wednesday night) on the Goodman Games forums (although what I was doing on a forum, I have no idea. Looking for character sheets maybe?), where it was discussed as a book full of the sorts of monsters and such that Judges never want to bother to stat out themselves because they're too boring (wolves, giant snakes and the like). Not a bad premise. And art by Scott Ackerman? Awesome, I'm in!

CCD is currently available via Lulu.com for $14.99 in perfect bound softcover or $9.99 in pdf. For a mere $5 more, I went for the softcover. Coming in at 235 pages, this is pretty great value in print, with over 120 unique entries and 400 variations on those entries (so, say, there's an entry for badger and then 3 different versions of badgers). There are some decent optional rules for hexcrawling and, for some reason, rules for hexgrid combat (wtf? what's that doing in my DCC?) and a whole chapter on Mutations, which uses a d30, so it's okay in my book (not perfect; that's reserved for Realms of Chaos: Slaves to Darkness and always shall be). The worst guide to monster creation I've ever read rounds out the book, but more on that below.

Here, I'm going to stray from the usual "how do the art and layout get across the idea of the book" type of aesthetics discussion and instead talk about design aesthetic, since that's a big part of what attracts me to DCC. For CCD, however, I find the design aesthetic absolutely repellent. Each monster has an incredibly long and tedious stat blocks that get into ridiculously tiny and useless minutiae such as how to determine each stat for the monster, lift/drag/carry amounts (listed as individual lines!), reach (3.x much?) and other pointless stuff. I mean seriously, does this author not understand what DCC is? That is isn't just 3.xe with strangeness and some old-schooly-ness added? Looking through these pages, it feels very much like the author takes an approach toward DCC that is not one that I feel is implied by the text, the community or the gaming tradition that it descends from.

Look at that stat block over there on the right. See how long it is? See how many tiny details it tries to encompass? See how much useless info is in there? Why do we need separate attack lines for each different method of attack? Why do I need to know how much damage a monkey's kick does, isn't he going to bite instead? Why do I need exact numbers and figures for all of this crap and not just make it up on the fly?

In short, I don't need any of that crap. If I need to know a particular thing, I just decide what it is. I don't need a ton of metrics that I'm just going to ignore.

The reason for all of this pointless bloat becomes obvious when you look at the final chapter of the book, Making Critters. This chapter does not describe how to build monsters in DCC. Instead, it discusses how to convert monsters, not from any classic source of awesome monsters, but rather from 3.xe era and Pathfinder books, which I think, more than any other detail explains why the author applies a design aesthetic that doesn't seem to come close to what I'd say reflects that of DCC.

Absolutely zero. This thing should scream Fiend Folio to me. It's a DCC monster book. It has Scott Ackerman's strange and quirky art (which, to me, feels like an old school Brit Fantasy zine). This should have the Foliosity cranked up higher than it is here. One of the stated goals of this product was the generic nature and that it was to contain monsters that are supposed to be boring to write. Yes, there are some unique monsters here, but the only things that feel particularly Folioic are the undead presented, which are, quite wisely, presented as a set of tools to create unique and interesting undead.

To be frank, probably not much. I don't see much point in including monsters that aren't interesting enough for me to have created on my own. If I'm using someone else's monsters, it's because they got me interested or excited enough to want to include them in my adventures. Here, there's not much interesting stuff to be found, and what is there you need to dig through a mountain of stat block to find. I guess if I decided to run a DCC hexcrawl, I could use this book for random encounters, but I don't see much use beyond that.

I wish I still had my $14.99. I'd have bought Prison of the Squid Sorcerer in print instead. Then again, for me, it's probably worth the price for a book of Ackerman art, so maybe if I think about it as that with some game stats thrown in, I'll be happier. For now, though, I don't see myself using this for the intended purpose, not for a long time at least.
DCC monster Monster Monday