28 May
No, I still haven't finished up that elf post. I have a schedule to keep, people, and I can't always get to everything. For today's #AtoZRPG, we're on to a hard letter, "H," and so you're getting a rare treat: a look inside the mind of the Metal Gods of Ur-Hadad players and an in-joke that we found hilarious. While we were killing some mushroom people in the Undercity of Ur-Hadad while Edgar, someone (I honestly can't remember who) called them "goblins," but must have yawned when he did so, because it came out as "gerblins," in a voice that sounded part-way between the Swedish Chef and Lumpy Space Princess. Since there are no such things as "goblins" or "hobgoblins" for that matter, the "herbgerblin" of Ur-Hadad was born. We laughed for far too long about the herbgerblin (you can probably get most of the Metal Gods players to lose their shit if you say "herbgerblin" to him), and decided that the herbgerblin actually needed to be a thing. So, here you go. 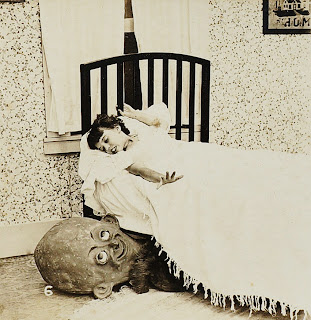 In a world such as Ore, it is easy to forget that no matter how fantastic the things that actually exist are, the imaginations of those who live on her bear even stranger fruit. In a world rife with vermen and Beastmen of all stripes, in a world where the Sargovax of Pluur consumes everything in its path (even cities), where godlike sorcerers call down horrific plagues and nameless maledictions, things as simple as the archetypal "monster under the bed" may get lost in the shuffle, but a clever observer should never doubt that the mind that conjures forth such a monster is capable of creating far more fantastic things than ever will actually exist on the face of Ore. For each presumably-imagined creature that Man discovers to actually be a living, breathing being, at least ten more chimerical "herbgerblins" (the catchall term for such imaginary creatures) are invented. In fact, most sages regard all creatures recounted by travelers -- until sufficient evidence of their existence is provided -- as herbgerblins.

Though the exact etymology of the term "herbgerblins" is not accurately recorded, one of the most popular explanation suggests that a traveler from some other sphere, upon witnessing the diverse peoples and monsters of Ore, was surprised that there were no "herbgerblins" to be found here. The question that followed, of course, was for an explanation of just what a "herbgerblin" was; the answer was so disappointing that the visitor was more or less laughed off the face of Ore. Ever since, the term "herbgerblin" has been applied to the products of overactive imaginations, often as a term of derision.

Among common folk, superstition often blames the unexplained on herbgerblins until a more reasonable explanation can be found. Small thefts, goat mutilations and unexplained circles and patterns found in crops almost always get blamed on fictional herbgerblins first, until investigators prove that vermen, goat-sucking abominations or space aliens are behind the nefarious activity. Some villains and monsters exploit this blame-throwing, giving their black deeds a veneer of herbgerblin-like incredulity just to throw commoners off the scent. Often, despite the best evidence to the contrary, such common folk continue to foster a belief in these monsters of myth and folklore; nefarious hucksters and swindlers will always be on hand to take advantage of such irrational and persistent beliefs.


What's Up With Those Herbgerblins?

What are these herbgerblins, anyway? Roll d11. (1-2) - (Scooby-Doo plot #1) It was Old Man Jerkins all along! The herbgerblins are really just the old codger hermit with a grudge against the townsfolk. Bonus xp for the rubber mask. (3-4) - The so-called herbgerblins are really just small creatures of moderate intelligence who have passed through the bleed from the Dreaming Dimension that is the homeland of the elves. Exactly what these fairy-like beings are or want is not immediately obvious. (5-6) - (Scooby-Doo plot #2) The mine's not haunted after all! To keep nosy village folk away from his secret mine, the crotchety miner has trained his helpful mining monkeys to carry out herbgerblin-like pranks and hi-jinks to exploit the ancient legend of the mine hiding a nest of mythological creatures. Bonus xp for finding the ownership papers that state that the mine is owned by the townsfolk, collectively. (7-8) - The herbgerblins may be the spawn of the Old Ones, the result of sorcerous experiments or merely the raw stuff of creation gone mad. A never-before-seen abomination wreaks a unique brand of havoc on the villagers and their livestock. (9-10) - (Scooby-Doo plot #3) It's all smoke and mirrors! The handsome, credible-seeming heir is using some sort of mechanical and theatrical contrivance to drive off the other heirs after his desired birthright. Bonus xp for finding the projector and smoke machine. (11) - Who says that there's nothing under the bed? Some child's fears have taken physical form and become a literal creature of nightmare. Things Get Better: The herbgerblins' agenda doesn't include doing harm to people or animals. Instead, if forced into combat, they'll try to escape or do subdual-style damage. Things Get Worse: The herbgerblins are not content with merely causing mayhem or chaos, but actively seek out ways in which they can inflict maximum death and destruction. Not only will they fight to kill, but they will always attack the weakest enemy possible in hopes of killing as much as possible.