Swords And Wizardry Is The Rosetta Stone of the OSR

Folks, it's Swords & Wizardry Appreciation Day, as I'm sure you're aware. All across the blogosphere, folks are taking the day to talk about Swords & Wizardry, write new material for it, and generally show the love for a really well-built system that stands astride some middle ground between retroclone and OSR-style reimagining of an early edition.

In this, S&W is not alone. Retroclones are everywhere these days (you know the list, I shouldn't have to tell you), altered semi-retroclones that cleave close to original rules but change some things substantially (LotFP's Weird Fantasy or ACKS, for example), OSR-style games (like Blood & Treasure, DCC or Red Box Hack or, hell, even Dungeon World) and reissues of the original games (whether in print or pdf) are all readily available and widely played within the OSR community today. So, other than being a retro-game (I wouldn't call it a retroclone) of OD&D+ (by which I mean OD&D plus the original supplements), what makes Swords & Wizardry different? Simple: its accessible mechanics and traditional game elements reflect both where D&D-based games have been and where they've gone. Past and present, all in one, without any messy pretension that can accompany such games and with all of the mystery, horror and adventure that the name Dungeons & Dragons implies. It's because of these accessible mechanics (no crazy sub-systems here!) and traditional (read: shared by many if not most OSR games) game elements that S&W has a unique location within the OSR; it is a crossroads of sorts, where elements from every edition (more or less) can be found cross-pollinating and where these elements can be understood in terms of each other. Where games that use AAC can hob-knob with DAC games and Fot-Ref-Will saves can exist next to hydra-style saving throw categories.* Swords & Wizardry is, quite simply, the Rosetta Stone of the OSR.

Let's take a closer look at an issue or two to see exactly what I mean. 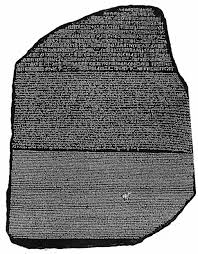 Monsters! Who doesn't love monsters, right? Every DM everywhere uses monsters of one sort or another to reasonably shorten the life spans of his players' characters. That's what they're there for. Every edition, though, uses a different layout for monsters, different stat blocks, even different rules governing them. Basic Fantasy, for instance, uses AAC (ascending Armor Class) while Labyrinth Lord uses DAC (descending Armor Class) and ACKS uses an AAC system that's completely different. The good news is that S&W uses both AAC and DAC that satisfies both the LL player and the BF player and requires only minimal math from the ACKS player (take the AAC and subtract 10; what's left will be an ACKS-appropriate AC). Saving throws can be a little sticky, too. Dungeon Crawl Classics uses the 3.xe-style Fort-Ref-Will stuff but BLUEHOLME uses (what I call) hydra-style saves*. S&W ignores the whole thing by giving characters and creatures a single saving throw target number that is then modified in specific circumstances (clerics get +2 vs. poison and paralysis, for example); while you don't need to port this system over to your game whole cloth, it does present a simple, on-the-fly way to run saving throws that fits many retro-games. What's that you say? You need an ascending save bonus for your DCC game so that you can roll against the spell DC of that Ekim's mystical mask your elf just cast? Well then, subtract the saving throw target number from 18 and add in any relevant bonuses. Done. There you go.

While we're on the topic of monsters, this is another area where Swords & Wizardry shines. The Core and Complete book have very comprehensive listings of monsters of the sort that most adventures should encounter. But wait, there's more. Tome of  Complete is absolutely huge and contains every monster from the original series of Tomes. Here's the kicker, though: to make up for lost space, since the original 3.xe/Pathfinder version of these monsters had ricu-long stat blocks, Frog God added extra flavor text to each monster entry detailing a lair or unusual encounter for the monsters included. Effectively, this is like a butcher telling you "Hey, I cut all of the fat off that meat since it wasn't going to be useful to you anyway and to make up for the weight, I gave you more meat." More useful stuff to stand in for the useless stuff? Thank you very much. As if that wasn't enough, Frog God also recently released Monstrosities for S&W which, while it might retread some of the same territory (I don't have the book yet, but I've read that a few monsters from the ToHC are duplicated here, but not enough to make people upset), follows the same "here's extra info that's far more useful than extended 3.xe/PF stats" logic of ToHC. Given the Rosetta Stone-nature of S&W, these colossal monster books can effectively be used for any edition/game! Let that sink in for a minute.

Nearly every OSR-style product line supports itself through adventures, modules, scenarios or whatever you want to call them (ACKS doesn't do this, but just about everyone else does) and it often seems like the more detail goes into these adventures (especially system-specific detail), the less useful they can be. Think about B1: In Search of the Unknown for a moment. So few game mechanics are included that this adventure can be equally well-used for Holmes, Moldvay B/X and even Mentzer BECMI (hell, I used it for AD&D 2e back in the day). By a similar token, S&W adventures are being written with as few mechanical details as possible. While I'm the sort of gamer who appreciates systems with skills or feats or proficiencies (I love the proficiency system in ACKS so much!), I feel it does detract from the usefulness of any product when specific uses of these skills get directly called out. I know I'm preaching to the choir here, but one of the best parts of, say, MCMLXXV to me was how absolutely nothing in it screamed "OMG THIS IS S&W-SPECIFIC STUFF THAT YOU CAN ONLY USE WITH S&W!" That's refreshing. I can use it for S&W, or for LL or for ACKS or DCC or BF or LotFPWF or whatever the hell I feel like!

Here's the trick with S&W, though: things work both ways. Not only can I take S&W monsters and modules (how the hell is there not a retroclone yet called Monsters & Modules? Or is there and I just don't know about it yet?) and use them in, say Astonishing Swordsmen & Sorcerers of Hyperboria, but I could also easily take a LL or BF or B-series or even DCC adventure and use it in S&W! Yeah, I might need to change a thing or two here or there, but for the most part, I can pick up and run any of these adventures with S&W with a moment's notice. Granted, this is easier with OSR-style games than, say, taking a 1e module and running it in 4e (which is practically impossible without tons of prep work), but S&W makes the process so much easier.

So, as the blog posts roll in across the interwebs for Swords & Wizardry Appreciation Day, remember that S&W isn't just another retroclone or retro-game, it's the Rosetta Stone of the OSR, a sort of common language that we in the OSR community can use to trade ideas back and forth regardless of what "game language" we speak at our home tables.

*Hydra-style saves: This is my tongue-in-cheek name for saving throws where the categories describe specific effects that are being saved against. Things like Death, Poison or Paralysis. Maybe Spells or, my favorite, Rod/Staff/Wand (could we come up with a more phallic-sounding save category?). It seems like every edition/game renames each head of the saving throw hydra, focusing on the things that become important in that edition of the game.
#SWAP OSR SnW