29 April
If you're reading my blog, the chances are that you love monsters. Chances are that you have a favorite book full of monsters, but that doesn't mean you stop looking. No monster book can ever match the sheer majesty and strange perfection of the Fiend Folio, but that shouldn't stop folks from trying. And so, I introduce Monster (Book) Monday, which should be self-explanatory. So, what's first on the "is it anywhere near as good as the Fiend Folio" block? How about 1986's AC9 The Creature Catalog. 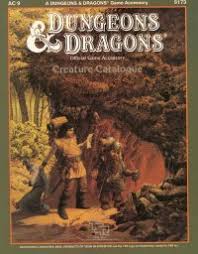 There's always been this shocking disparity in the way that monster books were produced from the Dungeon & Dragons franchise under TSR. AD&D had three monster books in print by 1983; one was okay (the Monster Manual), one was pretty good (the MM2) and one was the best fictive bestiary with game stats ever published (duh). The rest of the D&D hobby had to wait until 1986 to get its first (and only under TSR as far as I can tell) monster book, which was mostly a collection of monsters that had previously appeared in D&D modules from as far back as the BX era (although, to be fair several were written for the Holmes Blue Book D&D but didn't see print until BX). Although this was a BECMI-era release, the Creature Catalog has an older-school feel, not at all like the AD&D products that shoved a new setting down our throats every five minutes.

The skinny is: she comes in at 96 pages holding a ton of monsters (somewhere above 280 of them), many of which are reprints from modules and other disparate sources, but around 80 of which are brand new to the volume. As of this writing, it has not yet been released on DnDClassics.com, but you can still find it on eBay for around $20 or so. It was produced by the TSR UK team, so it has the same funky vibe and awesome aesthetic as the UK-series of modules for AD&D. 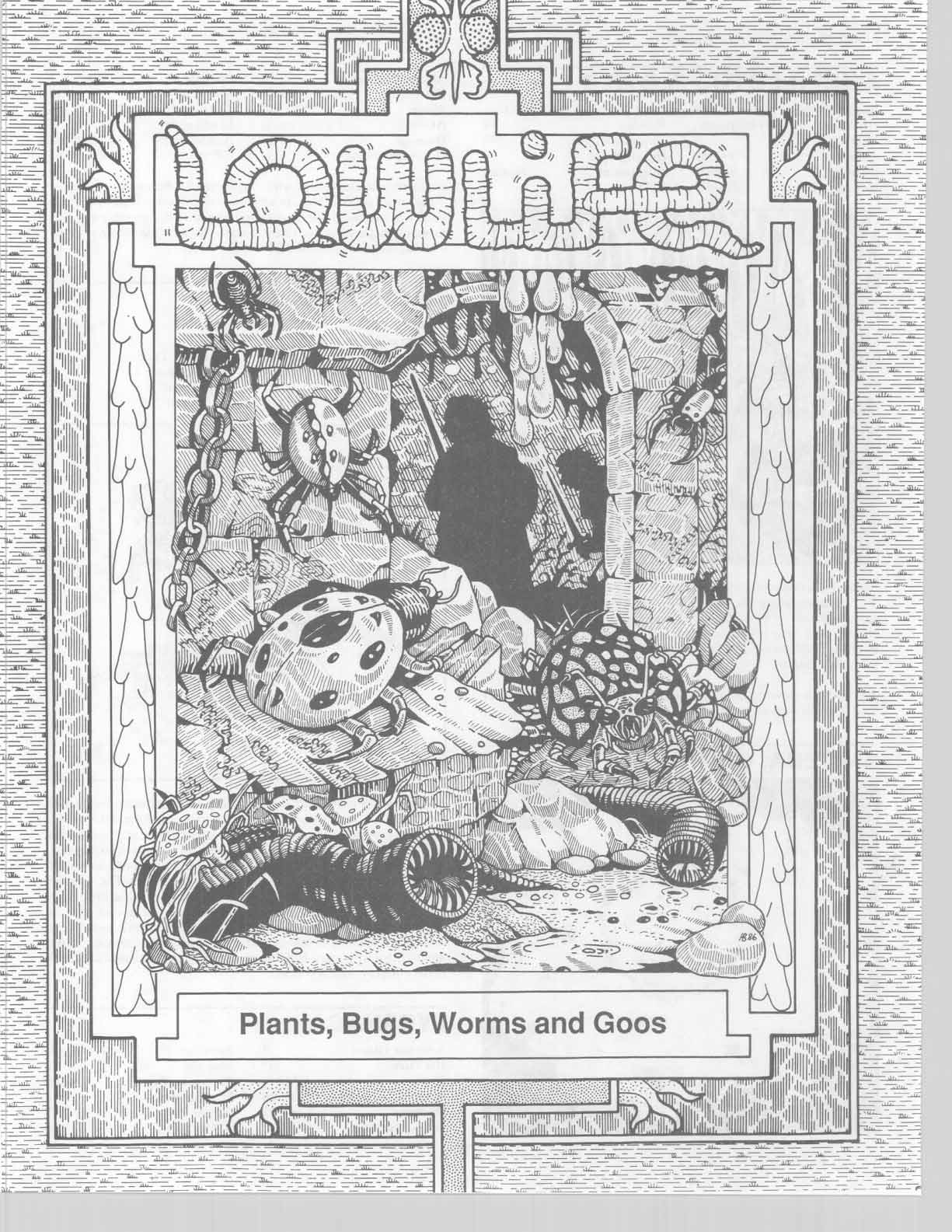 I just mentioned that the TSR UK team were the folks who put this one together and this book definitely shows off that team's particularly brand of high-quality, quirky illustration backing up a solid design aesthetic. Monster types are divvied up into different categories: Animal (Mundane, Extinct and Giant), Conjurations (Magical and Other Planar), Humanoids (Tribal and Solitary), Lowlife (Plants, Bugs, Worms and Goos), Monsters (and Other Fantastical Creatures) and Undead (Mindless and Malignant). Each category gets its own section in the book, which are separated from one another with full-page "chapter frontispiece" style illustrations that try (and succeed, in my mind) to get across the idea of what each category includes. The chapter on Lowlife, for example, starts with an illustration of a bunch of toothed worms and bugs with an ooze dripping down from the ceiling while shadows on the back wall suggest that adventurers lurk nearby. Similarly, the Undead chapter begins with an illustration of undead in a graveyard; some are spectral haunts of an obviously insubstantial nature, while others are fleshly beasts clamoring from their graves. All in all, evocative stuff that tells you what to expect. The monster illustrations themselves are mostly good, but some end up being a little stilted or odd (the infamously phallic picture of the Masher, for example) and some few end up being pretty bad (the Tabi is freaking retarded-looking), but on the whole most are good and some are great.

As far as the actual monsters go, there is no unifying aesthetic to them, like in most monster books of the time, which I feel is not really a short coming, because it's not entirely true. For the most part, the vast bulk of these monsters come from prior TSR D&D modules (the Archer Bush is from B3 while the Kara-Kara come from X8, for example) and so there's a little bit of "lost and disparate tribes" aspect to them. If they weren't together here, they couldn't really be together anywhere, as if their status as orphans is the only thing holding them together. TSR UK wisely organized them into categories, I feel, to minimize this potentially jarring effect. 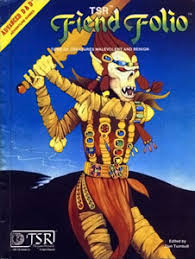 Or rather, "how close to the Fiend Folio is it?" Here's the thing, when this book was released, a lot of dumbasses had a lot of dumbass things to say about the Fiend Folio. It was stupid. It was pointless. The monsters were, at best, one-trick ponies that would show up in your dungeon exactly once before they stopped being interesting. So the fuck what? That's what makes the Fiend Folio awesome in my mind. The fact that I have all of these terribly flavorful one-trick ponies and so damn many of them that I'd never have to display the same one twice in order to put on a good show is, to me, a virtue, not a failing!

Oddly enough, at the time of its release, the Creature Catalog had to "overcome" the reputation of the Fiend Folio, since both were products of TSR UK. At the time, it was heralded as the "usable" monster book from that studio which, to my mind is hardly the high praise it seems to have been. That having been said, the Creature Catalog borrows from its older brother's sense of strangeness and wtf?-ness on more than one occasion, if only because of the previously-discussed nature of the orphan-ness of the monsters therein. Much like how the Creature Catalog is an assemblage of monsters from disparate modules, the Fiend Folio is an assemblage of monsters from different authors, different eras and different issues of White Dwarf (in which all of the FF's non-Gygaxian monsters appeared). So, there's that.

There some primely Folioic monsters in the Creature Catalog, though, and it's worth combing through to find them among the blander, more generic and undoubtedly "more usable" monsters.

So, what will Adam be stealing from the Creature Catalog? Honestly, probably a decent amount. There's a lot of "fill in the gaps in your creature repertoire" monsters here, even if most of them don't really jive with my idea of "monster." From the Animals chapter, there are some useful and evocative creatures, including an excellently-illustrated Giant Elk and the crazy smart idea of the Giant Owl (why the hell aren't Giant Owls in all of my hexcrawls already? Perhaps in the service of an Owl Sorcerer? Yep, they're in there now) and the Giant Poisonous Frog (Giant frog? Sure. Poisonous frog? Yeah, we can take it. Giant poisonous frog? Woah, slow down...). The Conjurations chapter gives us the Fundamental, some new Golems, the Guardian Warrior & Horse, some new Living Statues, the Soul Eater and some worse ideas. Humanoids doesn't fare nearly as well as Conjurations, with the Crone of Chaos, Garl, Oard and Pachydermion being the only really interesting additions. Other stuff in there might be useful to stock a section of a hexcrawl, but not really great dungeon or adventure-fodder (the Oard strikes me as particularly dungeon-worthy). Oops, I just realized that I forgot both the Snapper and the Tortle; who can resist turtle men? The Lowlife chapter, however, really shines and is full of amazing dungeon- & wilderness-worthy monsters like the Archer Bush (!!!), Amber Lotus Flower and the Giant Amoeba all on the first page! Giant Jellyfish, Killer Trees, Red Worms, Giant Serpentweed, Sirenflowers, Slimeworms, Strangleweed and the Vampire Rose (also !!!) all grace this chapter. The Brain Collector, Decapus, Fungoid, Geonid, Leveler, Nagpa, Piranha Bird, Roper (the creepiest sexual predator in the dungeon) and White Fang all call the Monsters chapter home. The Undead chapter, while short, is all good and everything in there I can see being in a dungeon I'd write. So, I feel like I'd steal quite a bit from this one.

I really dig the Creature Catalog, and it seems to me very much to be the younger brother to the Fiend Folio, but the younger brother who tries to learn from his brothers mistakes and learns the wrong lesson. Yes, to an 80's gamer, there were probably more useful monsters in the CC than there are in the entirety of the FF, but there's not nearly the flavor there. Yes, there is flavor, but it almost always comes from the original authors of the preexisting monsters (like the Decapus, Archer Bush and Vampire Rose, all from B3) and the very original presentation of the book. So, yes, I'd take a closer look at AC 9 - The Creature Catalog if it's been awhile since you have, there's plenty of stuff in there worth mining for.
BECMI BX Fiend Folio monster Monster Monday