23 April
I started the A-to-Z RPG project knowing full well that I'd never get from A to Z in a single month and I'm still very cool with that. Last week was given over to me thinking about Swords & Wizardry (and even laying down a little more work on the Whitebox hack I discussed on SWAp Day; a full-blown hack may actually be in the works, folks) and ACKS (not just +Jason Hobbs & +Brian Takle's Wednesday night game, either; I'm thinking about switching my Sunday night group to ACKS). This week, I'm getting back into the swing of Ur-Hadad-related stuff. If you were expecting another installment of "Death In Ur-Hadad," please be aware that more info is on its way, but for now, I'd like to talk about elves in the First City.

Upon visiting Ur-Hadad for the first time, many non-natives of the city are struck by its immense diversity, not merely of aesthetics and architecture, of cultures and cuisines, of languages and legends, of this that and the other, but also of species. Every civilized race (and more than a few uncivilized ones) boasts at least a small enclave in the First City, even those races driven out of Ur-Hadad by mankind when the Elder Races fell and the Dominion of Man began. Though it smacks of poor taste, even the elves, who once held Man in slavery as one of those Elder Races, are present at the fringes of Hadadi society in most castes. Often, these elves are members of that race to whom the world was lost millennia ago, who only recently were able to cross over from the strange, faerie-like dimension known to humans as "Elfland;" sometimes, though, they only pretend to be Elflandish elves but are, in reality, members of that sub-species who once ruled an empire from their seat of power in Ur-Hadad but today lurk on the fringes of civilization, known to mankind only as Dark Elves.

Vassals of the Elf King

In ages past, the strange realm of unbridled magic and unfettered growth that men know as Elfland adjoined the world of men and traffic from this remote dimension to the world was a comparatively simple matter. Elven scientists and explorers visited the world, captivated by it and eager to learn its secrets. After centuries of exploration (perhaps; the exact time frame of these events is unknown to Man), thousands of elves had colonized the world, even going to far as co-locate their shining city of Alvlantesk (from which modern Man gets his word "Elfland" and the name "elf") in both their home dimension and the world. When the bonds between the world and their home dimension grew thin, Alvlantesk and bulk of the elves retreated from the world and returned home, cut off from the world for millennia. 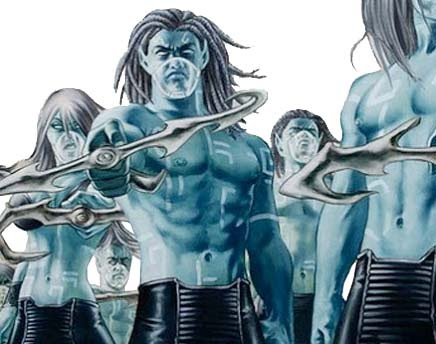 Around the time that Man began his rebellion against the Elder Races, the elves of Elfland managed to bring their dimension into convergence with the world once more. Human sages and scholars would later learn that the elves had devoted much of their study and magics of the intervening ages toward this end, but when the elves first rejoined the world, horrified at the corruption of their left-behind cousins, they took up arms against the Dark Elves (but not the lizard men or serpentmen) and appeared, for all intents and purposes, as saviors to the young human species. Even more surprising than the appearance of these savior elves, they asked for no spoils of war or part in the rulership of the empire that men inherited; they merely asked to be allowed to travel Man's lands, to live among his people and to study, to forever study, the world in its natural and magical wonder. Thus have men and elves coexisted for the past millennium, men running the world and elves learning about it.

Today, few remnants of the Elder Elves, the Dark Elves, exist to remind Man of his suffering at elvish hands and, perhaps because of this willful destruction of a painful history, Man abides elves to live even in Ur-Hadad, once the seat of elven power. The elves abroad in the world are no longer solely warriors or scientists and now elves from all walks of life call the world -- and Ur-Hadad -- home, so an elf met there is as likely to be a forester or mere chandler as he is to be a barrister or aethermancer. One thing is certain about these modern elves: as their cousins the Elder (or Dark) Elves were vulnerable to the corruption of body and soul through the temptation of magic, so too are they, and the King of Elves does not gladly suffer vassals who become warped by it; as quick as He was to order the deaths of the Elder Elves, so too will he hold prejudice against any of his kin who turn from him in supplication to other, stranger supernatural patrons.

What's he up to, anyway? Roll d11. (1 - 2) - Science! He's performing some sort of experiment the point and purpose of which may not be readily apparent. (3 - 4) - Science! He's conducting some form of scientific survey or observation and is either insistent upon your involvement (if you don't want to be involved) or his solitude (if you insist on involving yourself). (5 - 6) - Art! For art's sake, the elf in engaged in an artistic study of something in the vicinity. (7 - 8) - Art! At the behest of a patron, he's trying desperately to  gain artistic inspiration from something nearby. Equal chances that the player characters become that something or disrupt his fleeting inspiration (earning his ire!). (9 - 10) - Sorcery! Seeking answers to the universe's persistent metaphysical queries, the elf is enacting some sorcerous ritual to break through the limitations of physical space, warp time to his will, project his consciousness beyond the frail moral coil or some other big and impressive-sounding magical endeavor. (11) - Dark sorcery! In supplication to some fiendish supernatural patron or another, the elf is actively seeking to accomplish some baleful and malefic act of Chaos sorcery. Things Get Better: The PCs can aid the elf or benefit from his endeavors in some way. Things Get Worse: The PCs become the target of the elf's attention in a negative (perhaps just annoying) way.

Next time I talk about elves (I'm not going to suggest that it'll be soon), I'll look closer at the remnants of the Elder Elves and what's left of their empire within the walls of the First City.
#AtoZRPG elf Ur-Hadad