13 April
For the "D" post, I decided to pull out the big guns. It's time to talk about death.

No great field of graves receives the dead of Ur-Hadad. No vast necropolis of mausoleums accepts as tenants the cast-off corpses of the First City. Whatever catacombs line the walls of her sewers and deeper passages beneath the streets bear no form of organization and no semblance of any logic known to modern Man. In his short millennium of dominion over Ur-Hadad, Man has developed strong traditions for disposing of his fallen fellows and many more myths about exactly where the soul goes once the body fails. 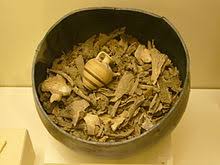 In the early years of the Dominion of Man, the priests of the death god known only as the Lord of Black Skies were an especially prominent sect not only in Ur-Hadad, but elsewhere throughout Man's realms. The recently-concluded war against the elf, serpent man and lizardman had left humankind freed from slavery but with many of his dead brothers to dispose of. The Lord of Black Skies taught that his priests should hoist the dead aloft, so that the carrion birds may find them and, devouring their flesh, fly the spirits of the departed back to the kingdom of the gods and Law. This practice worked exceptionally well at the end of the war, but within a few short years of Man's occupation of Ur-Hadad, the number of dead strewn about rooftops or on the spires of the Lord of Black Skies' new temple on the Avenue of One Thousand Gods reached such a proportion that every rainfall sluiced rot and putrescence (along with actual disease) into the waterways, causing even more loss of life. Further, the crows and vultures that the priests of the Black Skies held so sacred were messy neighbors, spreading their meals and waste throughout the First City (the sobriquet "Lord of Red & White Roofs" was sometimes used by the more irreverent among the populace).

And so it came to pass the Pascha Khal-Ulel the Second, early in his reign, outlawed the practice, punishable by death.

Faced with finding a new way to help the faithful reach their reward or risk trying to find that reward themselves without tried and tested methods. the priests of the Black Skies attacked the problem from a theological, historic and cultural standpoint. Ultimately, a young accountant with an eye towards efficiency suggested to the High Carrionite that perhaps flesh might bear souls aloft into the sky even if it were in the form of ash. When early experiments in cremation resulted in an overall decrease in the number of water-borne illnesses, roof cleaning expenditures and unprophesied hauntings, the High Carrionite immediately announced that the celestial condor had ordained the practice of cremation a right and honorable mode of disposal of the dead. Within a scant few years, cremation had become a sacrament.

Today, cremation is so ingrained in Hadadi culture that every spring, a festival called the Feast of Ash is celebrated. For a week, priest of the Black Skies distribute the collected ash from the previous year's cremations and scatter them -- mixed with dyes of different colors -- across the massed crowds waiting the blessing of their ancestors. Coated with ancestors' remains of rainbow hues, the hedonistic saturnalia that is the Feast of Ash is regarded as the spirits of the departed's last opportunity to enjoy the pleasures of the flesh and so all residents are encouraged to help the dead find fulfillment at the bottom of a bottle, in haunches of traditional walrus meat or between the thighs of a willing accomplice. It is said that the dead make their particular tastes known to the people their remains coat, and, if properly sated, will bless the "ridden" reveler and his household; should the spirits be displeased, however, the reveler suffers a minor curse.

I Know What You Did Last Feast of Ash

What vice did you indulge at the spirits' behest. Roll d11. (1 - 2) - Gluttony. You ate every walrus in sight. (3 - 4) - Lust. Yup. You went there. And there. And there. Oh, and there, too. (5 - 6) - Intemperance  You still don't remember where you parked your horse. (7 - 8) - Narcotics. The scent of Purple Lotus still clings to every article of clothing you wear. (9 - 10) - Athleticism. Maybe the ghosts who rode you were dancers in life, or gladiators, or something similar that made you want to dance and fight and run and jump and climb trees. You don't remember much of the festival, but your muscles ached for a week afterward. (11) - The Purple Meat. The ghosts that rode you knew more about the good stuff than you could ever have expected. Things Get Better: The ghosts of the recently dead that you sated bless you and your house (gain 1 point of Luck in DCC, 100 xp per level in most other systems). Things Get Worse: The ghosts are not appeased or amused by your Feast of Ash antics and have cursed you (burn 1 point of Luck in DCC or take a 5% penalty to xp for one year or until a Remove Curse spell is cast on you)!

So, normally an A to Z Challenge post wouldn't have multiple parts but I've got a lot of ideas on this topic and far, far too little time to push all those ideas out of my corrupt little noggin and onto the imaginary page. It might not be tomorrow, but the funerary rites of Jallur, the god of trade and the sea, as well as a glimpse at the afterlife in Ur-Hadad.
#AtoZRPG Ur-Hadad