30 March
I've previously talked about how much I like the retroclone BLUEHOLME: it's a slick presentation of the original game rules as reorganized and edited by Dr. Eric J Holmes for his Basic Box edition of D&D. Dreamscape Designs is ramping up production of the BLUEHOLME Compleat rules (a full version of the game expanded beyond the 3rd level, apparently going all the way to level 20, with new classes and races) and even started up a new G+ Community for BLUEHOLME (which can be found here) so now I can talk to folks about BLUEHOLME and not have to use a forum to do it (god, do I hate forums!). All of this, from my perspective, has popped onto my computer screen in the last half an hour or so (maybe a little more), so of course I've got BLUEHOLME on my mind. Not being the sort of blogger who just posts news about the RPG industry (how much time have I spent here talking about James Maliszewski and the Dwimmermount project? Oh yeah, none.), you know there's got to be a "content opportunity" here, right? Of course there is!

So, when I started reading through BLUEHOLME the very first time, I made a serious mistake: I thought it had gotten something from Holmes very, very wrong. So I put it down. Left it on the pile of RPGs to get to to read some time when I've got time for it and the inclination to do some RPG reading. Then, someone else, I think it was +Erik Tenkar, posted about BLUEHOLME being the best approximation of the Holmes rules he'd ever seen, so I dove back in, to both BH and Holmes, just to verify. Sure enough, yes, the thing that I thought they had gotten wrong, they hadn't; it was me mis-remembering things all long. Along the way, I discovered that I really enjoyed BH and not the least because of the excellent and evocative use of public domain art. The art served not only to create a style reminiscent of the original line artwork of the Holmes edition, but also ended up implying a setting to me that I really enjoyed, one that Dreamscape Design ended up reinforcing again when they released their (free) module the Maze of Nuromen.

So, as I see it, what is this magnificent aesthetic that has seized my imagination and makes me all googly and giddy inside? Take a look at that cover there. That dragon is not the sort of dragon drawn by post-genre fantasy artists, nor is his would-be-slayer a post-genre dragon slayer*. This all very pre-genre stuff here, which a lot of public domain art tends to be, what with the age of almost all of it. In fact, all of the art in BLUEHOLME itself comes from two guys: Henry J. Ford & Victor R. Lambdin. Go ahead, check them out on Wikipedia. Well, you can check out HJ Ford. Apparently, this was not the first "blue book" he ever appeared in, either (the first would be Andrew Lang's Blue Fairy Book, published in 1889). The style used by these artists may well be regarded as anachronistic and antique by modern gamers accustomed to anime heroes from games like Exalted or D&D 4e's hyper-hero everyone's-an-Olympic-gold-medalist art. Yes, it is old school, even older-school than most old school around today, and that's what makes it kickass.

Dreamscape Design goes keeps up the oldest-school feel in their module the Maze of Nuromen. Here, all of the work comes from Harry Clarke's illustrations for Bayard Taylor's 1890 translation of Goethe's Faust. Here's the thing: I've loved Clarke's illustrations since I first got my hands on a copy of Bayard's Faust decades ago. Seeing them here was nostaligic in the way that I suppose BLUEHOLME itself might be nostalgic for folks who were raised on Holmes (I wasn't; I was a Mentzer child; my love of Holmes is a product of  my modern perspective). Bayard's Faust is amazing in that he preserves Goethe's original rhyme scheme and meter, a crazy difficult task that took 20 years to finish; Clarke's haunting and often bizarre illustrations fit right alongside that sort of obsession, which instills in me a sense of Lovecraftian super-consciousness as if the mad translator (interpreter, really) had found some secret insight into the fabric of reality through his obsession with perfecting his art; Clarke does a simply stellar job of invoking not only the original text and its very solid translation, but also of, in my view, drawing the reader/viewer in to that half-insane world of the frenzied artist who labors for twenty years just to get a translation right. Clarke's art, therefore, is a perfect fit for Bayard's pursuit of the perfect translation, Faust's pursuit of perfect knowledge and Nuromen's pursuit of perfect freedom. 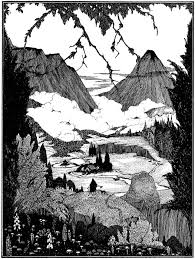 Right, but what does all that artsy mumbo-jumbo tell me about the implied setting for BLUEHOLME? Plenty. Before I go any further, let me express that I have no special knowledge of what Dreamscape Designs and Michael Thomas plan to intend as an implied setting for BH, and that all of what follows is purely my own reaction to the art that's presented in BH and the general aesthetic created by the books themselves. To me, it's the same aesthetic found in The Cabinet of Dr. Caligari, Buechner's Woyzeck, and German impressionist theater. It's the aesthetic of the Continent, of a Europe not unlike that found in LotFP's Weird Fantasy, but without all of the reality-rending cosmic horror (well, less of it, anyway) and Goethe's Erlkoennig instead. Half-fairy tale, half-heroic lay with a dash of humanist moralism, the art of BLUEHOLME pushes me to expect, as an implied setting, the backdrop of a Central Europe-like world where elves steal children in the night, dwarves trick men into pacts for their souls and wizard-scientists treat equally well with demons of the nether and the laws of physics itself. Where elector princes jockey for political favor while paying lip service to protecting their common folk from the forces of Chaos that threaten to burst in the door. It's WFRP where the grottiness is replaced by otherworldly, haunting beauty. It's Weird Fantasy where the impending doom is replaced with morals at the end of the story. This is BLUEHOLME!

Or rather, this is what got me excited about BLUEHOLME, but may not be the intent of the publishers.

Maybe it's the fact that I studied German language and literature for so long, but I freaking love the idea of a world informed by German folk and fairy tales mingled with the humanist drama (and implied cosmology) of Goethe & Schiller set against the backdrop of satirical absurdism of Buechner & Brecht. If I were to run BLUEHOLME (which I get excited about the prospect of doing every few weeks, then I realize my gaming schedule is packed tight with all the crazy shit I play and run), this would be how I'd do it and the world in which the players would find themselves. I'm sure that most players' experience with all of the literary and theatrical references I'd be bringing to the table are pretty limited, so I'd have to do extra work to bring the setting and tone to life. Luckily, choosing the art they have, Dreamscape Design has already pushed me down the right path.

*By "post-genre" here, I am referring to the concept of D&D as a genre, rather than just a game. Since it's inception, D&D has become a genre unto itself, often twisting fantasy away from its pre-genre Appendix N roots. An excellent example of how crappy post-genre fantasy can be is Dragonlance. I friggin' hate that schlock.
BLUEHOLME Holmes